Meet the Vegan Black Metal Chef Behind the “Seitanic Spellbook” 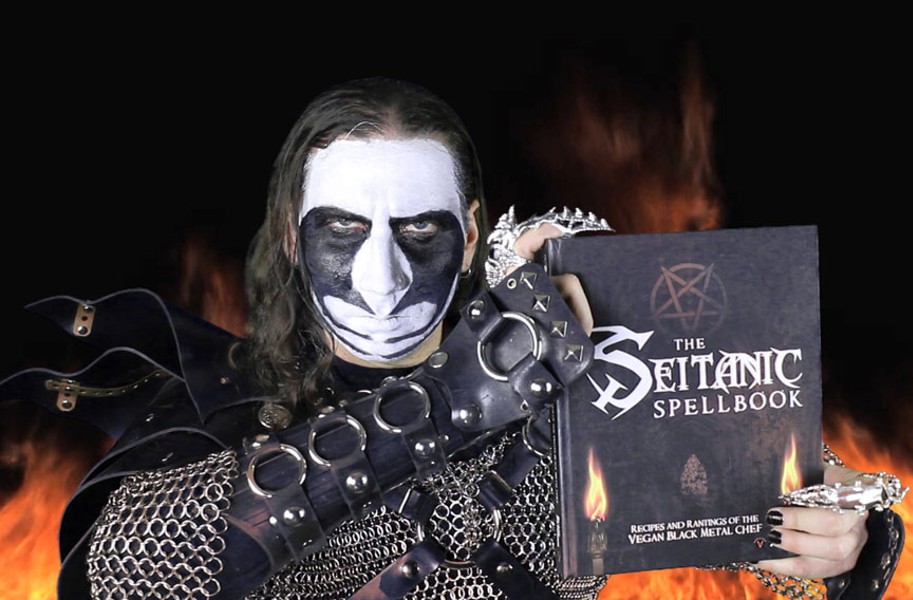 The Vegan Black Metal Chef, the avid home cook formerly known as Brian Manowitz, is a YouTube star and cookbook author who's bringing his culinary prowess to Richmond with a live demonstration and book signing. With plant-based eating considered a food trend for 2018, the timing couldn't be better.

For the costumed cooking videos he began posting online in 2011, he does it all: cooking, filming, recording, mixing and mastering the music. Rather than talking to the audience, he sets each episode to a heavy metal soundtrack of his creation, with lyrics containing the recipe and instructions. For those who don't speak metal, there are subtitles.

The man who's been listening to metal since first grade and a vegan since his first year of college in 2000 wrote his cookbook, "The Seitanic Spellbook" — seitan is meat substitute made of wheat protein — to encourage others to try veganism.

Style: What were your expectations with your first video?

Vegan Black Metal Chef: I didn't have any other than hoping people learned to make a kick ass pad thai and were entertained watching it.

But you're hoping you can convert people to veganism?

Absolutely. Not only do I hope to help people on their new or old vegan journey, I teach a doable form of veganism for the masses. Everyone can do it, especially if they choose what goes into their mouths and on their bodies.

Where does the inspiration for your recipes come from?

I'm self-taught. I learned to cook well by experimenting a ton and coming up with what became the basic cooking concepts in each section of the book. The methods of doing things are the it.

I wanted to write a cookbook about three years into doing the videos. I found that I had many concepts and dishes to show people, but the videos take so long to make. I wanted a format I could get a lot out in. There are hidden videos for the other dishes in the book that aren't as produced as the standard videos on my channel. They're more for people who just want to see how to make something.

So it's easy to use?

I'm a very visual person, so there are pictures of each step along the way of every main concept in there. There are also QR codes to scan next to each recipe that bring up a video of how to make it. The videos are essential, not just a side aspect

What can Richmond audiences expect?

They'll learn how to make some awesome vegan jambalaya and pasta Alfredo. It typically turns into an improv comedy show along with a rolling question-and-answer period while things cook.

How much intersection do you see between the vegan and metal worlds?

There's getting to be more overlap all the time, especially as members of various metal bands openly say they're vegan. It seems more fans are going vegan as well. It's a growing movement for sure.

Make some legendary music, help the world go vegan and make art in general to the best of my ability.