Meet the People Behind the Curtains of Richmond's Mayoral Campaigns

Scott Elmquist Ian McDermott and Charlie Hale campaign with Jon Baliles at the South of the James Market on Saturday morning.

It’s happy hour on a Friday evening, and there’s a party in the arts district.

Well, not a party in the strictest sense. Mayoral candidate Jack Berry, with his wife, Katherine, and seven supporters have phones attached at their ears and sheets of numbers to dial at a North Adams Street office. The walls are covered in maps shaded with various colors. Coffee is the beverage of choice.

Into the final two weeks of a seven-person mayoral race, there’s no time for breaks. The candidates are knocking on their last doors, holding news conferences and dutifully attending forum after forum.

Their staffers are difficult to track down. Eric Harris, Berry’s 28-year-old campaign manager, has been working full-time since July — a long stretch, he says.

“One month on a campaign feels like four months in the real world,” Harris says. “It’s all day, every day.”

If running for mayor in a midsized city isn’t the most glamorous task, the young people behind the candidates truly are in the trenches. The managers, spokesmen, spokeswomen and volunteer coordinators have become 24/7 campaign machines.

Harris, a Virginia native and graduate of Hampden-Sydney College, agreed to lead Berry’s four-person staff after hearing him speak in June.

“He was not polished, he was definitely not a politician, could not give a stump speech without notes helping him,” Harris says. “There were 16 candidates in the race at that point and he actually read off all 16 of them to these people.”

But Berry’s background in city government and other experience, and love for Richmond shone through, he says. “I decided against my better judgment to jump back on a campaign — because these are extremely grueling endeavors to say the least.”

Days start at 6. “It’s marketing, communications, financial analysis, fundraising, data analysis, projections based on polling, event planning,” Harris says. “I’ve gotten 6,000 emails this month already. You get really good at knowing which ones to read fully and which ones to skim.” 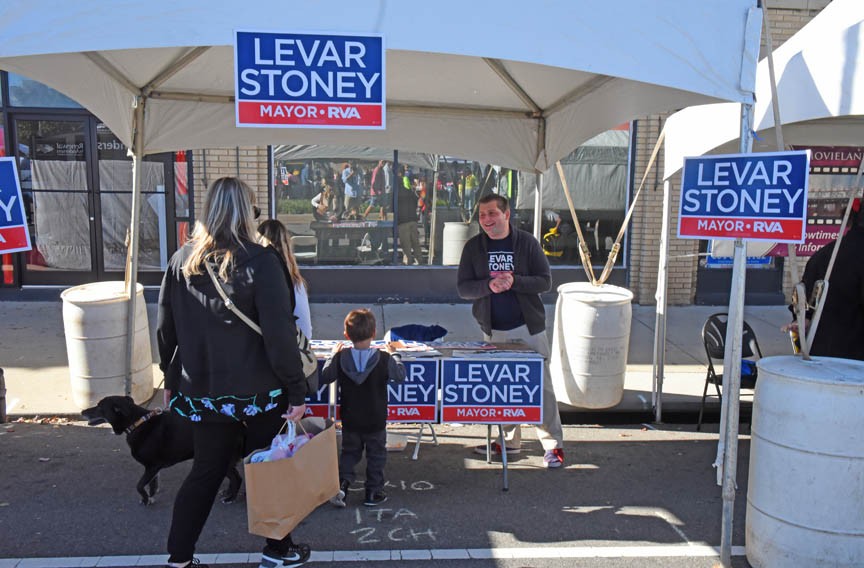 Matt Corridoni, 27, serves as communications manager of Levar Stoney’s campaign and part of a seven-person team. Campaign manager Hannah Burke, who worked on Gov. Terry McAuliffe’s campaign, brought Corridoni on board after his recent stint with Martin O’Malley’s presidential bid.

“A typical day starts at 7 a.m. I see if there are any [media] requests, read clips,” Corridoni says. “Usually with a campaign, it only takes about 10 minutes to get derailed from the schedule, so you go with the flow.”

Corridoni has a master’s degree in political communications. “Press is interesting because it’s a 24-hour media market,” he says, “so even on a local race, there’s always something that someone needs responding to. You always have to be on call.”

That lifestyle ends abruptly Nov. 8, regardless of the outcome. “It’s one of those things where, when you work on campaigns, you can’t think too far ahead,” Corridoni says. “It’s a hazard of the trade. You have to be grounded and focused.”

Staffers don’t fancy speculation about the outcome, though. “I’m not worried about Levar losing,” Corridoni says. “I’m very confident about his chances to win.”

How much does this unwavering enthusiasm cost a candidate?

Burke, of Stoney’s campaign, was making $3,725 twice a month — the equivalent of a nearly $90,000 annual salary — and Corridoni was pulling in $2,125 twice a month, according to September filings compiled by the Virginia Public Access Project. Harris made $10,000 in two installments.

Ian McDermott, 24, manages the three-person campaign staff of Jon Baliles, and has received $7,000 in two installments since July. A 2014 graduate of the University of North Carolina Wilmington, McDermott grew up in North Carolina and says he was doing “something similar” in Atlanta before coming to Richmond.

McDermott lists events for which he’ll coordinate Baliles’ appearance the next day: a dedication for the Richmond police memorial, the South of the James Market and an arts nonprofit event.

As far as job security, he says he isn’t concerned: “It’s something I’ve done before. In our spare time, we’re looking for what our next step will be. But I’m not too worried.” He says he’ll stay in Richmond if Baliles wins.

Candidate Michelle Mosby has reported $4,050 of consultant expenditures. She didn’t respond to an interview request. Candidates Bobby Junes, Joe Morrissey and Lawrence Williams reported no such expenses in the self-reported filings.

“My role is a little undefined,” Mooradian emails in response to a question about his involvement. “I’ve been managing our phone banks and communicating with the press. It’s really not too exciting.”

Mooradian came on board shortly after Morrissey’s campaign manager, Deborah MacArthur Repp, 67, was quoted in the Toronto Sun as describing Morrissey as the future “real first black mayor of Richmond” and Morrissey’s wife as fulfilling “princess” fantasies of black women.

Williams says he has a volunteer staffer. “I’ve done it before and I know how to pace myself,” he says. “I’m enjoying it.”

It’s a sentiment echoed by the other candidates’ staffers.

“If you’re not having fun, you’re not doing it right,” Corridoni says. “The best thing is the friends you make. Colleagues become like a second family. You’re working long hours, so hard toward a shared goal.”

Harris gets a Friday coffee ahead of an evening of phone calls and event planning. The coming weekend means a different version of work.

“Two weeks out is really when people start to pay attention,” Harris says. “The weekends transition to direct door-to-door knocking, and we’re hosting a 200-person barbecue.”

But so far, no outward signs of fatigue. “It can be addicting,” he says. S