Amazonian all-girl band returns to the wellspring of pop. 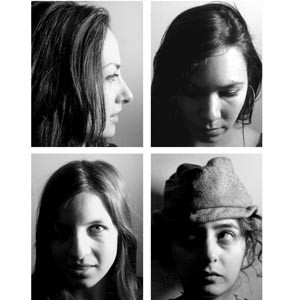 If you happen to see a mob of squealing boys running down a street in the Fan waving records, don't be alarmed — it's just Girtlemania.

The Girtles are a local all-girl group, a family actually, that performs classic early Beatles tunes. But this is no Las Vegas act. These birds are from an Amazon compound and should hence be considered part of the Amazonian Invasion.

The Girtles are: Molly Girtle (Fuzzy Baby) on guitar and vocals, Bonnie Girtle on bass, vocals, and keys, Laura Ann Girtle, of Quatro Na Bossa and Miramar, on vocals and rhythm guitar, and Marla Girtle of Bio Ritmo and Miramar on drums — she's also adopted, by the way. They have their own Brian Epsteinlike manager, known as Scuttlebutt Gus, whose previous experience includes a failed Pet Shop Boys cover project called the Sweat Shop Boys, as well as an accent coach named Mr. Singh.

Molly: Gus has a friend from work, Jesus Diaz, I'm pretty sure we're more popular than him.

Laura Ann: Considering we've been sequestered in a compound in the Amazon for the past 25 years, Jesus has a bit of a head start on us.

Are you planning on matching hairstyles or changing Richmond culture in other ways?

Molly: It seems like everyone in Richmond is working on changing Richmond culture by having matching hairstyles.

Laura Ann: We'd like to bring a sense of good, clean fun to sex, drugs and rock 'n' roll.

Scuttlebutt Gus: As multicultural as you can get while still maintaining an air of clean conservatism.

Bonnie: I spend most of my time spreading peanut butter on Fudgsicles and then eating them in front of the TV.

Have any of the Girtles been asked to hide a relationship for teenyboppers' sake?

Laura Ann: Molly is in a romantic relationship with Gus, but we hide that for the police's sake.

Laura Ann: We have a great nickname one of our fans gave us: the Girdles!

How is being in an all-girl band different from stuff you've done before?

Molly: I never have to worry about running out of tampons!

Laura Ann: I've never been in charge of the fake eyelashes for my band before the Girtles.

Marla: I'm never accused of being a diva in this band.

Bonnie: It's my only other musical project besides replacing song lyrics with potty humor whilst by myself.

Lennon once dismissed McCartney's “Ob-la-Di, Ob-la-Da” as “granny shit.” Do the old rivalry issues come into play with the Girtles? Any lingering resentment?

Laura Ann: Molly hates it when Mr. Singh comes to the studio and sits on her amp and starts his Carnatic chanting. … One day we had a business deal to sign, and I never showed up but just sent a pizza with a note that said, “listen to this pizza,” and Molly hit the roof. So there's no resemblance to Lennon-McCartney rifts.

Marla: They all resent me. I never get any respect.

As Robbie Robertson once asked Dylan during a 5-mph car ride, “Where are you gonna take this thing, man?” Are you content to keep doing Beatles songs or will you branch out into originals?

Laura Ann: Who the hell are these Beatles?

Scuttlebutt Gus: I've told the Girtles that they can start playing originals when they can pay their own bills.

Marla: I thought these were originals?!

The Girtles perform a free show at Balliceaux on Friday, May 21, at 11 p.m.