Meet the Artist Behind the Familiar Humble Moniker 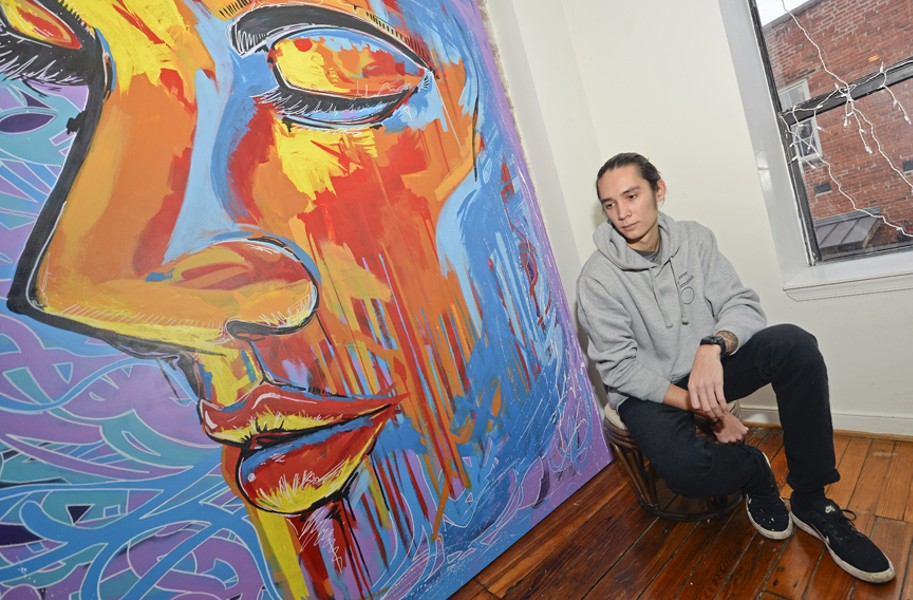 The piece is massive. It feels more like a wall than a canvas. Standing 11 feet tall and 7 feet wide, it towers over us. The woman's face at the center is tranquil with confidence and calmness while the world around her swirls with chaos.

You might describe it as a 21st century Jean-Michel Basquiat with the flair of Vincent Van Gogh, or pop impressionism with a touch of Jackson Pollock. It's whatever you want it to be, but it absolutely and undoubtedly is Humble at his finest.

Kyle Harrell, better known as Humble, has been painting walls, doing illustrations and creating captivating canvases in Richmond for years. You may know his work without even realizing it. The massive dragon on the side of Fat Dragon, the patio of Foo Dog, the elephant in Mom's Siam, an absolutely epic scene in the new Green Flash Brewery in Virginia Beach, a siren in San Juan, Puerto Rico -- his work is all over the city, the state and the world.

Kevin Urbanowski, owner of the Richmond-based Pit and Peel, which boasts one of Humble's most recent murals, describes the artist's work as a "unique style in which he clearly and elegantly expresses the emotion he is portraying."

Standing in the alley of his Church Hill studio an hour before a buyer — a local businessman from Capital One — was to arrive for the piece, Humble is staring intently, quietly, anxiously, at his work with a Marlboro 27 burning between his paint-stained fingers. When asked what he's thinking about he quietly mumbles "the past."

Humble's path into the art world has been full of ups and downs and the artist's portfolio is a collection of honest emotional portrayals. He explains that the name Humble was born during a dark period of his life, after a painful divorce left him with few possessions and even fewer hopes.

"I was living on the floor of a cheap townhouse in Randolph," he says, "with no mattress and no furniture. I had a sketchbook though, and I remembered Gladwell's 10,000 hours to mastery rule. So I just started drawing."

An Eastern traditions scholar with a religious studies degree from Virginia Commonwealth University, Humble chose to dedicate himself to his art the same way a monk would dedicate himself to meditation. Luckily, an artistic role model came into his life in the form of Navid Rahman, a Richmond-bred illustrator.

Harrell studied under Rahman for months, learning how to draw in hyper-technical realism with precise line work.

"We sketched side-by-side for hours every day until our fingers literally began to bleed," he recalls. "The dedication was one of love, of mindfulness and of passion."

Five years later, you can still see the lessons that Humble learned during late night drawing sessions on the floor of that Colorado Avenue townhouse. He also developed his own philosophical process in approaching his artwork.

"The destruction of the ego is the catalyst to enlightenment," he explains. "In every piece I do, I divulge my ego onto the canvas. I wrestle with it, I hate it, then I love it, then I hate it again. It's aggressively self-reflective. In every piece, I try to destroy a part of my ego in hopes that one day I will find what it is that all the masters talk of."

Just before the buyer is set to arrive, Humble slashes the top off of a white paint pen. He then proceeds to savage the canvas he once coddled. He gives one final, violent thrash with the pen.

Kyle leans over and signs the bottom left of the colossal piece: Humble.

The artist steps back and looks at the colossal canvas. He leans forward again and strikes through his signature.

A U-Haul rumbles up the Church Hill street. It's the buyer. His smile is visible from a block away. S

The portfolio of Kyle Harrell, also known as Humble, can be found at @_h_u_m_b_l_e_.