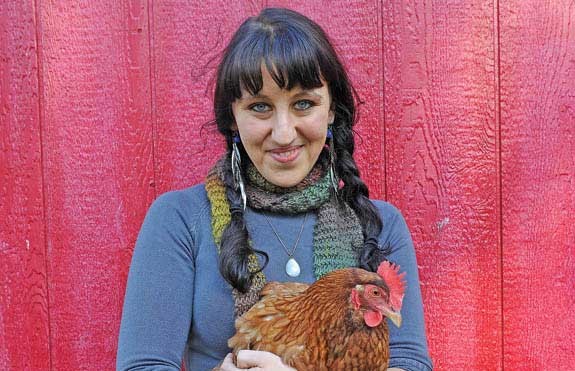 Her mission started, appropriately, during a trip to the Holy Land.

On a 10-day trip to Israel in January 2006, Jen Hurst found herself keeled over on a bus, suffering from apparent food poisoning — she and at least two dozen others, having had chicken for dinner.

But Hurst recalls some tourists who weren't keeling over in agony. "All of the vegetarians didn't have this problem," she says.

Hurst swore off meat. She became involved with the People for the Ethical Treatment of Animals, officially joining the ranks of unlikable hipsters who make the rest of us feel guilty for eating anything that summons our carnivorous desires.

But Hurst just didn't want to be one of those people. She's Jewish. "If you're a guest in my house, you eat," Hurst says. "It became a real challenge to me." Sure, there's the tofurky in the freezer, but her specialty is vegan bacon, made with tempeh, and vegan sausage gravy and biscuits, lentil shepherd's pie and, naturally, vegan meatloaf (red lentils, cranberries, carrots, celery, cashews, garlic and bulgur wheat). She started a blog, RVAvegan.com, and began teaching vegan cooking classes at the William Byrd Community House.

She specializes in debunking vegan mythology — the perception that all vegans are starving, tree-hugging hippies who get no protein and try to make the rest of us feel bad about ourselves. Hurst's home in Fulton is a reserve for furry, feathered and scaly critters: a corn snake, Sadie, to which Hurst feeds frozen mice every Saturday, four chickens (Mary, Elizabeth, Jane and Ann), who roam her backyard, and a stray pit bull mix named Xie that a neighbor brought to her. She lost interest in PETA and moved to Richmond in 2008, where she works as associate director of museum operations and education for Preservation Virginia.

Hurst tried to find a home for the pit bull, but when a neighbor informed her that Xie was tied up outside in Gilpin Court during a torrential downpour two years ago, that was it. She went out in the rain, unchained the dog and brought him home. "I guess after that I said, 'that's it — you're mine,'" she says.

Mostly, though, Hurst is known for her cooking. It's better to tolerate the meat lovers and work from the inside out. There was turkey at her home for a post-Thanksgiving dinner with family and friends (Hurst took no part in preparing it).

"I have a lot of friends that are not vegan," she says. "I'm OK with that." Hurst fixed lentil meatloaf with cashew gravy, roasted veggies and mashed potatoes. Her mother, who is traditionally a "meat and potatoes kind of mom," Hurst says, even prepared a vegan stuffing just for her daughter. "It was the first time in a long time we had a family Thanksgiving together," Hurst says. "It was wonderful." — Scott Bass