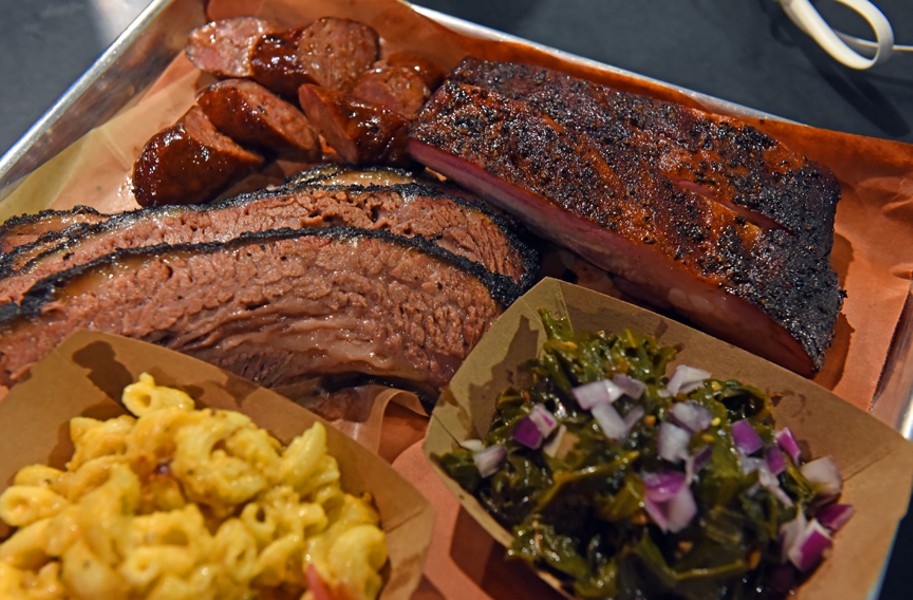 Scott Elmquist ZZQ serves up beef brisket and pork spare ribs with sides such as collard greens and jalapeño mac and cheese.

They call it "meat church," and the faithful packed the pews for ZZQ's grand opening March 3. The restaurant features Chris Fultz's famous Texas-style barbecued beef brisket and wife Alex Graf's flavorful sides. The soft open was March 1, and the faithful filled the aisles then too.

"It's incredibly surreal," Fultz says. "To look across my dining room to the bar and see it packed with people. It's like a dream."

Fultz, a Texas native, started experimenting with barbecue more than 15 years ago at home and in competitions. His slices of dark beef brisket are rich, spicy, pull-apart meat treats that will have you digging in with your fingers — which the restaurant encourages, given the rolls of paper towels on the tables and a big porcelain sink in the dining room for hand washing. In a land of pulled pork, Fultz's slow-cooked brisket stands out.

Graf oversees the execution of sides, including her beloved jalapeño macaroni and cheese, and stewed collard greens strewn with smoky bits of meatiness.

The new Scott's Addition space is large and festive, with a counter-service food line on one side of the room and a wide bar on the other. Picnic tables dot the expansive outdoor patio, and diners can watch the barbecue pros (they work overnight) wrangle three large smokers imported from Texas. Servers monitor the dining room with friendly smiles, offering drink reorders.

ZZQ pop-ups were well known for their homey hospitality, where hugs were contagious and longtime friendships were born. Fultz and Graf have imported the vibe to the new space, which architect Fultz designed for Scott's Addition. The cow mural at the entrance, cast-iron hardware, rustic wood and the three cow-head trophies mounted behind the bar all scream "Texas." Custom neon above the food line celebrates the love between the Texan and the red-headed former roller derby queen known as "Orangyna."

Fans are used to braving the crowds at Ardent Craft Ales to get a taste of ZZQ, but the new restaurant's lines are much shorter. Hospitality rules: Now, while you're waiting in line, servers take your drink order and offer brisket samples.

"When they used to host events, sometimes I would go by myself and I didn't know anybody," says Carrie Rose-Pace, a ZZQ pop-up regular who embraced Graf in a hug at the soft opening. "But because they set the tone of hospitality, I felt like family. Here, it's exactly that feeling. That's the kind of space that they've created."

We ordered bourbon and tequila as we stood in line, then walked along the counter where Fultz was slicing dark slabs of brisket into tender pink-inside servings.

After the meat slicing board, move on down the line to the sides. You can pile your tray high with brisket, sausage, beans, collards, mac and cheese, pickled red onions, red cabbage slaw, and that ubiquitous white bread that comes alongside Texas barbecue. There's even savory barbecue seitan, a wheat-based meat substitute, and the mac and cheese is also vegetarian.

ZZQ offers true Mexican Coca-Cola, made with cane sugar instead of corn syrup, but don't overlook the menu of drinks created by seasoned bar manager Derek Salerno. The bar choices are heavy on barbecue-friendly classics like draft ales and India pale ales, tequila, mezcal and whiskey. There's even a minimal wine-by-the-glass list for those who must.

Say amen, y'all, because meat church is back in session.