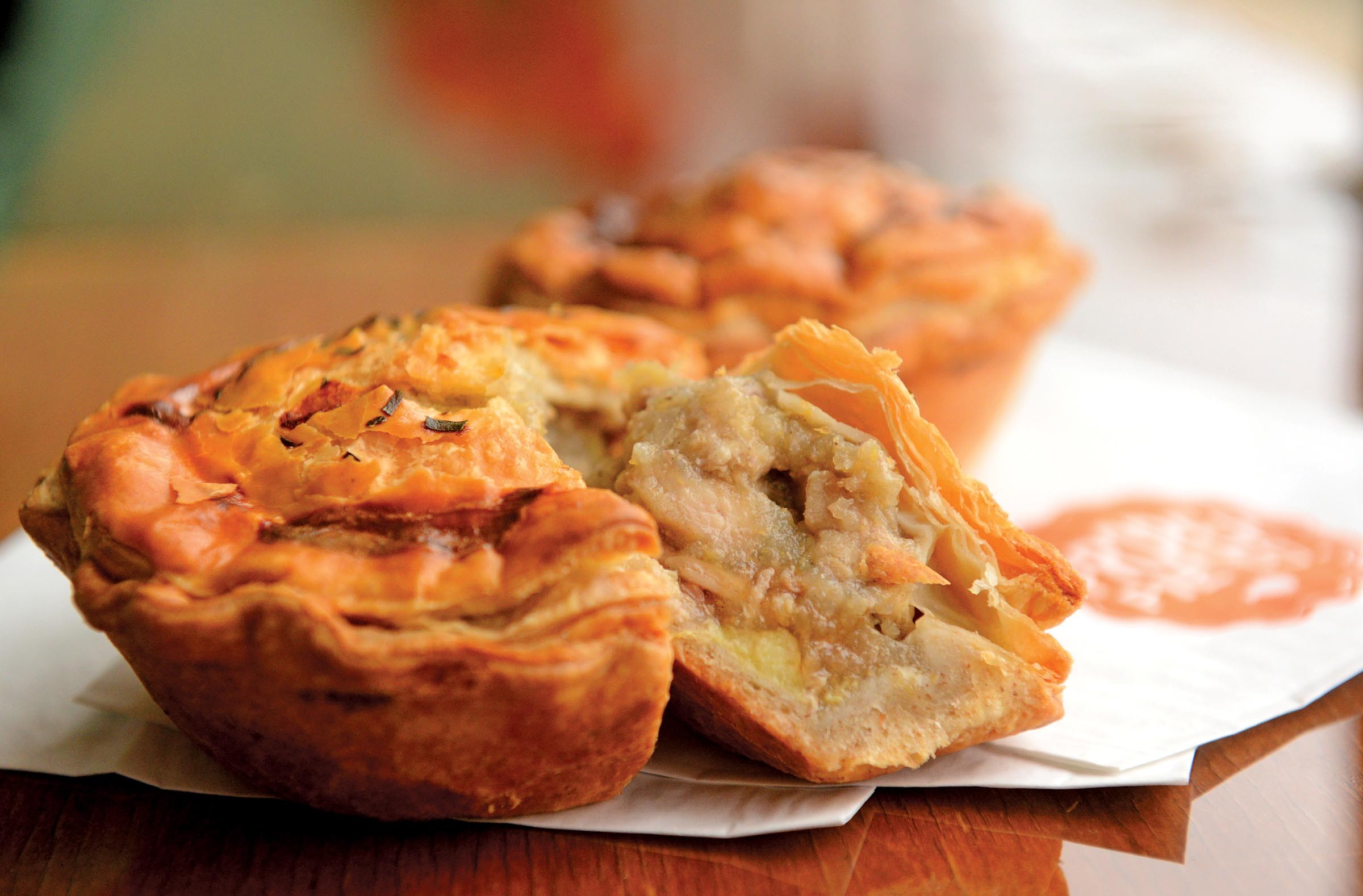 Richmond was, until recently, suffering from a tremendous problem. It lacked pie. Sure, you could get your pecan, your apple, your seasonal pumpkin pie. But where could you find a good meat pie? And, no, frozen pot pies from the grocery store won’t satisfy this craving. I’m talking the hearty, portable, flaky crusted meal loved so much by the Commonwealth countries that didn’t throw off the monarchy. Damn you, Patrick Henry! You may have freed us from the tyranny of taxation, but did you mean to doom us to a pieless existence too?

Well, now — and right in the heart of Henry’s old stomping grounds — a subject of the monarchy has set up shop, righting some culinary wrongs in this town. A chef from New Zealand has opened Proper Pie Co., selling savory and sweet pies and igniting the passion of the people.

The store had a following even before it opened. Running a successful social media campaign that included raising more than $15,000 through Kickstarter, the place initially was too popular for its own good. Overwhelmed by demand, chef Neil Smith and co-owner Nikki Price had to regroup to figure out how to make enough food to satisfy the hungry masses. Occupying a small and cozy storefront in Church Hill, the space is geared toward a low-key operation serving a few customers at a time. Some days, however, lines are forced outside, and most days the few seats inside are taken no matter when you stop by. It’s best to plan for take-out.

The star of their show is the savory pie. With a variety of fillings, including vegetarian and vegan options, the pies are at once decadent, comforting and affordable at $5-$6. The rich and flaky butter crust, and the surprisingly good vegan version, almost makes the filling irrelevant. When I get a craving, which during the research for this review has been fairly constant, it’s for the crust first, the filling second. Some of the pies would benefit from slight adjustments to the seasoning, a problem that’s easily forgivable given the shop’s obvious bent toward innovation and experimentation. That was seen in the beginning too, with Kickstarter donors given the chance to invent flavors. My favorites include the classic mince (ground beef) and cheese, spinach-mushroom with a subtle hint of blue cheese, and curried lentil and spinach.

Sausage rolls ($4.25), a British staple consisting of sausage, often minced, and seasoning wrapped in pastry, are rendered well here with a mildly spiced local SausageCraft product. The Cornish pasty ($6) — it rhymes with nasty — is decent, but on my visits the ground beef and rutabaga filling is a touch too dry, a rare disappointment. Daily vegan soups ($2.50 cup, $4 bowl) are consistently flavorful and hearty.

Proper Pie is not only making great savory pies, but also introducing other Down Under staples to Richmond. Prepare to learn a whole new food vocabulary: flat white, Anzac biscuits and lamingtons, among others. A flat white is similar to a latte, with less foam. Anzac biscuits ($2), named for the acronym for Commonwealth soldiers from the region, are what Americans call cookies, made with oats and coconut and created by soldiers’ wives to ship to loved ones in the military. Lamingtons ($3) are a revelation: A large cube of sponge cake is coated in chocolate and rolled in coconut. The thin layer of rich dark chocolate is a perfect foil for the mild sweetness of a relatively dense sponge cake while the dried coconut adds welcome texture.

There are plenty of sweet pies on the menu. Because they have perfected pie crust, the small variations needed to make good sweets come naturally. Nothing I try disappoints, though there are too many on the menu for anyone to responsibly taste them all. Apple and cheddar ($4.50 for a slice) is particularly well done, with small crumbles of medium sharp cheddar adding depth to the tart apples. Treacle tart ($4.50), Harry Potter’s favorite dessert, is made with treacle, or golden syrup that’s created during the refining of sugar. It’s combined with lemon juice and bread crumbs to make a pie that achieves the classic sweet and tart combination with a slight bitter undertone reminiscent of molasses.

There are ample offerings that may be new to Richmonders: afghans, banoffee and kumara, but the flavors and delivery mechanism are intimately familiar to Western palates. It’s a great place to expand your food world view without stretching too far. On a recent visit, I overhear a woman speaking with a British accent. I ask how Proper Pie compares with what she can find back home. “Oh, far superior,” she says. “It makes living here tolerable.” Indeed it does.