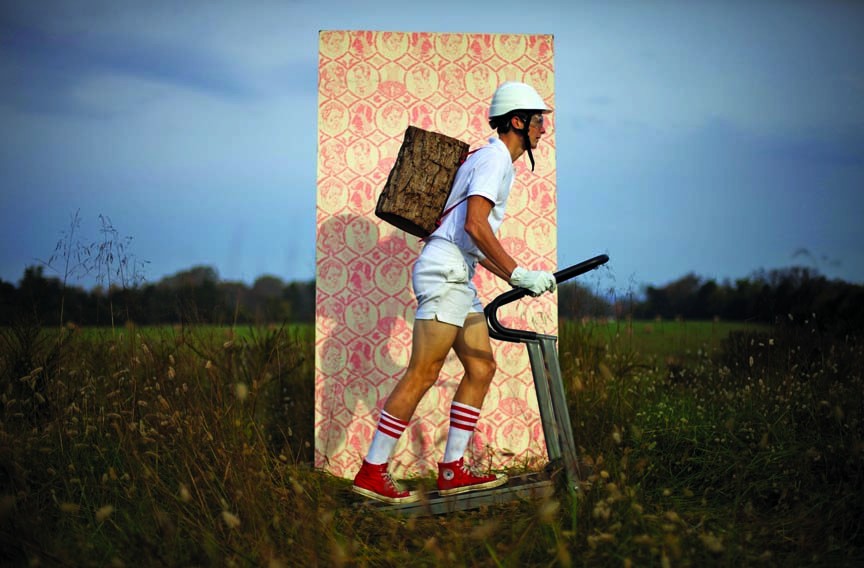 The objects so essential to the daily grind — a mug, a toothbrush — all seem futile in some great scheme. Until we imbue them with meaning. Avery Lawrence, a Charlottesville-born, New Orleans-based artist, makes a simple but strong case for the possibility of meaning in our routine lives. His multimedia exploration of memory, family narrative and society, relative to material form and physical activity, can be experienced fully via 1708 Gallery's exhibition: "Avery Lawrence Is Moving a Tree and Arranging Suitcases."

Lawrence pushes the bounds of multimedia art to include performance, film, music, collaboration, drawing, painting, installation, text, wallpaper and photography in one exhibition. The design and placement of each element are pristine. Lawrence brings a magazine stylist's extraordinary care to his work as a performance artist.

"Moving a Tree," one of the two distinct but related series, includes: a seven-minute film of the original performance, drawings and photographs of the artist in character, a saw used to destroy the tree, an actual log from the tree, and wallpaper designed using family icons. The material forms unite and ground the original performance piece, which was conceived to honor Lawrence's grandparents. That performance, the lasting footage and the periodic reconstruction for exhibition all prolong the event and reveal the deeply rooted meaning of the work. Lawrence's grandfather spent his last years suffering from Alzheimer's disease while his wife cared for him, shouldering the weight of their journey. The film begins with Lawrence dressed in a suit and tie to represent his grandfather. On a scorching day, he climbs a tree in the middle of a field and saws it to pieces with a handsaw. The sweat and physical gravity of destroying and then moving the tree across the field are apparent in Lawrence's every movement. Once the dismembered tree is relocated, the artist strips away the suit to reveal a white tennis outfit, representing his grandmother. He proceeds to reconstruct the tree using a hammer, nails and boards.

Though the movements and actions are simple, and though the whole process is arduous and seemingly futile — who saws a tree apart only to rebuild it again? — the underlying meaning is rich. Lawrence not only created the performance in homage to family history, but also relies mostly on his own memories of his grandparents during the performance itself. "I channel these memories as I begin each performance and get into each character," he says. "I am trying to find a balance between acting (embodying a different character) and performing as an artist and even performing as an athlete trying to overcome a difficult challenge."

Lawrence uses silent film physicality, theatrical props and contemporary art ideas to create a blend of lightness and depth in each performance. Somehow he manages to build bridges from his memory and movement to the viewer's own. It's oddly comforting to envision life as one big multimedia performance piece, with millions of individual artists. S