Me and My EV

Mayor Jones and I take the future for a test drive. 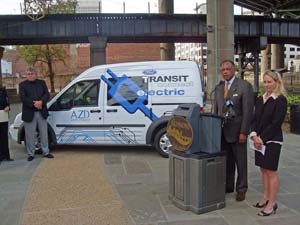 This is not a sexy van.

It's white and low-slung, with a big square rear. The all-gray, no-frills dash is not undulating or softly glowing or doing anything to impress me. There's not even a sun-visor mirror, for pete's sake.

Looks be damned. I want to drive it.

The mayor gets his chance first. He cruises up cautiously, pulls into the plaza across from Main Street Station, and emerges to much applause.

“I have a hot foot,” Mayor Dwight Jones says to the assembled reporters, businesspeople and city officials. “I was really concerned that it would be too slow for me. But I found out that it was not too slow for me.”

Jones delivers a few words on the city's forthcoming investment in electric vehicles, straining to be heard over the rumble of the highway overhead. The city will buy four EVs to start with, he says, and if the experiment works, will expand the fleet to 40 vehicles. A 240-volt charging station will be installed beneath City Hall.

Each electric car the city plans to purchase will cost around $40,000, Jones says. Conservation block grants and a $7,500 federal incentive will help the city pay for them, he says, and the city will also save money on fuel.

The electric vehicle we're looking at, which is not the same one the city plans to buy, is a joint venture of Ford Motor Co. and Azure Dynamics. Azure Dynamics, headquartered in Detroit, retrofits the standard Ford Transit Connect with a high-voltage battery pack that permits a driving range of 60 miles, or up to 80 in the city (braking helps recharge the battery). Its maximum speed is 75 miles per hour.

The Transit Connect Electric, unlike the bitty Nissan Leaf or the sleek Chevy Volt, is a working man's (or woman's) EV that's being marketed to businesses and governments. It'll be commercially available at Ford dealerships in April 2011.

I circle the van, waiting for the cameras to clear out.

Sure, says Jeff Hyatt, Azure's director of sales. As long as I don't crash, he adds. Hyatt hands me the notchless key, which is reminiscent of a steel Q-tip.

I creep out onto Main Street -- hey, this is new for me -- and head east. The van accelerates with a soft hum. The E/F gauge shows the battery charge. A large display tells me I have 60 miles' range remaining. Other than that, the Transit Connect feels no different than a Ford Focus.
Traffic thins as I take Route 5 east toward Rocketts Landing.

I give the gas pedal more of a love tap, taking it all the way up to 40. Nice pickup.

I'm heading out on the open road, just me and my EV, the emission-free wind blowing friskily behind us. I could just drive and drive …