Trump throws an arm around Virginia. 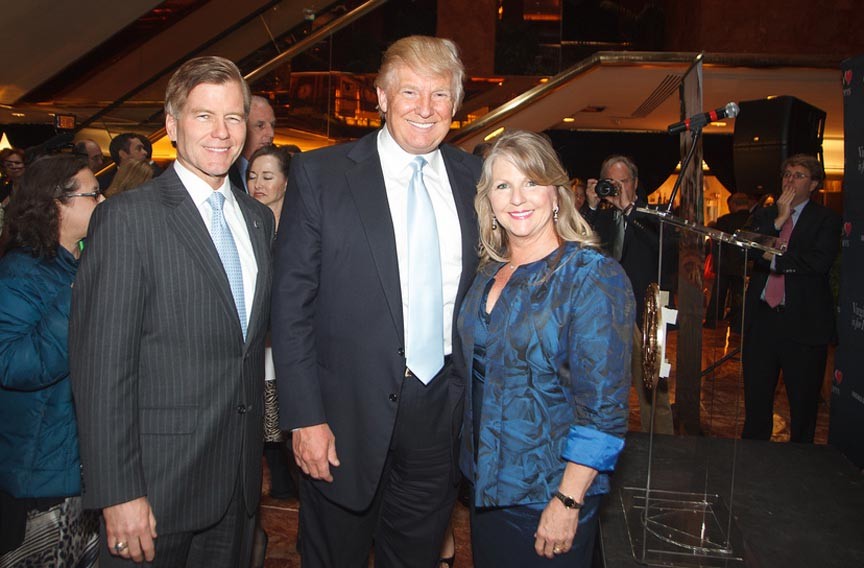 Donald Trump, for once, didn't have to do the hard sell. The good stuff spoke for itself.

At a reception in the Trump Tower on Fifth Avenue in New York City, wines flowed, oysters glistened on the shell and a celebration of all things glamorous in Virginia swirled around a pink granite lobby smelling faintly of ham. Some 200 guests -- filmmakers, producers and media types -- have gathered April 10 at the invitation of Gov. Bob McDonnell, to hear a pitch for their hearts and their business.

It's all part of an economic development tour -- next stop Montreal -- to keep the focus on Virginia's emerging star power and not so much on its politics.

Fine Virginia wines and foodstuffs; a reminder that Steven Spielberg shot there; a charismatic new (interim) tourism director, Rita McClenny; and a trifecta of Trumps put the steam into a two-hour lovefest that never strayed from decorous.

McDonnell and the first lady, showing more decolletage than usual, raise glasses of Kluge Blanc de Blanc to toast the jobs that come along with film, wine and tourism, and the commonwealth's desire to promote those industries around the world.

"We just shipped 7,000 bottles of wine to China," the governor says, "and if we can get them drunk enough maybe they'll forget the 13-trillion-dollar debt." (By the next morning, McDonnell was guesting on MSNBC's "Morning Joe," smiling and available in case a vice-presidential ticket invitation might be in the offing, as the journalists wondered.)

At the party's see-through podium, Trump deploys familiar phrases with his signature snarl and staccato timing. Maureen McDonnell "is a fantastic first lady"; the Commonwealth of Virginia "is just spectacular"; and Trump's holdings -- a golf club in Loudoun County and the Kluge vineyard near Charlottesville -- "are doing really, really well," he says. Trump's 28-year-old son, Eric, is charged with making sure that the Kluge vineyard, the largest vineyard east of the Mississippi, brings a proper return on investment. The Georgetown-educated Eric Trump flies in a few times a month to evaluate the business from an elaborate barn on the property. ("And I enjoy putting on some Carhartts," he says, improbably, of the farmer gear that's a million miles from the Italian leather of his shoes on this night.)

Standing at the back in a triple pearl necklace and grape-patterned suit, Patricia Kluge doesn't say much while she pours some of the best-regarded wines of her career. Guests might not notice the drama, but a poignant changing of the guard is in progress. In two weeks, Eric Trump plans to announce the first bottles on the Trump Winery label, and with that, the Kluge imprint will dissolve. While the once-wealthy Kluge is still involved in the business and the grapes may taste the same, the branding will be younger and bolder. Times change, and Virginia is ready to adapt, the pitch goes, and Eric Trump is a quite the polite, Virginia-loving exemplar. His brother, Donald Jr., mostly watches from the sidelines while the others shake hands and pose for pictures before being whisked away.

Elsewhere, along a sparkling array of bottles and fine stemware, winemaker Luca Paschina decants his prized Barboursville Octagon; heritage beef and country hams and tangy ribbons of salame and chunks of cheese promise excellence and deliver. Brie wrapped in watermelon, sea scallops on clouds of puree, petit verdot, and spiced, hand-painted chocolates all speak to the good life, the one that could get even better with higher sales.

With all the talk about local foods, it turns out that the biggest audience for Virginia's finest products isn't Virginians -- it's New Yorkers. The foods and wines on display at this party all have energetic sales reps in New York -- Olli Salumeria, King Family Vineyards, Edwards & Sons and an elite line-up of growers, taking their stuff to the best bars and kitchens and national magazines. Paschina visits chefs at the New York City restaurants carrying the Barboursville line, nudging along the relationships that are key to a higher profile, and works to put the product in the right hands and mouths.

Virginia is looking for love and opportunity in the land of plenty, and as McClenny urges the crowd, "Whatever it is that you do, you should do that in Virginia."