The McDonnell Trial: Just Between Friends 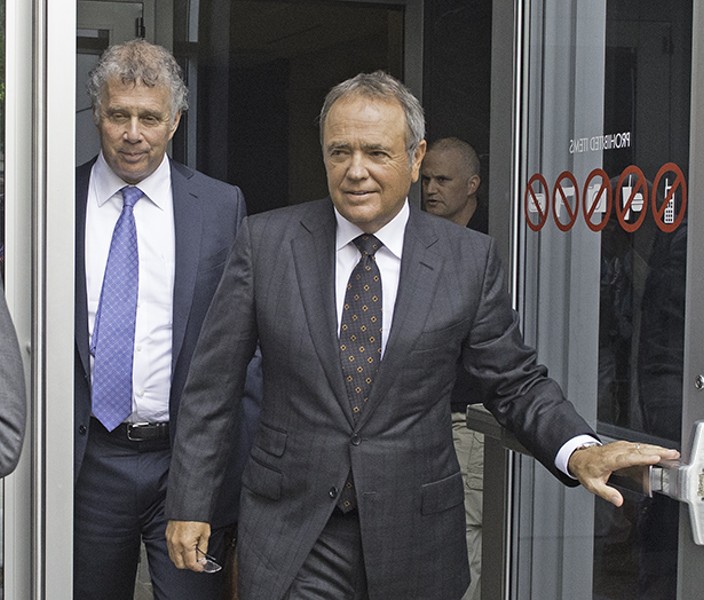 Businessman Jonnie Williams told a federal jury Thursday he was careful to conceal many of the favors he bestowed on former Gov. Bob McDonnell and his wife, Maureen, because he knew they were improper and perhaps illegal.

The McDonnells are charged with soliciting more than $160,000 in loans, gifts, golf outings and luxury vacations in exchange for promoting Williams’ diet supplement business.

They maintain they did nothing illegal, and their attorneys have argued that they couldn’t have engaged in a corruption scheme together because their marriage was breaking down and they were barely on speaking terms. Maureen McDonnell’s attorneys say she had a “crush” on Williams.

In an effort to rebut that defense, prosecutor Michael Dry asked Williams on Thursday if he and the first lady had a romantic relationship.

“No,” Williams replied. “I felt I had a business relationship with both of them.”

His aim, Williams said, was to buy the prestige and credibility of the governor’s office to advance the interests of his company. In particular, he wanted access to state officials who could bring about scientific studies of his tobacco-based diet supplement at Virginia’s state medical schools.

“Are you 100 percent sure that Bob McDonnell agreed to help your company because of the loans and gifts?” defense attorney William Burck asked Williams on cross-examination.

“I am 100 percent sure of it,” Williams replied. “I loaned the money and I got the meetings.”

Prosecutors introduced a tapestry of evidence on the trial’s fourth day illuminating the rarefied circles in which Williams moved – and which the McDonnells joined at his expense – from exotic sports cars to $5,000 bottles of cognac.

It was the day jurors got to see the engraved Rolex watch Williams bought for the governor at his wife’s request in 2011, for which Williams said he paid between $6,000 and $7,000 at a jewelry store in Malibu, Calif.

The watch was passed among the jurors, who examined it closely.

Williams said Maureen McDonnell noticed his watch during a private meeting at the governor’s mansion and said, “Jonnie, what kind of watch is that?”

When he told her it was a Rolex, she said, “I’d really like to get one of those for the governor,” he testified.

“I said, ‘Do you want me to get one of these watches for the governor?’ She said, ‘Yes, that would be nice.’ ”

Maureen McDonnell presented the watch to her husband as a Christmas gift.

“It was a bad decision on my part to buy that watch,” Williams said. “I shouldn’t have had to buy things like that to get the help that I needed.

Likewise, Williams said he regrets lending the McDonnells $120,000 to shore up their troubled investments in vacation rental properties in the Sandbridge area of Virginia Beach.

“I agreed to help them with money because they were helping me,” he testified – promoting his products at events in the governor’s mansion and around the country, and assisting his efforts to get clinical studies of his product.

He knows he may have violated the law, Williams said: “I thought the end justified the means. It was a bad mistake. I should have never written the checks.”

The former chief executive of a company once known as Star Scientific, Williams is testifying under a grant of immunity from prosecution.

In a private meeting with the governor, Williams said, the two discussed how Williams could bail the McDonnells out of their financial problems. A key issue for both, he said, was how to accomplish it without public disclosure.

They discussed the possibility of transferring some of Williams’ Star stock to the McDonnells so they could borrow against it. But he rejected that option, Williams said, because it would have required disclosure. In the end, he simply wrote checks to the McDonnells.

In his discussion with the governor in early 2012, Williams said, “I told him I’d like to keep it just between us with a handshake.” There was no loan paperwork.

“I didn’t want anyone to know that I was helping the governor financially with his problems while he was helping our company,” Williams said.

By May 2012, Williams had stroked two $50,000 checks. But the Sandbridge rental properties continued to hemorrhage money. In a text message to Williams that month, Bob McDonnell said he “would like to see if you could extend another 20K loan for this year.”

Williams’ reply text came within minutes: “Done, tell me who to make it out to and address. Will FedEx.” ____

Williams, 59, evaded a question about his net worth, finally conceding that it’s in the millions. He did acknowledge a taste for the finer things of life, such as luxury cars. He once owned a Rolls Royce, he said, but “I didn’t care for it.”

On a visit to Williams’ Goochland County home in July 2011, after Williams had agreed to let the McDonnell family use his vacation house at Smith Mountain Lake for a weekend getaway, Maureen McDonnell noticed his white Ferrari roadster.

“She said, ‘Do you have any of those cars at the lake house?’ ” Williams testified.

No, he replied, but he could have one sent over for the governor to drive.

“That would be nice,” she replied, according to Williams’ testimony. “We never get to do things like that.”

Williams had the Ferrari delivered to the lake house, with one caveat: “I asked her not to let the children drive it.”

There were other occasional limits to Williams’ generosity.

One evening in September 2011, he picked up the $1,500 tab for dinner for himself, the governor and first lady, and a friend at a Richmond restaurant. In the course of the meal, Williams said, Maureen McDonnell mentioned that her daughter Cailin needed a car.

Soon after that, Williams said, he got a phone call from Cailin McDonnell saying she had found a car and “my mother said you’re going to pay for it.”

That prompted a call from Williams to Maureen McDonnell. “I told her I just couldn’t buy a car,” he said.

Likewise, he declined a request from the first lady to sell her one of his Range Rovers at a discounted price for the McDonnells’ twin sons. “Too visible,” he said. ____

The jury saw videos of two appearances Williams and Maureen McDonnell made at gatherings of doctors in Michigan and California, pitching the health benefits of Anatabloc, Star’s diet supplement.

“He and my husband have been longtime friends,” Maureen McDonnell said of Williams at one of those events.

That wasn’t true, Williams acknowledged on the stand: At that point he had probably been in the governor’s presence no more than six times.

Nevertheless, prosecutor Dry asked Williams, “Were you glad she said that?”

“I wasn’t going to correct her,” he said.

By early 2012, Williams was becoming frustrated that his efforts to initiate clinical trials of Anatabloc at Virginia Commonwealth University and the University of Virginia weren’t making headway, even though he had passed out eight $25,000 checks to doctors at the two schools to prepare grant applications.

“We were caught in the bureaucracy of large institutions,” he said, particularly at U.Va.

He mentioned his frustration to Maureen McDonnell, who relayed it to her husband.

“She said he was furious that it was bogged down,” Williams said. “She said ‘The governor wants the contact information of the people that your people are dealing with at U.Va.’ ”

He provided the information, Williams said, but the studies never materialized. ____

By early 2013, law enforcement authorities had been tipped off about Williams’ relationship with the McDonnells. In January, Williams opened his front door to find investigators from the FBI and the Virginia State Police. He talked with them voluntarily in that first interview, with no lawyer present.

It soon became apparent to Williams that agents had interviewed the first lady, too, when a large box was delivered to his house. Inside were most of the designer clothes he had bought for her on a $20,000 shopping spree in New York in 2011.

Also in the box was a handwritten note from Maureen McDonnell expressing the hope that Williams’ daughter could use the clothes or, failing that, perhaps a charity could auction them off for a worthwhile cause, “like we talked about.”

The arrival of the box gave him a sinking feeling, Williams said.

“It was like, oh, no,” he said. “I sat down in a chair in the den and read this letter over and over. This letter was a fabrication.”

There was never any discussion with the first lady about disposing of the clothes, he said: “I felt sorry for her.”

He also felt a heightened sense of anxiety about his own future. Once he recovered from his shock at receiving the returned clothes, he reached for the phone and called his lawyer.

Bill Sizemore reports on politics for the Virginian-Pilot. bill.sizemore@pilotonline.com