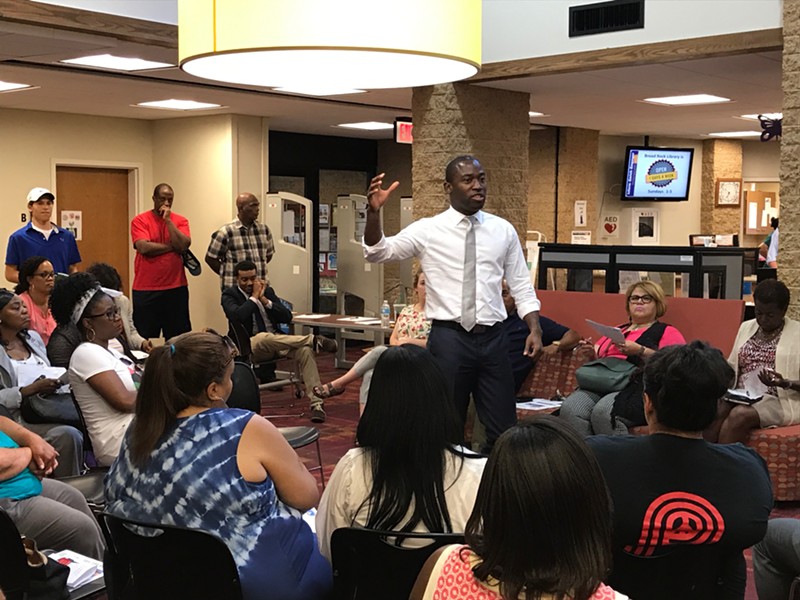 Mayor Levar Stoney wrapped up a summer round of district office hours — taking questions and concerns from his constituents on Tuesday at Broad Rock Library.

An hour became 90 minutes to two hours at most of them, as constituents listed concerns about infrastructure, education, public safety and a City Hall grab bag of miscellany.

"I already knew this because I was out on the campaign trail last year, but folks are passionate and they really care about what's going on right outside their front door," Stoney said afterward.

Fire and police representation was particularly strong. “Y’all see I brought the whole brass out,” Stoney said. “Tonight we’re here to listen." School Board members and council members were on hand to hear their constituents' concerns as well.

From the first meeting in the 1st District, a relatively subdued affair focused on infrastructure improvements, to Tuesday's 9th District one, which was heavy on concerns about the Richmond Public Schools, the meetings brought out a cross section of Richmonders.

The meeting in the 8th District, which is represented by Reva Trammell, was the largest and most lively, the mayor's team confirmed. "Thank you for coming to the show," Stoney said after it. "Eighth district live!"

The mayor's team fielded a lot of questions about changes coming to bulk trash and brush pickup. Is it set in stone? asked one resident of the 9th District.

"When I walked into the office of mayor, I was semishocked, but not surprised," he said about the public works and infrastructure issues. "We do some things well. And we don't do a lot of things well."

He explained the changes as a way to make the budget reflect the needs of alleys, sidewalks and trash collection.

On public safety, Durham collected some praise for his force's efforts, but he also fought back on some topics, urging residents to help his officers.

"You keep blaming police for everything," he told the 8th District. "We are doing the best we can."

People wanted more walk-throughs, bike-throughs and community policing. "All right, we’ll come by your crib," Stoney said to one woman.

On education, Stoney touted his compact, which has gone through a number of iterations and inspired some backlash from education advocates. But for the mayor it was a document to stave off dramatic budgetary showdowns of years past.


“We did not have that fight this year,” he told the 8th District. The education compact would keep it that way, Stoney said, as would teacher-salary increases in the budget.

"It's not fair for our children to be bused to another district and then forced into a classroom with 35 other children," she said.

Stoney suggested that the School Board needed to right-size the district and rezone for the first time in 30 years.


"We have a plan for Greene [Elementary School], If anyone knows anybody that has $20 million, we can start on it next month," said 9th District School Board member Linda Owen, suggesting they'd name it Altria Middle School if the right check came in.

Morris Smith, a coach with parks and recreation at Broad Rock and Hickory Hill facilities, was concerned about children between 15 and 18 being left behind by some city facilities.

"You’re saying 2020, but we can’t wait that long," he said. "I have too many kids leaving me, going down the street, getting shot, getting stabbed."

Smith was one of at least two city workers, both with parks and recreation, who came as audience members to urge more attention for the city's children. A Humphrey Caulder Community Center employee in the 1st District was concerned about sports programs and keeping talent in the Richmond Public Schools.


Stoney says he hopes to do another round of office hours during the budget season next year.