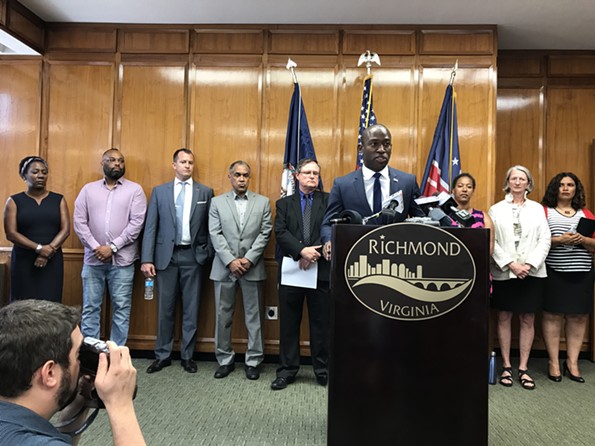 Mayor Levar Stoney announced the creation of a Monument Avenue Commission today "to help the city redefine the false narrative" of the Confederate statues that line the wide boulevard.

"The story is, at best, an incomplete story — equal parts myth and deception," he said.

Right now, removal or relocation appear to be off the table. The commission will focus on adding context and history to the Confederate monuments, correcting "the alternative facts" that the statues perpetuate: "Nostalgia masquerading as history," as Stoney put it. It will also research the possibility of adding more statues to the avenue.

At the Thursday news conference, Stoney quoted William Faulkner and spoke about the political history from the end of the Civil War through an era when the Confederate monuments were erected that saw a strong resurgence of white nationalist groups and the enactment of legislation that codified racial discrimination against black people and furthered racial oppression.

"The legacy of the long retreat from democracy that these monuments commemorate lingers in our city today," he said.

Stoney cited the statue of Arthur Ashe as the "only true champion" on Monument Avenue. "I wish these monuments had never been built, but whether we like it or not, they are part of our city," he said of the others.

"[The statues] constitute a default endorsement of a shameful period in our nation and in our city," he said. But pressed about whether the commission would consider relocation, Stoney said context was a "first step toward being truthful."

"Removing monuments doesn't change race relations in our city," Stoney said. "I'm just as insulted by those statues as anyone else. But what I'm most insulted by is that the statues currently stand up there without telling an ounce of truth."

Coleman committed to "open ears and open minds" during the process. "We hope you will join us in this endeavor in reasoned, civil and sincere conversation about how we build one Richmond," she said.


There will be two public meetings on the topic within 90 days. Dates, times and locations will be announced next week. A website has been created to accept input as well.

The commission will issue a report to the mayor on the topic in November.

Coleman said that if public input leans toward relocation of the statues, the commission will take that information to the mayor. She, too, emphasized adding context to the Confederate statues.

"I think there's a recognition that if you take them all down, it's not going to change the institution of slavery," Coleman said. "Nor the fact that this nation, North and South, built its wealth off the backs of 4 million people."

The commission will explore private funding for any new monuments or signs erected near the statues. Stoney said schools, public housing and other core services remain his priorities for the city.

The decision comes at a heated time. Charlottesville City Council voted this year to rename Robert E. Lee Park and remove a statue of the Confederate general. The decision sparked protests and lawsuits from local Confederate heritage groups.

White supremacist Richard Spencer led a tiki-torch-lit rally in support of the statue in May. And a Virginia Ku Klux Klan group is planning a similar protest July 8.

After white supremacist and Confederate flag aficionado Dylann Roof murdered nine black parishioners at a Charleston, South Carolina, church in 2015, many cities have contemplated or begun the process of removing Confederate flags and monuments to Confederate leaders.

At the news conference in City Hall today, a police officer stood guard nearby. He suggested that there was a concern about disruption from outside groups.

As a mayoral candidate last summer, Stoney expressed willingness to consider options for the Jefferson Davis monument in particular.

“Should there really be such a grandiose exhibition for him on Monument Avenue?” he said then. “That’s a discussion worth having. I know that for some people in the city, it is a tad bit offensive.”

Earlier this year, Style explored what it would mean to remove or add context to the monuments in "Is Monument Avenue Set in Stone?" (April 5, 2017).