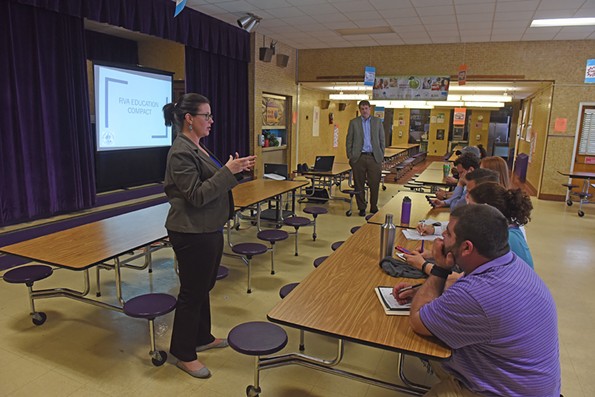 Mayor Levar Stoney’s office released a draft education compact resolution for the School Board on Friday.

The resolution is very different from the February document that kicked off a series of public meetings and culminated in a group of 10 organizations outlining concerns about the compact and asking for a delay.

Gone are the charts of academic goals and funding strategies. Gone is a breakdown of its focus on the whole child. The resolution boils down the compact to an initiation of quarterly joint meetings between City Council and School Board beginning in July.

An "Education Compact Team" of two members of each body, plus representatives from the mayor's office and schools administration, would also meet monthly and publicly. There's no reference to businesspeople or philanthropic representatives on the team, but "community stakeholders" would be chosen collaboratively.

The resolution is drafted only for the School Board right now, not the City Council, which is another body from which the mayor would seek approval.

But the release on Friday came with a corresponding readers’ guide that touched on many concerns expressed by education advocates at the June 7 press conference.

Will the Compact take away power from the School Board?
No. The RVA Compact Team will make policy recommendations on matters of shared concern, particularly funding. The decision to implement these policy recommendations will be subject to a majority vote by City Council and/or the School Board, as appropriate. In fact, the RVA Education Compact Team assures that Richmond Public Schools will have a seat at the table in critical discussions of funding issues.

It also returned to the "whole child" language, explaining the city's need to focus on poverty alleviation that affects student learning.

Some have noted that the Education Compact, a key campaign promise of Stoney's, has been a victim of poor timing. Its creation overlapped with the School Board's abrupt and unexplained firing of Superintendent Dana Bedden and a budgeting process that underscored a dysfunctional communication flow between council, the board and the mayor's office.

The Friday release also notes a special joint meeting of the City Council and School Board on Monday, June 26 at 3 p.m. at the Library of Virginia to discuss the draft resolution. It stresses that no official action on the resolution will be taken there.