It's honorable politicking in hard times. Mayor Dwight Jones explains the nuances of the 1st Precinct neighborhood team, which is part of the citywide Mayor's Participation and Communication Corps, at Woodville Elementary School.

Jones talks up the virtues of pothole repair, timely trash pickup and mending those broken windows that invite nefarious criminal activity. The teams allow “for more accountability from the city and from the residents,” he tells a handful of people in the Woodville library last week. “It's going to open the line of communication.”

The residents' groups represent one of Jones' most ambitious initiatives for a mayor who is nearly midway through his first term. Perhaps more significantly they indicate his governing philosophy: blocking and tackling, cleaning up neighborhoods, repaving streets and community policing.

The mayor has launched studies of North Boulevard and Shockoe Bottom, two of the city's most fertile grounds for development, but it's been slow going. Twenty-one months after taking office there are no concrete plans to build a new ballpark or develop Shockoe Bottom into a transportation hub. Construction has yet to start on any new schools. Consultants are still studying what to do with the Richmond Coliseum.

Meanwhile the city continues to trail the region in economic development, and Richmond's poverty rate leads the region — and the state — at 25.1 percent, according to the most recent census statistics. That means one of every four residents in Richmond lives below the poverty line. The news came like a crisp slap to the face in the Richmond Free Press' above-the-fold headline, “Capital of Poverty.” Richmond isn't just poorer than the suburbs, but worse off than cities such as Hopewell and Petersburg. 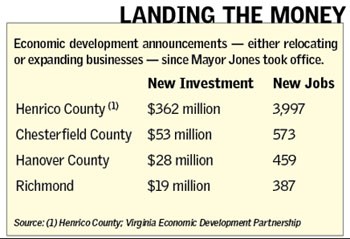 Since Jones has taken office, the surrounding counties have experienced considerably more economic development success than the city (see chart). And half of Richmond's numbers come from MeadWestvaco's arrival, which was announced more than three years ago, before Jones took office.

Or perhaps the mayor simply isn't that concerned with appeasing the growing legions who see City Hall as increasingly indifferent to economic duress. Tammy Hawley, the mayor's press secretary, says economic development is as much about jobs as it is about “poverty reduction.”

It's also about the little things, and that's where the neighborhood teams come in. During last week's public meeting, Jones seems content rattling off successful initiatives, such his plan to repave “25 percent of all the streets in the city over the next four years.

“You can look around and see that we're getting the job done.”