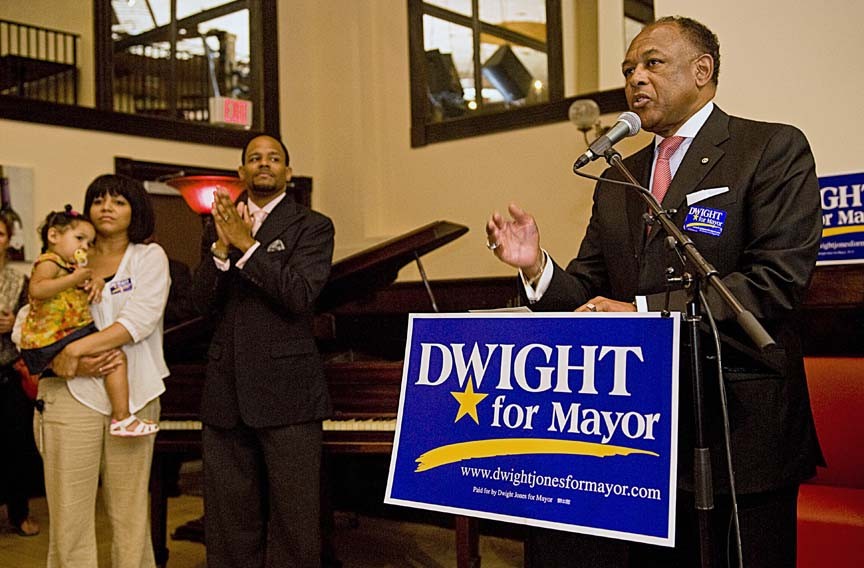 So what if Rick Tatnall dropped out of the race last week, leaving only former City Councilwoman Shirley Harvey to challenge him? Mayor Dwight Jones refuses to let a fireworks-free mayoral election ruin his fun.

There's only one spoiler June 7 at the Hippodrome, where Jones announces his re-election campaign: Richmond Free Press Publisher and Editor Ray Boone. His paper gets in front of the news with a story earlier that morning.

"He scooped my story today," Jones says, with a playful smile, after introducing Boone. "And so I really don't have anything to tell you that you didn't see in the Free Press today."

Just seven months ago Jones was reeling from fallout for mishandling the new City Jail construction contract and a variety of screw-ups at City Hall. A next-door neighbor to Jones, it was Boone who invited Occupy Richmond protestors to his front lawn in mid-November. His very public rift with the mayor caused considerable consternation at City Hall.

How quickly Jones turns foes to friends after a mediocre three and a half years in office illustrates his political skill. The mayor masterfully shifted the focus away from his administration earlier this year and onto the city's underperforming school system. It's time to "let go of the mediocrity," he said at his State of the City address in late January. He promptly rejected the School Board's budget, which it submitted to City Hall with a gaping $23.8 million hole, and spent the next few months hammering the School Board and its superintendent.

In the interim, foes have become converts. At the Hipp, they show up to lend support. Al Bowers, one of the spurned jail construction contractors, is here in a dashing white sport coat. Lawyer Bill Pantele, who ran against Jones for mayor last go-round, and was rumored to be considering another run, dons a Dwight Jones for Mayor sticker.

That there are no serious candidates stepping up to challenge Jones this fall has as much to do with the presidential election. President Barack Obama is expected to generate a strong turnout again, especially in a majority black city. City Councilman Bruce Tyler seriously weighed a run, but decided it was too much to take on Jones with Obama on the ballot.

Suddenly, mediocrity becomes invincibility. Richmond doesn't look so bad after all. A big international bike race is coming in 2015; the Washington Redskins are moving their training camp here. Such news makes it easy to forgo the harder decisions. One option to accommodate the Skins' three-week camp is to convert City Stadium into a practice facility, which means the city would keep an extremely valuable 16-acre site away from retailer developers and off the tax rolls.

After all, it's happy hour at the Hipp.