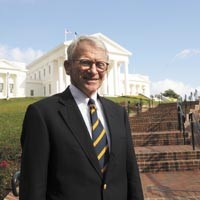 Joe Riley's perfect head of white hair, double-breasted coat and penny loafers suggest a grandfatherly fastidiousness -- but he only appears sweet and innocent.

As he rides up Broad Street into Church Hill shortly before speaking to an audience at the Greater Richmond Convention Center Nov. 19, the eight-term mayor of Charleston, S.C., has yet to see the river bend at the center of one of Richmond's more recent protracted conflicts.

Riley earned a national reputation by holding developers at bay and insisting on revitalizing the city by protecting Charleston's public treasures. The northern side of Richmond's riverbank in the East End, where developers plan to build the Echo Harbour condo towers, conflicts with the city's master plan, which calls for the property to remain open to the public, in the form of a park.

Cruising around town, Riley marvels at how many residential neighborhoods abut downtown: “There's so few cities in America that have that. The amount is just a national treasure!”He laments Kanawa Plaza at the bottom of Seventh Street: “They did not know what to do in the '60s. They had the urge to repair, to do something, but it wasn't founded in urbanism.”
He coos over the suspended footbridge to Belle Isle.

A fundamental principle that Riley and Flynn share is the idea that the best land must go to the public -- the philosophy fueling the city's Echo Harbour fight.

Riley tells a story about a particular developer who called him a “Hitler-like dictator” in the midst of their sparring only to toast him years later at a cocktail party where he told the gathering Riley reminded him of Winston Churchill.

The afternoon of his whirlwind visit to Richmond -- he flew in before noon and left by 7 p.m. -- Riley addressed nearly 500 of the city's movers and shakers on the virtues of putting public spaces at the top of the planning agenda.

He told the audience about a visit to a liquor store where the staff all wore pistols. He was there, he swears, to collect a “very modest purchase for a staff party,” when the gun-toting staffers gathered behind him at the register. Riley swallowed hard, but it was not an intervention on taxes, or a permit dispute or even a stick-up.

“These guys selling liquor, all wearing pistols, they wanted to talk to me about architecture,” he says. “Well, it's human.”