Looking for a quick way to learn how Richmond government works? Visitors to the city's Web site seeking greater understanding may be befuddled to notice that at least four different city organizational charts exist online, all illustrating varying — competing? — views of who's on top.

The “City Organization Chart” on Mayor Dwight C. Jones' section of the site puts the mayor on top, above even the seemingly broader entity of the “Executive Branch.” City Council is off to the right, properly placed under “Legislative Branch” but a full two rungs down from the mayor.

The chart is stamped “Fiscal Years 2007-2008,” apparently created during former Mayor Doug Wilder's term. Wilder famously redrafted the organizational chart after taking office in 2005, extending the mayoral bar at the top across the entire width of the page before a slight redesign. Perhaps symbolically, the competing charts helped set the stage for a rigorous legal battle over the powers of the mayor's office and City Council under the new city charter.

So when there's a new administration, there's a new organizational charting? So far not so, judging from a nearly identical chart that popped up in Mayor Jones' 352-page “Proposed Amendments to the Biennial Fiscal Plan: Fiscal Year 2011,” also available online. It appears that Jones bravely toes Wilder's line, with slight alphabetical changes.

Recently, City Council offered its own version of political charts — two of them. A chart titled “Government of Richmond, Virginia, U.S.A.” places “Richmond Citizen Voting Districts” at the top. Directly below and smack-dab in the middle is City Council, extending the thinnest sliver of a maroon arm over the mayor's office, to the left. A floating box proclaiming “Council-Mayor form of government” reinforces the hierarchy.

Another council-published chart titled “Richmond City Council Organizational Chart” seems to include only divisions within council, with the mayor's office cordoned off to the side, floating within a dotted line.

After learning there were several competing charts late last week, Council President Kathy Graziano says a meeting has been scheduled with the Jones administration to discuss the matter.

“I think this is a communication problem,” she says, dismissing the possibility that the various charts denote a larger disagreement over the power structure of city government. “We need to sit down and come up with one flow chart for the city that works for everybody,” she says.

See Flowchart B to determine your level of confusion ...

1.) An old chart from the Wilder administration still available on the current city mayor's website: 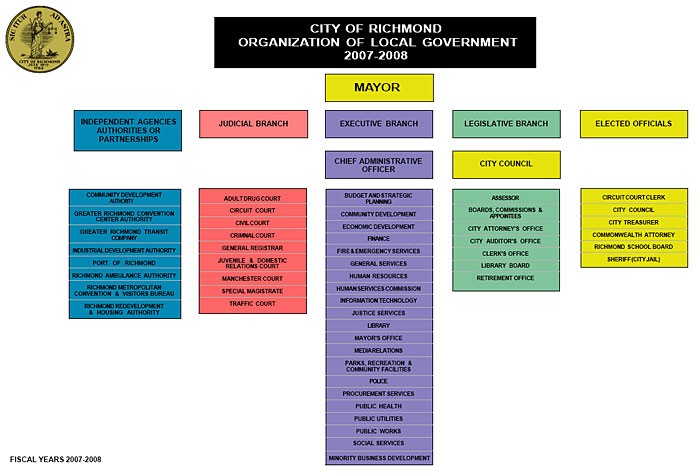 2.) A City Council-issued chart updated recently on the Council website: 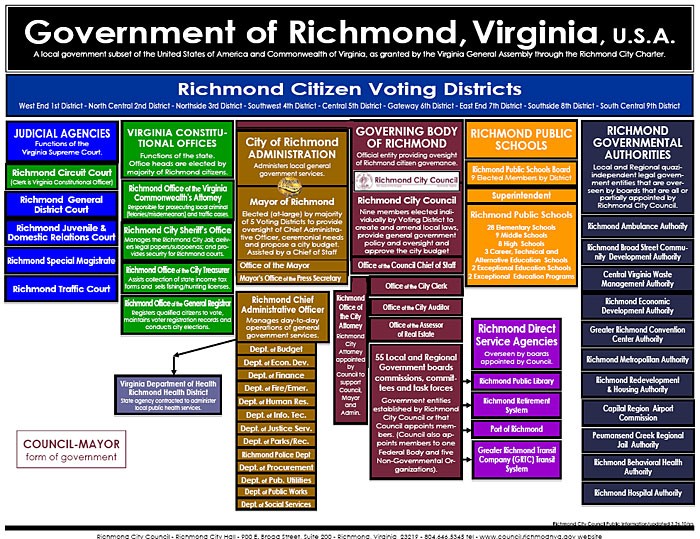 3.) Another City Council chart from 2009, still available on the Council website: 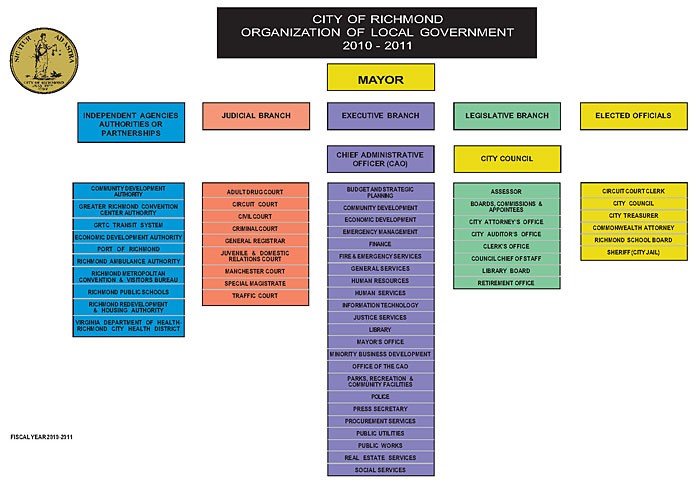