May the Farce Be with You

Good-natured “Fanboys” is a premise from another galaxy. 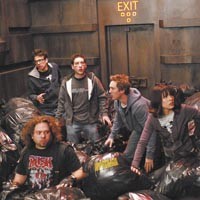 That groaning sound you hear is not necessarily a wookie. It is also the sounds of moviegoers responding to some of the leaden jokes in “Fanboys,” an affable but deflated lightsaber stab at “Star Wars” humor, featuring a group of Midwestern geeks who cross the country to sneak a peak at the upcoming “Star Wars” movie, “Episode I: The Phantom Menace.”

That's right, it's the late '90s, when “Fanboys” would have been a bit more timely. The boys in question — Linus (Christopher Marquette), Hutch (Dan Fogler) and Windows (Jay Baruchel) — still see the world through teenage eyes. These guys are obsessed with George Lucas' “Star Wars” universe even though they are much too old to be dressing up as characters from said films, debating nuances and counting down the days (about six months) until the release of the first prequel.

Upon the news that one of the three is dying of cancer — a plot device that feels a little heavy as the impetus for a road comedy — they convince a fourth buddy, stuffy car salesman Eric (Sam Huntington), to join them on a trip to break into Lucas' Skywalker Ranch in Marin County, Calif. Kristen Bell is the token geekette, Zoe, who, get this, has to fight her way into the guys' group.

Baruchel, playing his usual bespectacled leading man in nerd's clothing, and Fogler, doing his best Jack Black, are, like most of the cast, pleasantly appealing in their own right, but all must overcome the surprisingly low-rent script that struggles to create even the occasional comic spark. The main problem is that “Fanboys” only intends to make the lightest fun of its characters and their obsession. What it doesn't intend is to treat them in the least bit seriously, or develop them very much as individuals, at least not outside the amount required of a formulaic plot. Despite the attempt to give each character a distinct goal outside his or her “Star Wars” thing, they are practically interchangeable as the movie continuously strikes the one note of its central conceit.

Had it come out in 1998, “Fanboys” would have arrived on the heels of the real release of “The Phantom Menace” and all the buzz that surrounded it. A van whose horn sounds like Chewbacca might not necessarily have been more funny back then, but at least it would have been received with the goodwill of the time. “Fanboys” feels adrift a decade later, after the movies and the Lucas brand have lost some of their appeal — a fact slyly suggested by the movie in one of its rarer moments of clarity.

“Fanboys” ends up little more than a series of situational gags, varying from simple banter to chase sequences, all repeating the same refrain: show how crazy these guys are about “Star Wars.” As if that in itself is hilarious. In one scene Fogler's Hutch (coming dangerously close to ripping off “High Fidelity”) kicks a couple of kids out of Windows' comic-book store because they are fans of “Star Trek.” In another (a leitmotif of sorts) a couple of the guys argue over Luke and Leia's relationship. Funny not, it is (with apologies to Yoda).

A few cameos grind through some of the running time, but most hurt more than help. Only a couple of stars of the original “Star Wars” series show up, but the scenes are mostly intended as opportunities to show off. “Fanboys” is something of a brown-nose. So much you might suspect Lucas himself to make an appearance before the finale, though all we get is a face-off over the phone, related by a head guard (Danny McBride) at Skywalker Ranch.

Even in 1998 the average “Star Wars” fanatic — someone who might have seen one or more of the originals in theatrical release — would have been much older than the characters in “Fanboys,” whose sense of humor oddly enough seems intended for kids even younger. With a premise aimed at a limited number of older people and a sense of humor aimed at the young, the result is too often generic pandering that is unlikely to thrill either party. “Fanboys” doesn't cross over to the dark side, but the force is not with it. (PG-13) 90 min. HHIII S