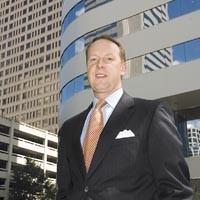 The concept of the citizen lawyer resonates with Matthew E. Cheek. The banking-law specialist at Williams Mullen takes seriously the “professional mandate to work in the community” that he says comes with becoming a lawyer.

To that end, Cheek, 38, chairman of the firm's financial services group, has worked with a slew of community organizations including the Boy Scouts, Junior Achievement and the English Speaking Union.

Ties to the union were forged early when the Pennsylvania native was picked to spend a year at Harrow, an elite British boarding school where Winston Churchill had once studied. “It was a great experience,” he says.

As the Virginia Bar Association's top young lawyer, he won a coveted award for boosting and refining more than 50 pro bono and community projects helping people with domestic violence problems, financial questions and disaster relief, among other issues. In 2007 he launched a diversity jobs fair to keep minority lawyers in state, which has become an annual event.

Cheek's day job can be a challenge as well. As an expert in real estate and other lending, he's seen his professional world turned on its head since the financial crisis hit. For the first eight years in the field, he says, “everyone worked together in a cooperative fashion” when he closed loans, which were 80 percent of his work. But during the past 18 months he's spent more time trying to work out troubled loans.

Cheek, who graduated from the University of North Carolina at Chapel Hill and the law school at Washington and Lee University, has been with Williams Mullen for 10 years.