Matter of Life and Death 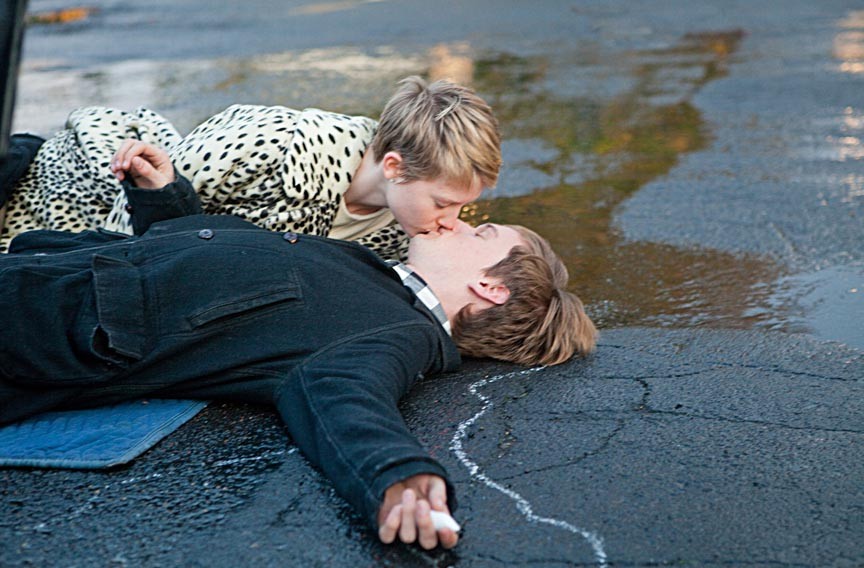 The young have an authenticity that has an intrinsic life-affirming value. That’s the most resonant message in “Restless,” one of three movies with cancer integral to the plot — including “50/50” and “Beginners” — I’ve seen in almost as many months. Of those “Restless,” directed by Gus Van Sant (“Milk,” “Elephant”) is by far the most noteworthy, an unusual, small-scale, sometimes problematic film about two teenagers dealing with cancer that succeeds where the others only gesture. It frankly depicts how younger people, ostensibly full of life, respond to the difficult fact of mortality. Most importantly, it’s not how we think they should.

The movie opens at a funeral, where we meet Enoch (Henry Hopper) and Annabel (Mia Wasikowska). Enoch doesn’t belong there — he doesn’t know anyone — he just likes to attend funerals. He gets dressed up in what looks like antique-shop mourning wear and attends other people’s funerals regularly. We don’t find out why until later in the film, but the obsession gets him into trouble at one service, where he’s rescued unexpectedly by Annabel, who’s become intrigued by his eccentricity.

Except for the unusual location it’s a fairly typical boy-meets-girl story. The difference is that, when Annabel tells her sister, Elizabeth (Schuyler Fisk), about it, we’ve just learned that she has some kind of terminal cancer. The scene is especially important because, although Annabel is shimmering with exuberance, her anticipation underscores her lack of a future, especially to Elizabeth, who understandably gets upset thinking about a little sister who doesn’t really have much of one.

And yet, however much we might have expected such a reaction, we’re surprised by the result. There’s no veil of grief hanging over “Restless,” as you find draped about the plot of more conventional-minded ancestors such as “Love Story.” At first this might seem odd, but the film reminds that grief is both a personal actuality and a construct, but nothing in between — although our media, especially popular film, loves to lay claim to universals.

Hardly a day passes that we aren’t reminded on television and Facebook how much we should mourn the passing of even the most obscure celebrity. When “Restless” encounters grief it’s usually through those who haven’t yet been ingrained with its artifices. The film’s emotional centerpiece is a scene in which Enoch and Annabel go on their first official date. It’s the kind of date you would have liked to have had as a teen, a casual fall afternoon watching a high-school sporting event outdoors, getting to know each other on the bleachers.

The catch is that Annabel has to reveal that she isn’t going to be around very much longer, which Wasikowska accomplishes with a heartbreaking combination of hesitancy and earnestness, delivered with something akin to generosity — it’s as if she were telling Enoch not that she were dying but moving away to Paris. Enoch’s reaction feels equally genuine. Instead of putting on compulsory displays of sadness, or avoiding the subject, he becomes pragmatic, listing important and fun things Annabel can do with the time she has left. Some may wonder where the film’s pulse is, but I think you can feel it every moment the two are together.

Other parts of “Restless” are less compelling. Enoch has a best friend that is (we hope) imaginary, a World War II-era ghost named Hiroshi (Ryo Kase). He and Annabel’s mom, a drunk, aren’t fully explored, seeming a little like extras from the indie-movie grab bag of quirk. The film’s makers suggest a collaboration of dissimilar sensibilities that might explain the lack of cohesion. It was produced by Bryce Dallas Howard, daughter of Ron, who co-produced with her father and Brian Grazer (Howard and Grazer of “A Beautiful Mind” and “The Da Vinci Code”). A brief history of the production would probably make a compelling read.

Even with its flaws, Van Sant’s film conveys a point of view worth considering, with solid portrayals from its up-and-coming young cast. Wasikowska is particularly brilliant. Other recent cancer movies have ended more happily, or have tried harder to find humor and silver linings, but “Restless” is the most unforced, the most willing to question and probe uncomfortable assumptions. In the midst of death, it is sincerely alive. (PG-13) 95 min. S