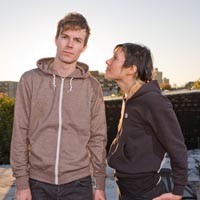 Three days into his tour, the ever-lively Matt Johnson says that he's “probably overdone it.” He and Kim Schifino not only have presented dance-crazed shows as the Brooklyn spunk-rock duo Matt and Kim, but also he confesses to experimenting with the point-of-purchase poison known as the 5-Hour energy shot.

“It was the grossest thing I'd ever drank in my life,” he says. “I've never done cocaine before, but I think that's what it probably feels like. I was really distracted.” Johnson agrees with my suggestion to seek corporate sponsorship with Red Bull, which is probably safer. And he bounces around a conversation, from talking about how weird it was to hear the duo's synth 'n' drums single “Daylight” in a crowded restaurant over breakfast to marveling that some people don't dream in color. But it's talking about its sophomore album that gets him really excited.

“A lot of people think that calling the album ‘Grand’ was some way of us saying like ... this is Matt and Kim's supercoolawesome album!” he says. “We didn't really think of that, but I'm good with it. Because I do think it's a super-cool-awesome album.”

When Johnson reveals that the disc is really just named after the street where he shares an apartment with Schifino, up pops an image of the duo coloring Shrinky Dinks while drinking Kool-Aid and eating butter cookies off of each other's fingers. They are that ridiculously cute together. Matt and Kim crank out high-octane songs — all percussive kicks, happy-go-lucky keys and singsong refrains — and somehow they avoid the cheese factor altogether. Brought to the stage, the tracks erupt into irresistible frenzies wherein the duo and their fans clap, climb things and sweat. … a lot.

The River City is the next-to-last stop on their tour. So can we expect a celebratory after-party to ensue?

“Well, a lot of times when we finish our shows we kinda hide in the back room,” Johnson says. “But sometimes we have our own mix of songs that we put on the PA system and have a predetermined song where we jump in the crowd and dance. Last tour it was Usher's ‘I Wanna Make Love in This Club.’”

“By the way,” he adds, returning to our earlier discussion, “it's pretty colorful in the Johnson dream. Technicolor. Full-on.”  S

Right at press time, we received word that Johnson had in fact “overdone it,” injuring his back during a show over the weekend. They've said they'll reschedule the Richmond show for summer. We'll let you know when they set a new date.