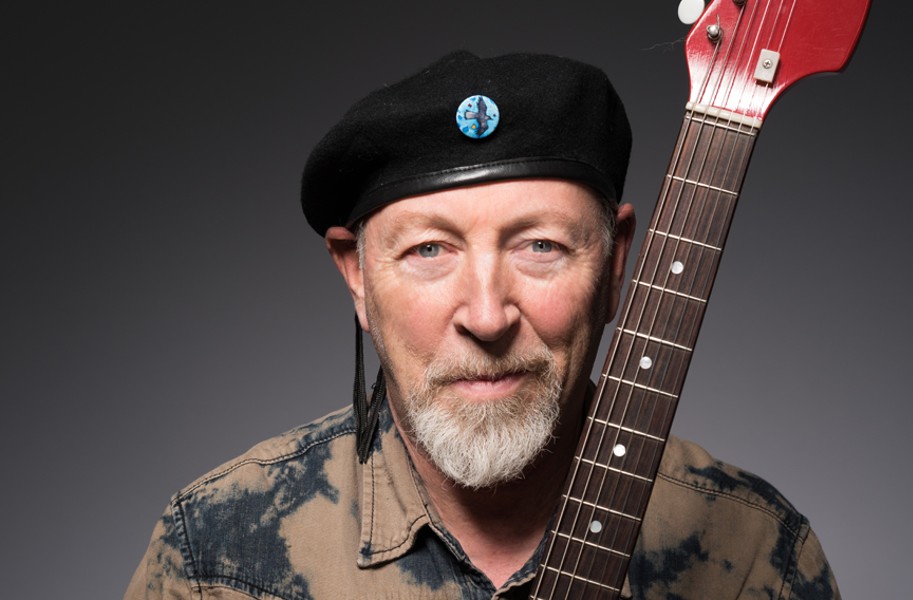 British guitarist Richard Thompson performs solo at the University of Richmond on Oct. 13.

Although hailed as one of the 20 best rock guitarists of all time, Richard Thompson isn’t quite as famous in the United States as countrymen Eric Clapton, Jimmy Page or Mark Knopfler.

It’s not from lack of talent. Maybe it’s his essential Britishness, more infused by English ballads and Irish reels as by the Delta blues. Perhaps it’s his range. His virtuosic acoustic playing is complex and multithreaded, his electric solos are alternately liquid and hard-edged, spinning out with epic logic. Maybe it’s that his songs, however lovely the melodies, most often are rooted in melancholy.

But with more than 40 albums as a leader, plus two multidisc box sets, he’s stayed popular enough to record prolifically and regularly. While he’s amassed more than sufficient beloved material to coast through a greatest-hits performance in front of delighted long-term fans, he continues to write new material. There’s the occasional backward glance, most recently the 2014 “Acoustic Classics” (Beeswing), a full-bore unplugged romp through his five-decade catalog.

Thompson was a founding member of British folk rock band Fairport Convention in 1967. In the post-hippie, Summer of Love era, the band was the English answer to such chart-topping psychedelic San Francisco groups as Jefferson Airplane. With elfin features and a huge mane of curly hair, the 18-year-old Thompson looked the part and enlivened the madrigal rendition of pastoral lyrics with cutting flashes of electric invention.

For the first five albums, including the definitive “Liege and Lief,” it was a brilliant mix. Fairport Convention’s rising career came to an abrupt and tragic disruption when its touring van crashed on the way home from a gig. The drummer and Thompson’s girlfriend died and everyone else was injured. The band, which is still active, was never the same. New players came and one-by-one the original players peeled off. In 1972, Thompson left too.

His first solo album, “Henry the Human Fly” (Fledg’ing Records), was an energetic, offbeat, mostly acoustic blend of eclectic, medieval instrumentation and brilliantly idiosyncratic guitar. It was his first recording with his duo partner for his next defining stage, Linda Peters, soon to be Linda Thompson.

Richard and Linda Thompson started in 1974 with one of the best albums of the era, “I Want to See the Bright Lights Tonight” (Hannibal). It ended in 1982 with another classic, “Shoot Out the Lights” (Hannibal), supported by a famously hellish tour giving fans front row seats to the furious disintegration of their marriage. Along the way the Thompsons wrote beautiful melodies and mournful lyrics — “Beat the Retreat,” “A Heart Needs a Home” — occasionally cut with a sunny dash of cynicism. The lovely, tender, modestly hopeful “Dimming of the Day” has become a standard, performed by people as varied as Bonnie Raitt, the Blind Boys of Alabama and Tom Jones.

The past 30 years have produced a string of distinctive solo albums. Thompson’s songs often are gritty short stories, his vocals adept and conversational, more distinguished by character than range. But as fine as his songs may be, the magic is in his guitar work. His live shows have a bracing, unpredictable edge, with multilayered melodies on acoustic guitar and vast, storming tangles of sinuous lines in his extended electric workouts. Thompson vociferously condemned the many bootlegs that are the downside of his improvisational variety.

His UR performance will be solo, trading the freedom to go on adventurous tangents for cathartic intimacy.

“Everyone in the room gets involved,” Thompson says. “Part of your job as a musician is to find things bubbling slightly below the surface. There is a lot more stillness, and a collective examination of ideas and emotions.” S

A Conversation with Richard Thompson

Style Weekly: On your latest recording (“Still” [Fantasy]) there is a song- “Guitar Heroes”- where you play convincingly in the styles of Django Reinhardt, Les Paul, James Burton, and Chuck Berry. So much of your music is infused with British folk. Who would be the guitar hero for that music?

Richard Thompson: There aren’t necessarily guitar precedents for that kind of thing. I suppose Davey Graham was blending in British and Irish music in what he did. Martin Carthy that same thing. They are acoustic guitar players who really kicked the door down. But mostly you have to take it from other instruments, from fiddle players and pipers and accordion players, because the guitar, until very recently hasn’t been seen as an instrument that belongs in British traditional music.

But in many ways, that is a good thing, and inspiring thing, because you have to invent a vocabulary, a technique to play that kind of music on a new instrument. It’s been a challenge. Various players, like the ones I mentioned, have found different ways to overcome the problems of trying to bend an instrument into an unnatural interpreter of that tradition.

It’s a different kind of blend. I suppose in the Appalachians a bit of blues got bent into it as well. There are different instruments, like the banjo. Players like Clarence Ashley would have a unique modal way of treating the banjo so it would fit those old Scots Irish tunes. Similar approach but a different tradition.

How much of your soloing is improvised?

It depends on the song. On some songs, a solo is almost part of the composition, so it is not going to vary that much from night to night. On others, it is wide open, and it can change drastically. One of the things that should keep you interested as a musician is that possibility of exploring and finding new things.

The electric stuff is easier to improvise because I have a band with me. I’m much freer to go off on a tangent and do anything. If I am playing solo, I have to hold down the chord structure and the rhythm and create a solo on top of that. Your solo scope is reduced. That can be harder. Not impossible but harder. Nothing is impossible.

How has Sufism shaped your music?

I think whatever you believe in absolutely shapes what you play. Music is a very spiritual thing. Sometimes even musicians had disastrous lives, Charlie Parker or John Coltrane, who were addicted to various things, but still, their music transcended. I think music is incredibly moving; it takes you somewhere else. It can take you out of your body.

So the answer is yes, yes and yes.

[In response to a comment about Hassan Hakmoun, who plays transfixing, spiritually-grounded music on the sintir, a three-stringed North African lute.]

When we think of complex music, we think of Shostakovich or something, which is harmonically complex. Folk music or roots music often have incredible complexity in a very simple scale. It is more about the inflection that you use, the grace notes and the little glides and things that lead up to the note. But if you ask a classical music to play like someone from North Africa on a three-string lute, they couldn’t do it. It would have to be very concisely written down so they could see it and reproduce it. Some of the classical composers like Franz Liszt would go out and write down folk tunes. It succeeded to an extent but not totally. The inflection is incredibly difficult unless you are brought up in that tradition.

The silences are important.

Why are your songs- even the upbeat ones- so often touched by anger, pain, melancholy?

I suppose as writers we can’t always help what creeps into the song. Sometimes you are writing a happy song, and it gets twisted. I think it is just who you are. Everybody who writes has a backstory. There are demons lurking, from your childhood or the grind of daily life, that impinge upon the writing process. Sometimes I don’t know where it comes from, where the mood comes from. How I started writing one thing and came up with something else. Often that is a kind of pleasant surprise, it’s good to be surprised by your own creativity. But you don’t necessarily have control over it. You can filter later on and say “I’ll sing this song, but I won’t sing that song because it is too dark and it scares me. But I’ll sing this happy one because it makes people more uplifted.” It’s just who we are as human beings.

But if you are truly reflecting things like love, it is a complicated thing. It’s not just “I love you” and flowers and happiness. There is a lot of tolerating each other in a loving relationship. Sometimes you can reflect that in a song. Human beings are a complex bunch. If that appears in a song, it is not a terrible thing.

Extremely important. And when we think of great art there are often contradictory emotions involved. That is the reason it is enjoyable. You can keep seeing new things in it because it affects the depth of human experience. Music has many functions. It may just act as dance music, in which case the lyrics become less important or even irrelevant in some cases. It’s fine to have a lyric that makes interesting sounds, as long as it has a good beat. I wish I could write more songs like that. I’d probably be richer.

And hopefully at the other end of the spectrum, there are songs you can listen to and they make you think and reflect and have an emotional response.

What should those coming to your University of Richmond performance expect?

This is a solo show.

When I play with a band, it is a whole other thing, although the repertoire overlaps. It is a more visceral experience. I get to play electric guitar. It’s louder. The bass drum pounds in your chest. All that stuff we expect from rock music. When I play solo, everyone in the room gets involved. There is a lot more stillness, and a collective examination of ideas and emotions. I think often there is a feeling in the room. I’m on stage, and the audience [is in their seats] but we all get involved in this kind of communication. For me, it is a wonderful feeling. Sometimes in a song, you are expressing ideas that aren’t on the surface, that are slightly below the consciousness of the audience. I think that can be very effective.

As a solo act, you are expressing things for people. Often something that isn’t quite spoken. Part of your job as a musician is to find things bubbling slightly below the surface and bring them out in the form of entertainment. It’s supposed to be a cathartic thing, and it has that effect sometimes. And I think on a good night people come away feeling rewarded and feeling like they have gone through an experience. And that they are better for it.