New touches on old Richmond landmarks show that beauty and utility are in the details. 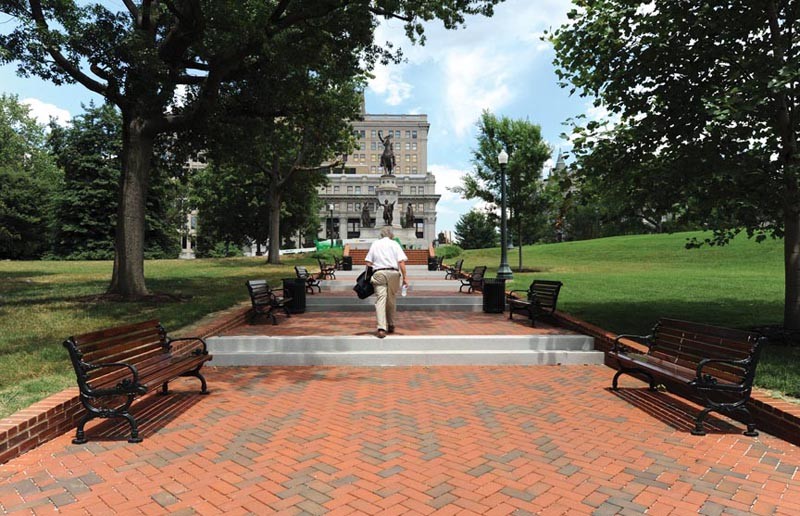 Armchair economists often determine a community’s fiscal health by counting the number of construction cranes that cast silhouettes against the sky. By this measure Richmond’s pulse has slowed. But some architecturally successful boutique projects are taking shape.

At three of our downtown’s most important historical and architectural landmarks — Capitol Square, Second Presbyterian Church and the Valentine Richmond History Center — some relatively modest-scaled, but intelligently-conceived projects have garnered big results. A reconstructed walk and stairway in Capitol Square; an environmentally sound playground at Second Presbyterian; and a completely new pocket park at the Valentine have made their respective environments more usable, attractively pleasurable and significantly eco-friendly.

Because the Jefferson-designed Capitol sits so squarely in the center of its greensward and the site slopes so dramatically toward Bank Street, it offers a variety of spacial standpoints. The treeless south slope, just below the building’s portico, is sun-bleached. The lineup of heroic statuary on the building’s north side, with shade trees and colorful flower beds, is more museumlike. The dense grove of trees on Capitol Square’s Ninth Street side — with its meandering brick pathway leading to the stolid Bell Tower — is most parklike.

But perhaps the most traveled — and arduous — stretch and space on the grounds is the long, axial walkway that connects the square’s 10th and Bank Street entrance with the equestrian George Washington monument. Infamously known as Heart-Attack Hill, to ascend it in the recent past was no pleasure. The descent was not much fun either, because of the poorly spaced and ill-sloped brick terraces and steps. In a just-completed renovation of the walkway (that’s so subtle few might notice) the steps and landings have been respaced and graded so that it’s a pleasure to walk in either direction. Broad slabs of granite have replaced the brick steps, establishing each terrace as a more visually distinct platform. When you stand at the bottom of the 29 steps, looking up the incline, the granite melds visually with the handsome granite base of the looming George Washington monument.

One enhancement isn’t so visible. The new terraces are designed to absorb rainwater. The water is filtered in underground cisterns and held for reuse in watering the Capitol grounds.

For 165 years, Second Presbyterian Church, on Fifth between Franklin and Main streets, has been a stoic presence. But it often goes unnoticed because it’s hemmed by a parking garage and a high-rise building. Even more obscure are the two intimate courtyards that flank the church’s nave on the north and south sides. At certain times, however, the north courtyard is difficult to ignore when it’s playtime at the church’s child-care center: The happy squeals and yells of the youngsters are infectious.

This spring the church completed a major redesign of the modest-sized play area and rechristened the space the Ruby Harvey Memorial Rain Garden in memory of the 4-year-old girl who attended preschool there and was murdered with her sister and parents in Woodland Heights in 2006.

The space has been divided into two distinct but visually related areas. The space closest to the city sidewalk and the distinctive 1840s Gothic cast-iron fence, is now paved in bluestone and serves as a passageway between the parking deck and church sanctuary. A low, slightly curving brick wall divides this space from the recreation area. The latter has been carpeted with a spongy and rubbery material that creates a forgiving play surface. In addition to fewer scraped knees, the material absorbs water with excess flow finding its way into garden plots.

Among those who worked on the project were Chris French of the Alliance for the Chesapeake Bay; Shepherd Land Planning and landscape design students from Virginia Tech.

What a difference five steps can make! Until recently a principal approach to the Valentine Richmond History Center was from North Tenth Street, past an unlovely parking lot and up a broad, ramplike walkway — uneventful to say the least. But after a transformative redesign, this modest space has been given a lift, literally. The ramp has been eliminated, the area raised and five bluestone steps added. Those arriving at the Valentine now experience an elevation shift from the parking area and enter a welcoming plaza — consider it an outdoor reception room. And what a lively space it is. The north wall of the room is the handsome portico of the Bransford-Cecil House (1840) with its five wooden pier columns. The brick wall on the east side of the terrace is hung with visually lively selections from the history center’s collection of electric and neon signs. The western side is the wall of the history center’s administrative building. And the terrace’s south side now frames views of nearby high-rises — including City Hall — that largely went unnoticed before. A ramp built to Americans with Disability Act standards is woven into the mix on the terrace’s western side.

But furnishings are also an important part of the mix here. Metal benches and low, brick retaining walls provide ample seating options. And an understated, elegant and low-slung waterfall adds a calming, cooling aspect to the space. Finally, a grove of trees offers shade in the warm months and additional color in autumn. Designed by landscape architect Waterstreet Studios, the terrace is named in honor of the Elmon and Pamela Gray family (their son Bruce is a history center trustee).

These intelligent and beautiful urban landscape projects are important and timely reminders that architecturally savvy cities are composed of not just masterworks, but well-detailed master strokes.