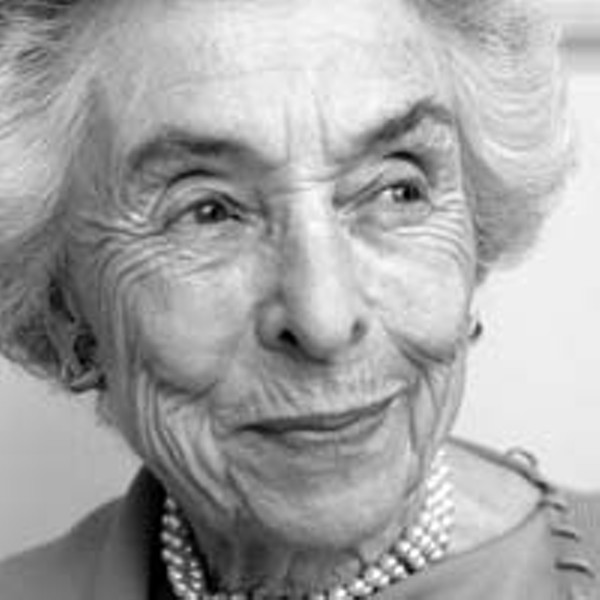 McClenahan died Jan. 16 in the comfort and grandeur of her Westmoreland home. She was 87.

Beloved by untold friends and acquaintances, and known as Richmond's eternal optimist and social advocate, McClenahan spoke with Style in November 2003 about her life's work and passions. She stitched a pattern, illustrating what it meant to be cultivated and progressive: to transcend the social mores of Richmond life in the '20s and '30s and to embrace women's expanding roles in the community. She had laced this, too, in a manuscript she wrote decades ago. With the help of her close friend Carter McDowell, it became the impetus of her first book, "Southern Civility: Recollections of My Early Life," published last year.

A cover photograph by Dementi of McClenahan at age 16 shows her as she has always appeared: as a woman in search of herself, her place in the world and her ability to affect the lives of others. McClenahan possessed what many in her position either forsake or naively think they can achieve: humility. She had a social conscience and listened to it; she had privilege and used it judiciously. Most of all, she held convictions that endured.

This is evidenced in how she willfully sank her heart and hands into the city.

Proof is everywhere. In her years spent as a civic leader, she left her mark on Richmond in her efforts to improve race relations, provide affordable housing and social services, preserve history and the arts, stimulate urban renewal, and advance higher education. She was the first woman to serve on the board of Richmond Renaissance. She founded the Richmond Urban Forum and, along with McDowell, the Better Housing Coalition. In 1990, Style named her Richmonder of the Year.

The eldest daughter of an accomplished pianist mother and Pulitizer Prize-winning father, McClenahan graduated from St. Catherine's School and Vassar College. In 1939, at 22, she married Leslie Cheek Jr., an architect who would become director of the Virginia Museum of Fine Arts. They had four children and were married until he died in 1992. A year later, she married Dr. John McClenahan, a radiologist from Philadelphia. They were married happily for more than a decade and began each day by reading to one another.

Veritably, McClenahan never met a stranger. She extended her hand to everyone, with heartfelt smiles and compliments. She did so with this reporter a little more than a year ago. Dressed stylishly in a brilliant cerulean sweater and black crepe skirt, she sat in the loggia at a glass table topped with purple poppies and pansies. Dozens of thick books were stacked neatly on a table behind her. The glass-enclosed room overlooked gardens glinting in orange and gold. It was quiet and serene. Occasionally and almost imperceptibly, a member of her staff would emerge then disappear. It seemed then as it does now — a stolen moment, one made precious by company and time.

Invariably, when asked about her accomplishments, McClenahan credited others — family, for instance, or any number of her treasured friends. "I'm the flimsy person in the middle," she would insist. "They are my wings."

But even an outsider quickly observed that her wings, her insight, were extensions of an incomparably independent and deliberate mind.

"My father's belief was that opportunity should be extended to everyone and dignity in government should provide it," she said of her father, historian and editor Douglas Southall Freeman. "Virginia has this inheritance like an underground river. We have the finest piece of real estate in the world. We should have the highest standards of government. And it's my belief that good government needs good people developing the laws."

Likewise, McClenahan was a stickler for propriety. By her definition, good manners were, simply, good citizenship — "concern for other people, being aware of their feelings," as she explained.

She had been thinking about her life, she said, in relationship to her calling as a person of faith. "What is the joy in baptismal living? Will you strive for justice and peace among all people and respect the dignity of every human being?" she asked, reading from a folded piece of paper. "I will, with God's help," she responded. She looked up above her reading glasses and exclaimed: "There you go!"

Not all of her efforts produced the kind of results she expected. Like Richmond Renaissance's push to build 6th Street Marketplace as symbolic of racial unity. Or her exhaustive attempts to get City Council and the state legislature actively engaged in the Richmond Urban Forum, a 15-year-long project she started to get blacks and whites to socialize. For a while it flourished, but in the end, she said, "nobody showed up." In a tangible sense, the forum failed. It dissolved because of lack of participation. But who knows how it may have had a subtler impact, having been before its time.

"I think it's very important to recognize it's a great mistake to keep something going that doesn't grow wings," she said.

Remarkably at 87, in the twilight of her life, McClenahan's wings seemed to expand and soar, perhaps above a confinement she emerged from as a young girl of privilege. Invoking her design, she recited a verse from Tennyson's "Ulysses." Her voice glided across syllables she'd long committed to heart: "The long day wanes; the slow moon climbs; the deep Moans round with many voices. Come, my friends. 'Tis not too late to seek a newer world." — Brandon Walters