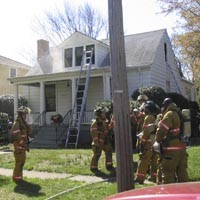 "He's our No. 1 offender, there's no question about that," says Capt. William M. Martin, deputy fire marshal for investigations.

Daniel got in trouble most recently when a house on North Side's Claremont Avenue caught fire April 6, causing about $50,000 in damages — including $16,000 for an environmental cleanup of lead paint chips that fell to the ground.

Daniel pleaded guilty to operating without a permit, and on July 6 received 12 months of suspended jail time and a $1,000 fine, $500 of which was suspended.

The practice of using a small torch to peel off accumulated layers of paint is common in the Fan and the city's older neighborhoods. The danger is that the heat often ignites wood within a wall or column without workers noticing, Lt. Keith Vida says. Then "they'll break for lunch and come back and the house will be on fire," he says.

A permit, which costs $40 per year, requires users to follow safety guidelines, including having a hose or fire extinguisher ready to go.

Still, "we prefer people not burn paint," Martin says. He knows they will anyway. Daniel is one of a few contractors who specialize in the practice, Martin says. He does it cheap, making him popular among Fan homeowners.

Style was unable by press time to reach Daniel, whose number is unlisted.

To Daniel's credit, Martin adds, "for the amount of houses that he does, he had a very low incidence of burning them." Nevertheless, he wants the Claremont house to be the last. S