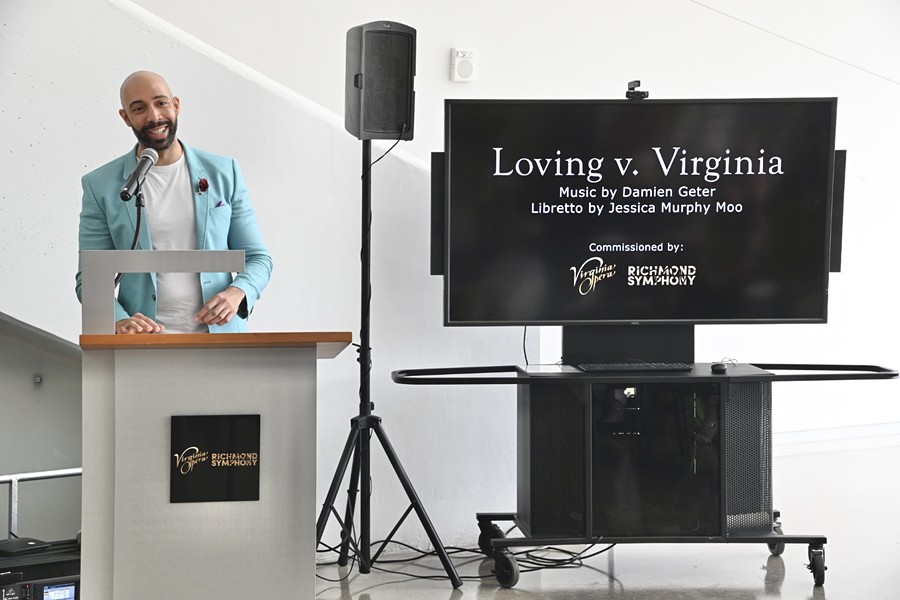 Scott Elmquist Composer Damien Geter, a Chesterfield native who now lives in Portland, will be writing the music for the "Loving v.Virginia" opera.

Virginia Opera and Richmond Symphony announced on Monday that they would co-commission a new opera based on Loving v. Virginia, the landmark U.S. Supreme Court case that legalized interracial marriage.

"I can't think of a more fitting story," says Adam Turner, Virginia Opera's artistic director, of the proposed "Loving v. Virginia." "It's a testament of love, a story of quiet persistence, courage and ultimately a victory for civil rights and the freedom to marry in the entire nation."

Turner told the crowd of supporters and media assembled at The Institute For Contemporary Art at VCU that commissioning an original work about a Virginia topic -- "something very important to the history of the state" -- was top-of-mind when planners thought about how to mark the 50th anniversary of the company, slated for 2025. "And if we could get a Virginia composer, even better. And I'm happy to say we have both of those today."

Composer Damien Geter, a Chesterfield native who now lives in Portland, will join with librettist Jessica Murphy Moo to tell in song and verse the story of Mildred and Richard Loving, the interracial Virginia couple sentenced to prison for being married. The Lovings' successful legal battle to change Virginia's Racial Integrity Act later became a precedent that eventually led to the legalization of same-sex marriage. The Lovings have been celebrated in song, had their story made into several feature films (including 2016's acclaimed "Loving" by Jeff Nichols) and can even claim a day (June 14th, Loving Day) of their very own.

Geter, a prolific 42-year-old composer, singer, conductor and actor, did his undergraduate work at Old Dominion University, where he first encountered opera through Virginia Opera. He acknowledges the hugeness of the project. "This is a story that is very important, not only to Virginia but the nation and, quite frankly, the world." He shows off his virtuosity this weekend, singing bass-baritone with the RSO in a Carpenter Theatre program that includes Beethoven's Ninth Symphony.

Initial funding for "Loving v. Virginia" has been provided by an OPERA America’s 2022 Repertoire Development Grant, designed to foster new works, but additional money is being sought, including some unusual fund-raising measures. At the press conference, it was announced that the ICA will serve as the meeting place for paid workshops that will help to support the new opera. Donors can join a "Commissioning Club," that offers special access to workshops, the creators and the cast. Benefits can be purchased in three tiers ranging from $15,000 to $45,000.

With this club, the audience will be invited to participate in the opera as it develops over three years, says Peggy Kriha Dye, Virginia Opera's general director and CEO. "The first year is really for the composer and librettist to learn each other's artistic language and start to create the story, much like a screenplay for a film. There are bits and pieces as we go....the words will have a workshop so that the story is how everybody wants it to be."

This kind of public involvement is somewhat rare, says Lacey Huszcza, the Richmond Symphony's executive director. "But it's not unheard of. It happens in different places in different ways. I've never heard of one around opera commissioning, not like this, where you don't just sponsor a creation but you follow the journey and get connected to the work and experience it in a way nobody else does."

"The club is a great way to involve people," echoes Valentina Peleggi, the Richmond Symphony's music director, who is thrilled that longtime collaborators the Symphony and the Opera are co-commissioning a new work for the first time. "And on such an important topic."

But is composer Geter ready to hear feedback from symphony and opera donors for three years? "If it's going to be something to help the process and help to get opera out in the world and help forward the art form, I'm all about it," he says.

What if they tell you there are too many notes, and to cut a few?

"That's too bad," he laughs. "Then they can write their own opera." 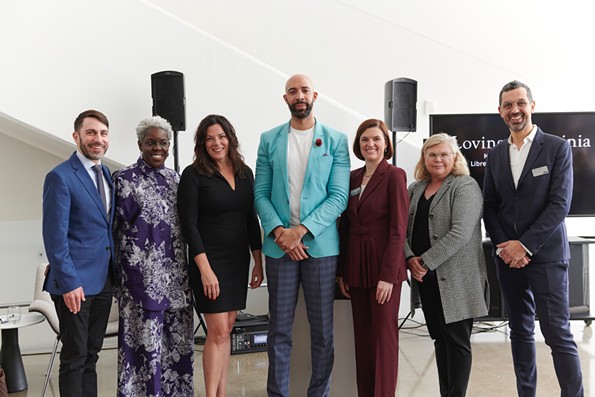