A new movie theater emerges from the masochistic task of renovating an old warehouse. 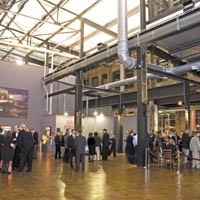 For such a billboard-lined, underwhelming thoroughfare, the stretch of the Boulevard running from West Broad Street to Robin Hood Road once delivered in spades the entertainment goods to generations of Richmonders.

Who remembers the Arena, where concerts, college basketball and Arthur Ashe and his generation of tennis greats once dazzled audiences? A more recent memory is minor-league baseball games at The Diamond — and at Parker Field before that. And for decades the annual National Tobacco Festival Parade was a mainstay of local pop culture and a transcendent rite of autumn: Spectators lined up six deep along the curb, eagerly applauding the procession of shimmering floats, blasting bands and colorful convertibles carrying princesses from the tobacco-producing burgs of Southside Virginia.

With the much-anticipated opening of Movieland at Boulevard Square, on the northeast corner of Boulevard and West Leigh Street, the amiable father-and-son developer and impresario team of Charles and Ben Moss counts on delivering entertainment daily. Times Square-based Bow Tie Cinemas — the Moss men sport them regularly — has configured 17 new theaters under one roof along with 800 parking spaces.

The big surprise, beyond this being Richmond's first new movie complex in 30 years, is that Movieland sits within a nondescript, brick industrial building. In the late 19th century a steel factory for producing train components was housed here, and more recently Brooks Transfer & Storage. Just east on West Leigh, similarly dramatic transformations have occurred. The Todd's Ham and Southern Stove Works buildings were converted into apartments and Maggie Walker High School found new life as a regional governor's school. Like Movieland, these redevelopments each took advantage of generous preservation tax credits.

But who knew a storage warehouse could become an entertainment destination? The existing structure is a low-slung, oblong, two-story brick structure that hugs the sidewalk along Boulevard and appears to burrow into a hillside. The old brick had been cleaned or painted, although the ghosts of old painted signs were preserved. The phalanx of windows along the Boulevard, which once helped ventilate work spaces, has been sealed in gray cinderblocks. These blind windows aren't exactly pretty, but that's the point — the former factory is a piece of industrial archeology and with the intelligent, no-frills renovation of this structure, it's clear what's old and what's not.

What's important is that the old building has been preserved and gets another chance. This isn't always a given. Much of our nation's industrial architecture of the past is fast disappearing. One of the thrills of traveling by train to the northeast was gliding through the New Jersey Rust Belt past mostly empty factories of heroic proportions. These were as evocative as the sight of ancient aqueducts as one approaches the Rome train station. Whether outside Newark or the Eternal City, these structures spoke to respective cultures and technologies.

While many American brown fields have been demolished in recent years, in Richmond, Movieland can take its place along with the buildings of Tobacco Row and Rocketts Landing, or even Virginia Commonwealth University's Cary Street gymnasium, as an unlikely industrial or commercial structure repowered for new assignments.

But hey, all you really want at the movies is a smooth entrance and exit strategy, comfortable seats, a lap-full of snacks and a good flick. Right?

Working with the Richmond firm of Commonwealth Architects, Bow Tie has created an interior reception area that delivers an initial wow factor and then compresses as you walk to any of the 17 theaters. Entering the open, three-story lobby is akin to experiencing a modest-sized airport. Its central space soars to a number of clerestory windows.

It's also here that the overall color scheme becomes apparent. Dark gray and red are used consistently throughout the building, along with black accents. These are basically tough colors and aren't intended to sugarcoat or prettify the old building's industrial DNA.

From the lobby, moviegoers reach theaters by following two concourses. The largest theater, at 300 seats, is at the northernmost end of the structure and is all-new construction. In the smaller theaters, in the original building, exposed brick walls are apparent, but hung with acoustical panels to balance the sound. The seats are on the upright side and exceedingly firm. Wall-to-wall carpet is woven with a bow-tie pattern.

The only giddy design touches are found on the exterior. These include the Movieland signs, which suggest a traditional marquee with running lights. While they bespeak low-tech glitz, they do provide an energy jolt for those arriving patrons.

With the completion of this theater, the Boulevard takes another step in making this part of town an entertainment destination. With such popular nearby eateries as Stronghill, Buzz & Ned's and Bill's Barbecue — and the prospect of baseball returning to The Diamond, via the VCU team, for at least a few more years, there's still hope for a renaissance along the recently landscaped Boulevard.

Now, if we can just do something about those billboards. S