“It was a brilliantly clear morning,” Sen. Mark Warner of his inauguration on the Capitol front steps.

“The legislature had turned Republican,” he says. So in his inaugural speech, “in a ‘high-drama' moment I wanted to extend the hand of friendship to [State Sen.] John Chichester and [Speaker of the House of Delegates] Vance Wilkins.” But at that moment of hands across the aisle, Warner says, it struck him: “What if they don't accept my gesture? But they were gracious. But I remember it seemed like such a much better idea in practice than in reality.”

Warner says he's glad that most aspects of his inauguration were photographed because “inaugural week is a blur. Thank goodness for the pictures, it was only afterwards that I could enjoy it.” 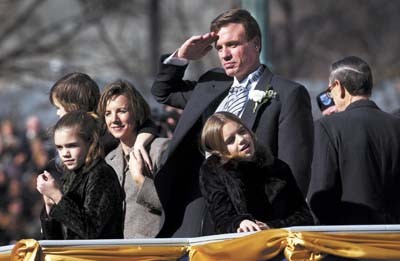 Gov. Mark Warner, with his wife, Lisa Collis, and their three daughters, salutes a passing unit during the inaugural parade in 2002.

He's examined photographs of his salutes at various times during his inauguration, especially those involving reviewing the entire corps of cadets from Virginia Military Institute and the moment he was presented the canon shells which had been fired in a 19-gun, building-rattling, pigeon-fluttering salute. “I had never been in the military and wondered if my salute was appropriate,” he says. “I think it passed muster. It wasn't necessarily smart, but it wasn't slack either.”

What he remembers vividly, however, is when he first entered the mansion with his wife, Lisa Collis, and their three daughters. “All the staff was lined up,” he says. “It was like walking into a PBS miniseries — a ‘Masterpiece Theater' kind of moment. It dawned on me, I'm going to live here.”

Warner suggests inaugural balls may not be his thing. “I'd been to a few inaugural balls in Washington for presidential inaugurations and they were awful, crowded cattle shows. We had one main ball and I had to stand in a roped-off area. It was an ‘in-the-zoo' feeling. But I enjoyed dancing with Lisa.”

A public reception the following day was more to his liking: “You open the mansion and people line up to come through. You're exhausted, there is family from everywhere and you're running on adrenalin. But it is the public, especially from central Virginia, just saying: ‘Welcome to our community.' It's a really good feeling.”

“But the cruel and unusual punishment of the whole thing,” he continues — “and Gov. Allen pointed this out to me — is that you work so hard on your inaugural speech and then a few days later have to deliver a major address to the joint session of the legislature. There's no more important policy speech.”