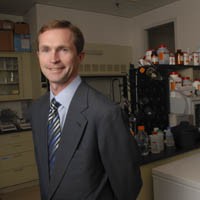 Back when Motorola Inc. was promising to turn Richmond into a hub for computer chips and digital technology, few gave much attention to the state's burgeoning biotechnology scene. While the chips failed to fall as planned -- Motorola never built the plant in Goochland County — biotechnology arguably became the state's most important industry.

Mark Herzog could see it all unfolding years ago while working at the Greater Richmond Chamber. He began to push for educational seminars on globalization, co-founded the World Affairs Council, and prodded lawmakers and business leaders to turn the state into something of an incubator for technology and life sciences.

As executive director of the Virginia Biotech Association, Herzog, who says his greatest skill is "bringing people together," spends his time chasing government grants and working the halls of the statehouse. Earlier this year, he helped secure a $1.5 million workforce grant to help fill a growing need for skilled technology workers and was recently named chairman of the Council of State Bioscience Associations. He's not high-profile, but Herzog plays an important role nurturing an increasingly important industry (see Philip Morris Research Center on Leigh Street).