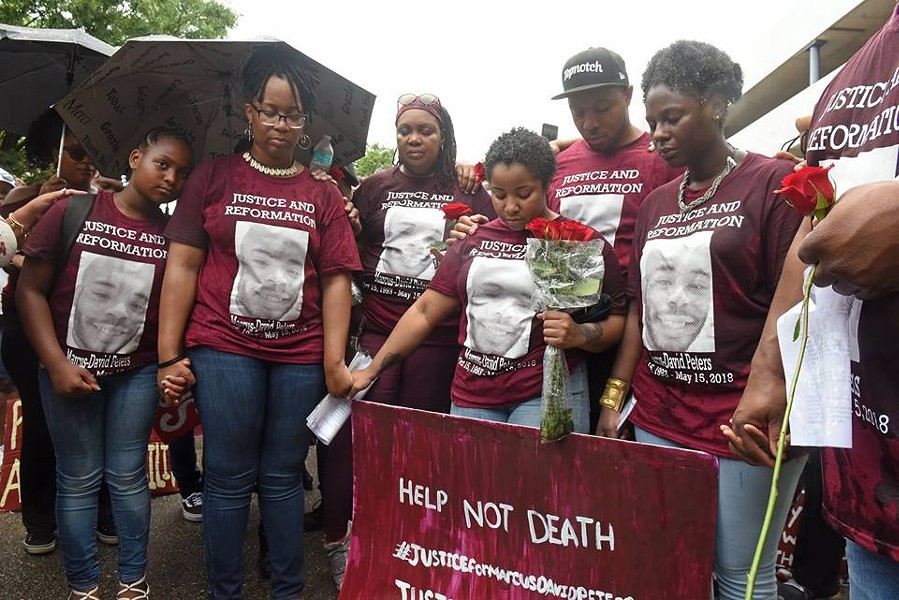 Scott Elmquist Family members of Marcus-David Peters gather Saturday at the March for Justice and Reformation.
Taylor Davis didn’t know the man fatally shot by police last month, but is looking for answers about his death from his alma mater, Virginia Commonwealth University.

“VCU can no longer improve or save Marcus-David Peters’ life,” Davis says, “but they can still make his death meaningful.”

Tanveer notes Peters’ work as a resident assistant and his status as an honor student — “all these things built up what an asset he was to the community.”

Which begs the question why VCU has kept silent, say Davis and Tanveer, who refer to themselves as student community organizers.

Peters, a 24-year-old biology teacher at Essex High School, died from two gunshot wounds to his abdomen May 14. Following a visit to the Jefferson Hotel, where he worked part-time as a security guard, Peters was found naked near interstates 95 and 64, where he danced and rolled in the street and ultimately charged at Richmond Police officer Michael Nyantakyi.

The officer attempted to subdue Peters with a stun gun, which apparently did not discharge correctly. The footage from Nyantakyi’s body camera, which has been released to the public, reveals that the officer shot Peters at close range within about 18 seconds of approaching him.

Peters died in the hospital that night.

Davis and Tanveer spoke during the March for Justice and Reformation for Peters on Saturday, which started at the Stuart C. Siegel Center and continued to the Richmond Police station on West Grace Street. The two students drafted a letter for VCU administrators, which they intend to deliver Monday.

“First we would like VCU to release a statement acknowledging the loss of Marcus-David Peters, a valuable member of the VCU and Richmond communities,” Tanveer says. “This must include specific outreach to the family who is strong enough to attempt to create change in the community after such a strong and significant trauma.”

Second, the students want VCU’s administrators to release a statement with a “critical stance on the use of force that killed Marcus-David Peters.”

“We are asking that the first statement be released within one week of receiving the letter,” Tanveer says. “Additionally we are allowing for 18 days from the initial receipt of this letter for the release of the stance critical on the use of force. We are generally selecting 18 days when it only took 18 seconds to make a decision that ultimately ended the life of Marcus-David Peters.”

Undeterred by the afternoon rain, Tanveer and Davis stick around outside the police station following the march. After Peters’ sister Princess Blanding and community organizers speak and the crowd begins to disperse, the two students circulate with clipboards, asking attendees to sign and sponsor their letter.

They also take a moment to speculate on how different the university’s response may have been had the shooting taken place before students left for the summer.

“I think there probably would have been a campus protest,” Tanveer says. “I think maybe they might have actually found it important enough to release a statement. I think they’re skating by on the fact that there aren’t enough students on campus that they think are going to care.”

Tanveer notes that VCU Residential Life and Housing, where Peters was employed as a residential assistant for two academic years, posted a statement on its Facebook page May 22: “Our continued thoughts for family members and friends who are mourning the loss of VCU alumnus Marcus-David Peters.” It goes on to describe Peters as “well-known and respected as a student leader in the VCU community,” and that “he will be missed not only our department but by many within the VCU community.”

VCU administrators have not responded to a request for comment.

Students aren’t the only ones with demands.

Blanding notes that when Durham released the officer’s body camera footage to the public May 25, he told a roomful of reporters that his officers receive 40 hours of mental health training. During that press conference he also said that he would hold a community meeting once the investigation concludes and the commonwealth’s attorney determines whether the officer’s use of force was justified.

But Blanding and her family want the opportunity to discuss the department’s policies sooner, and she says they’ve given Durham 24 days to respond to the demands and hold a meeting.

“We need to talk about policy and procedures. This cannot continue to be the norm,” Blanding says. Durham “complained that his people did not have enough time, enough training, 40 hours is not enough. It’s very clear, he’s admitting that they’re not the people to address the crisis of a mental health situation.”