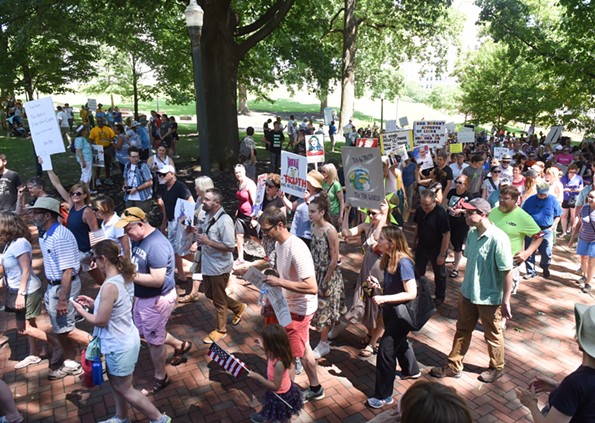 Around 300 people rallied on and marched from Capitol Square grounds on Saturday, calling for an independent, transparent investigation into the Trump administration’s ties to Russia.

“I cannot believe that, in this moment, we actually need to march for truth,” Corinna Barrett Lain, a University of Richmond constitutional law professor, told the crowd. “Like that’s a controversial thing. … March for Truth — that’s like marching for puppy dogs.”

The event, organized by Henrico County-based Indivisible Richmond, was one of many across the country scheduled today. Leaders of Indivisible Richmond cited the firing of former FBI director James Comey by President Donald Trump as a motivating factor.

“What is the truth behind a president, a commander in chief, who can’t even acknowledge an attack on our sovereignty?” said U.S. Rep. Donald McEachin, who represents the 4th district.

He commended Sen. Mark Warner’s work on the matter in the Senate Intelligence Committee.  “I’m embarrassed to tell y’all this, because I’m a proud member of the House of Representatives, but all the adults are over in the Senate,” McEachin said. He urged attendees to continue contacting their elected officials.

Also speaking was Caroline Orr, a doctoral student at Virginia Commonwealth University, who writes under the twitter handle @RVAwonk. Her online presence has garnered the attention of former Trump advisor Roger Stone and author J.K. Rowling.

Tom Perriello, who is running for the Democratic nomination for governor, was also there, but did not speak.

The march looped around on Main Street and ended at the federal courthouse on Broad Street.

The organizers also called for the president to release his tax returns. 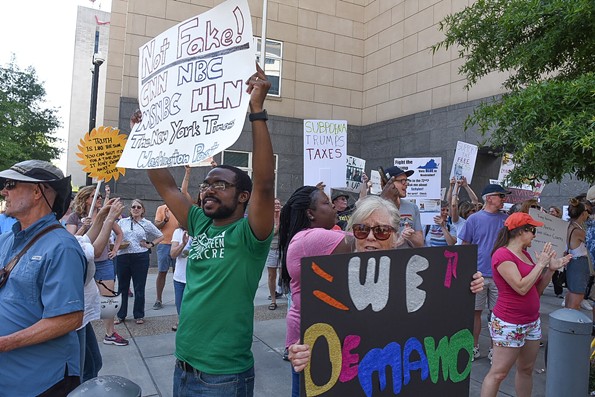