Senior Assistant for Policy
Office of the Governor of Virginia 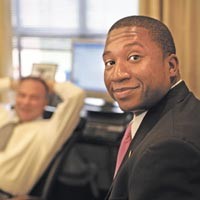 Marc W. Cheatham is a lending hawk. As one of Gov. Tim Kaine's top aides, he's helped fashion programs to stave off foreclosure of houses and offer state workers a way to avoid predatory payday lenders.

The senior assistant for policy came to his job when he was a summer intern in 2004 while pursuing his degree in social work at Virginia Commonwealth University. He struck up a working relationship with Kaine.

Cheatham was more mature than the usual college kid on a summer gig. The Tucker High School graduate enlisted in the Marines in 1996, served four years and started at VCU in 2001. But the Marines recalled him in 2002 and he spent eight months at Camp Lejeune, N.C., helping prepare battalions for combat deployment.

State government work followed. Kaine chose him to work on a program in late 2007 to help beat back the subprime lending crisis. Cheatham helped figure out ways to fend off foreclosures. Another effort, the lending program, gives state workers access to cheaper loans as an example to private business of how to beat predatory lenders.

His proudest effort, however, is his work at the Virginia Center for Inclusive Communities. “It's an amazing group,” he says, “a nonprofit that works across the state teaching diversity and tolerance of race and religions.” Cheatham has worked with the group since he was 14, and has also volunteered with Firehouse Theatre and Artspace Gallery. Earlier this year, Ebony magazine named him one of its “Young Leaders of 2009.”

For fun, he coaches Little League. “And I really, really enjoy Richmond,” he says.