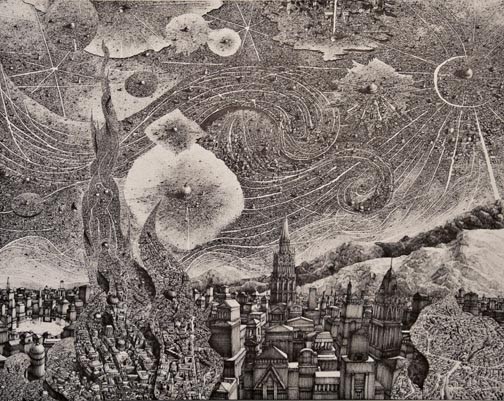 Parents take note: Legos and maps were the building blocks that resulted in a trumpet-playing fine artist whose new exhibition, "Eroica," is based on Beethoven's Symphony No. 3.

Benjamin Sack graduated from Virginia Commonwealth University in 2011, and his show of pen and ink drawings of richly detailed imaginary cityscapes form the basis of a symphony set to paper at Ghostprint Gallery.

The four largest works loosely correspond to the four movements of the symphony, not surprising given Sack's appreciation for music. "It was that piece [Symphony No. 3] that created his own voice and the beginning of the romantic period," Sacks says of Beethoven. "The centerpiece of my show is 'Us and the Universe,' a piece I started at the end of college. I was wondering what I was going to do as an artist, thinking about where I was going to fit in."

During the course of the next nine months, he worked on it ("Create your own metaphor," he jokes), capturing the minute details of miniature buildings, winding streets and the occasional open plaza, but with no clear sense of a specific location or even hemisphere.

"I've always been interested in history," Sack says. "A lot of history began in cities. Looking at the earth from space, cities look painted on the surface of earth, made of a million different parts. Each building is a note in a larger composition. Rather than drawing, it's more like composing to me."

Along with the four larger works, there are smaller works that echo elements of the main pieces. "Each piece is a journey, going into different worlds and seeing different things," he acknowledges. "Little details may be recognizable, but they're built on top of something indefinable. Is the landscape falling apart or coming together? It's that tension. I want the viewer to say, 'What?' and then, 'Oh!' Maybe that's what I'm after."

Up close, the large pieces reveal the minutia of a city, but with a step back the particulars blur and it becomes somewhat abstract. Sack recalls drawing castles as a child and being fascinated with architectural drawings and blueprints during his youth in ever-developing Loudon County. "Architectural drawings simplify the views and get rid of details," he says. "My approach to drawing reacted in the absolute opposite way."

So much so that he's learned to just tell himself that a piece is finished. "I'd keep going until there was no white space left and it became chaotic," he says. "I know I'm done when I see I'm being most honest to the idea I started with."

As for those shaping childhood experiences, Sacks recalls his brother knocking down his Lego creations not as sibling rivalry but as a personal challenge. "Each falling was an excuse for a new creation, a new world," he says.

As for his attraction to maps, he says: "When you look at a map, you don't think about who made it, you look for information or details. That's how I want the viewer to see my work. Don't think of the artist. Just go inside that world and enjoy it." S