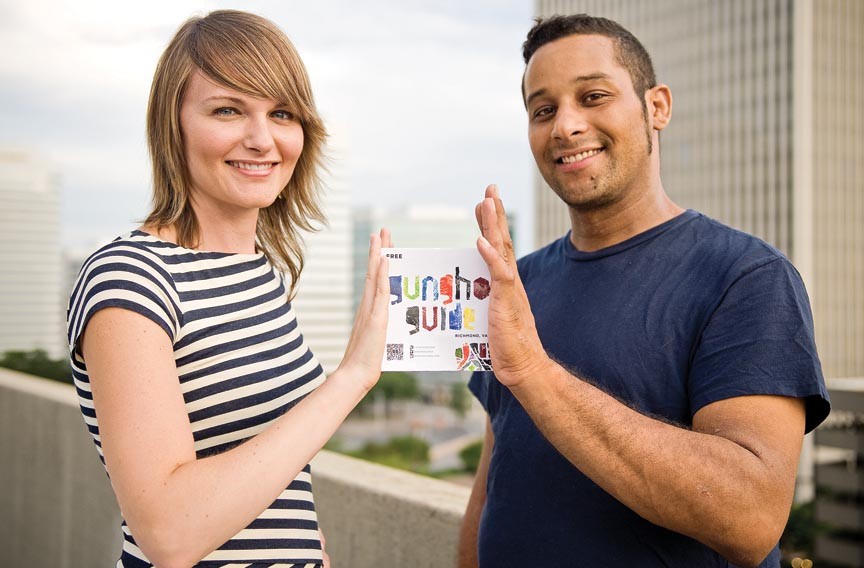 You may have seen them splayed on a sunny table at Lamplighter Roasting Co., artistically arranged in the window at Bygones or lined up at Sticky Rice on half-price sushi night. Gungho Guides are new maps in Richmond for those who want to be in the know.

Instead of offering a dizzying catalog of Civil War attractions and endless lists of restaurants, Gungho Guides adopt a more curated approach, including only 120 restaurants, bars, music venues, shops and cultural attractions that Brown and Detres see as "raising the bar."

"The people who need a guide like this are the people who don't want to waste their time," Detres says. "They're urban adventurers. They'd never find themselves in an Applebee's."

Those people likely find themselves with the locals. That's exactly what Brown and Detres want. Gungho is intended to act as a bridge between tourists and locals, they say, to enjoy the best that the city has to offer.

Gungho shows "what RVA has to offer on a national level, why you would want to come here," Detres says. Gungho also has developed a Charlottesville guide and hopes to expand to Charleston, S.C. The company makes money from advertising, although Detres says that doesn't influence which businesses and attractions make it onto the map.

Originally conceived by Brown in 2009, the guide recently celebrated its second year here with a new edition that updates roughly 40 percent of the 2011 listings. It extends the geographical scope out to Libbie and Grove avenues and offers a striking map of the city created by Virginia Commonwealth University advertising graduate Jennifer Maravillas.

Gungho is equally as interested in building the Richmond brand as in developing its own, reaching out to other organizations interested in attracting visitors and building the city's reputation. The Virginia Museum of Fine Arts distributes copies at the front desk. RVA Magazine will insert a guide into each copy of its next issue. And YRichmond, a program run by the Greater Richmond Chamber to help attract new talent to the city, offers incoming interns a Gungho Guide at the program's annual launch party.

"Richmond's legacy is solid," Detres says. "And it's not a matter of moving away from that as it is that there is just so much new stuff, so many new perspectives, so many new ways of engaging this city that deserve their due. "The new crowd deserves its moment in the sun." S