Canadian-born filmmaker Ron Mann has been making movies since he was 13, when his aunt gave him a Super 8 camera.

A lifetime of well-received documentaries later, one film he made as a teenager is still the most personal to him.

“The first film I made when I was 16,” he says by phone, noting that “Flak” (1975) was a short black-and-white film about his friends who lived beside a gypsum factory and were trying to reduce pollution emissions.

“It became a metaphor for the ’70s, how we devolved from a political decade to an apolitical one, where all we do is talk about the problem,” he recalls. “It was personal and it put me on a trajectory. It was pure on many levels, there were no pressures. … I strive still to be that amateur [laughs].”

Mann is a lifelong film geek, albeit one who has directed many beloved documentaries over the past four decades, often about subcultures he loves. His films include “Grass” (1999) about America’s draconian drug laws, “Altman” (2014) about the famous director, “Comic Book Confidential” (1988), and his most recent, “Carmine Street Guitars” (2018), a charming tribute to a longtime Greenwich Village guitar-maker who refuses to change with the times.

In conversation, Mann’s mind twists to its own funky rhythm and tangential recollections, with a patter that feels slightly like a stoned Harold Ramis. “I use that excuse ‘I don’t remember’ a lot now,” he says.

Starting out in the 1980s, he felt he had a responsibility to document alternative culture during the Reagan years.

“There was a swing toward conservatism and everything that was progressive, culturally, was being reduced to sex, drugs and rock and roll,” he says.

Today he considers himself more cultural historian than filmmaker, noting that he found early inspiration from director Emile De Antonio, “the Michael Moore of his day,” a countercultural figure who made Vietnam doc “In the Year of the Pig.”

His movies are not only historical primers, but can also function as tools for grassroots organizations.

“What I do is propaganda, but my propaganda is called the truth,” he says, laughing. “I did a film with Margaret Atwood, a 70-year-old who donated the profits of her book tour to save songbirds, basically a message to boomers to get off their asses and engage.”

The director of “Grass” is amazed to see the progress some American states have made on marijuana laws: “Woody Harrelson once said to me, you look at a mountain and it doesn’t look like it’s moving. But after a period of time, it actually does move.”

These days, Mann splits his time between Austin, Texas, Woodstock, New York, and Toronto, home to his boutique distribution company, Films We Like.

His friend, filmmaker Jim Jarmusch, was the guy who suggested he look into the Carmine Street Guitars shop. Mann met Jarmusch years ago at the Toronto Film Festival, where the indie director with the similar shock of white hair was preparing a talk for the Telluride Mushroom Festival about psilocybin in cinema. Mann went to the festival and was inspired to make a movie, “Know Your Mushrooms” (2008).

Later, when both directors were at the Big Ears Festival in Knoxville, Tennessee, Jarmusch and his Sqürl bandmate Carter Logan, couldn’t stop talking about Rick Kelly, the likable custom guitar maker who is so memorable in the film with his quiet observations and love for using rare pine and other woods from historic New York buildings.

“Alfred Hitchcock said that in fiction films, God is the director but in nonfiction the director is God,” Mann says. “But I had no idea these musicians were going to come in. [Jarmusch] said it was like a post office, a wonderful kind of crossroads with such a wonderful history – Lou Reed, Robert Quine.”

The most dramatic moment comes when a young real estate agent, who just sold Jackson Pollack’s former building next door, sticks his head in to say hello and the usually friendly Kelly barely acknowledges him.

“Absolutely. That was unplanned. The film is really about change and what we’re losing,” Mann says. “This is happening everywhere. I just got evicted from the building I had been renting for 33 years, which was sold and is being turned into a condominium in Toronto. It’s scary.” 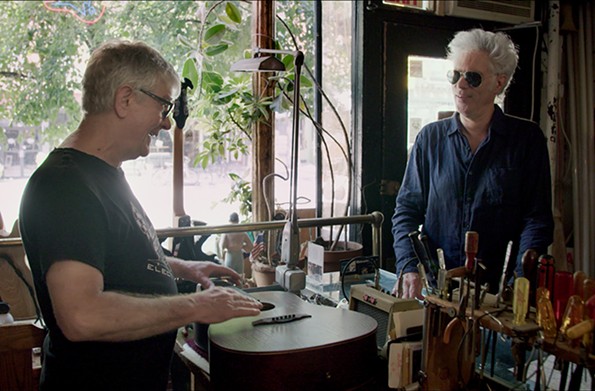 The documentary was inspired by two of Jarmusch’s movies, “Coffee and Cigarettes” and especially, “Patterson.” “I borrowed that trope of a week in the life of a guitar shop from that film,” he says. “[And] I followed Altman’s dictum that the film will tell you what it is.”

So what does he think about the current, Netflix-inspired golden age of documentaries? “Well, Netflix controls your film, how it’s seen and if it’s an original, how it’s made,” he says. “So don’t pretend the artist’s vision isn’t impacted, unless you’re Scorsese or someone.”

The good news is that there are increasingly more streaming services, he says.

“Filmmakers and distributors put their films on their own platforms. But because its digital, there is a plethora of films. You need curation,” he explains. “Real estate has decimated movie theaters, where they can’t afford to show independent and international films. When you don’t have international films, you have an insular North American culture. That is dangerous.”

Today, grants for American filmmakers can be hard to get unless your subject includes identity politics, while Hollywood traffics in sequels and comic book movies.

“The algorithms have replaced the accountants,” Mann says.

“That’s the death of cinema.”