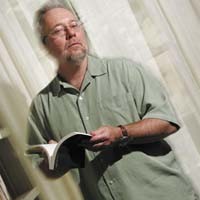 Richmond has its share of professional writers. But the hub for serious literary writing in the city is Virginia Commonwealth University's nationally ranked creative writing program. And poet David Wojahn, its director, recently added another feather in the cap of the program.

This year, Wojahn was a finalist for the Pulitzer Prize in poetry for his book, "Interrogation Palace." That collection also won the 2007 O.B. Hardison, Jr. Poetry Prize, given annually by the prestigious Folger Shakespeare Library. You may have also seen Wojahn's work in The New Yorker, The New York Times Book Review, The Paris Review or The Kenyon Review, among many other publications.

Most of Wojahn's work is metrical, although he occasionally works in free verse, and he's known for addressing political and social issues.

This year marks the 25th anniversary of VCU's creative writing program, and in January there's a special reading planned at the Association of Writers & Writing Programs conference in New York featuring former VCU faculty and alumni.

"I think [the program] has been very important for Richmond's cultural life," Wojahn says. "There's been a lot of commitment on the part of the administration here, which is very unusual except for programs that are highly endowed and high profile."

Wojahn, who's working on a new book of poems and a book of essays on poetry, gives readings around the country and teaches at various writers conferences, but most of his work focuses on VCU. He's on the advisory board of Blackbird (www.blackbird.vcu.edu), VCU's online literary journal widely considered one of the best in the country.

"It's been one of the jewels in the crown of the program," Wojahn says, noting that the journal has been garnering international attention and a huge readership thanks not only to its quality work, but also because of the high-profile release of an unpublished Sylvia Plath poem last year.

As far as the looming concern that younger generations aren't reading as much poetry anymore, Wojahn's not worried.

"People will always be interested in poetry. There are holes in their lives that can't be filled in any other way," he says. "I think a lot of the talk about developing audiences for poetry, or making poetry books bestsellers, in some ways it's kind of beside the point. People write poetry and go to the arts because they want to have a rich private life."