Man of the Land

Painter Eldridge Bagley is still capturing vanishing rural Virginia like no other. 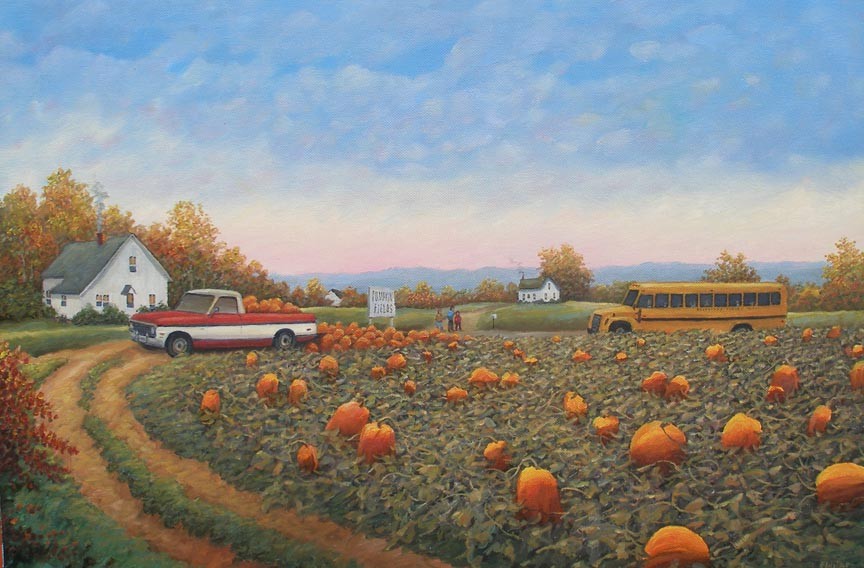 Forty years ago this year in January, Eldridge Bagley — at the age of 27 and still living with his parents — briefly left his family's tobacco farm in Lunenburg County and drove to nearby Victoria, a former railroad town that was long past its heyday.

He was headed for Harold's 5 & 10 Cent store. It didn't have art supplies, but it did have paint-by-number sets and he bought one of those.

That was the start of an unlikely career for Bagley, a self-taught painter, who perhaps more than any living artist has captured vanishing rural Virginia.

"When I was in the tobacco field," Bagley recalls, "I would write songs and poems to keep myself occupied."

He'd long felt a pent-up creative urge but he couldn't quite identify it.

Then, by chance, he was leafing through an old Reader's Digest at home. He came across an article about the struggles that Grandma Moses, a farm wife who raised five children and lost five others, had overcome before she began painting in her late 70s and became one of America's most celebrated folk artists.

Bagley felt a stirring. The only thing he'd ever known was the farm. Still, he thought that if an artistically untrained farm wife could overcome the obstacles facing her, perhaps he should try.

He took out the paint-by-the number set he'd purchased in Victoria, went up to his room and began painting.

"It was like a dam burst," Bagley says. "It's never let up." In 2011, the Folk Art Society of America named him artist of the year.

Much of Bagley's career has been written in Richmond, which discovered and nourished him and fed the frenzy that accompanied his early work, when his one-man shows would sell out in minutes.

People camped out in front of galleries to be the first in line. Others paid substitutes to stand in line for them, as would-be buyers maneuvered to have the first choice of his paintings. Many were sold sight unseen on the basis of photographs.

Much of the frenzy has subsided, and the recession hit artists especially hard. But Bagley's one-man shows continue to be singular events, as buyers and Bagley-watchers wonder what curiosities will show up on his canvases.

During a recent interview at his home on Poor Farm Road in Lunenburg County, Bagley, 67, reflected on his career, his life and his evolution as an artist.

"I've never had a steady job and a paycheck," he says. "That's one way farming prepared me to be an artist — the uncertainty of income and the irregularity of it."

In the beginning, Bagley showed his paintings wherever he could and wherever he thought people might have an interest: in bank lobbies, stores and local festivals.

"I had never been in an art gallery," Bagley says.

Not quite a year later, after painting furiously for a month, he arrived at the door of the former Scott-McKennis Fine Art Gallery in Carytown. He held two shows there before the gallery closed.

Then Bagley was introduced to Helen Levinson, director of the former Cudahy's Gallery in Richmond. She became his representative and his guiding hand. It was 1981.

"His paintings were heartfelt and very unique," Levinson recalls. "Even though I'm from New York City, I related to them. They were true: absolutely no phonies. Ours became a love relationship from the beginning."

Bagley's wife, Beth, a former registered nurse, says she had no idea how much of a local celebrity her new husband was when they married in 1991.

But when people started arriving at his shows before dawn or rushed toward their car when they drove into a parking lot — perhaps hoping to buy a painting while he was unpacking — the celebrity hit home.

It affected everybody, she says, except Bagley.

"Eldridge never bought into that," Beth says. "He was never that impressed with himself. He was grateful there was interest, but he never took ownership."

Bagley says he's never considering leaving the area of Lunenburg County. He draws his inspiration from the people he meets, the places he visits and a vast warehouse of memories that flood back every time he sits down to paint.

His paintings most often tell stories about the rigors and joys and tragedies of rural life, the intrusion of the urban environment on the pastoral, the passing of one way of life for another.

Years ago, Bagley had a small frame studio built behind his house. It's there that he retreats to bring a vision to canvas.

He paints under a fluorescent lamp attached to a long arm that can be moved around while he examines different aspects of the painting.

Stanley Spencer, a neighbor who lives across the road and grew up with Bagley, has seen a light in the studio late at night when he's gotten out of bed to get a drink of water. Spencer says he admires Bagley for taking care of his parents in their old age and donating many of his paintings to charity events to raise money for special causes.

"Nobody I know has a bad opinion of him," Spencer adds, noting that Bagley remains the humble, churchgoing man he's always known.

When the recession hit, and people began holding back on purchases, Bagley says that like many artists, he went looking for ways to expand his audience.

He says not everyone wanted to pay the $4,000 or so that his traditional 18- by-24-inch landscape paintings typically bring. So after talking with Levinson and others, Bagley began also offering smaller works at smaller prices.

He'd always done those smaller works, but has never shown them in one-man shows in Richmond. "I wanted to offer a variety of sizes that would stair-step up," he says. "What I came to realize — and this was really a revelation to me — that it opened a new door of creativity for me.

The Glave Kocen Gallery on Main Street is the principal outlet for Bagley's work. One of the owners, B.J. Kocen, says that Bagley has responded magnificently to market demands, while introducing a new generation to his work.

"Last year, we sold over half the exhibit," Kocen says. "These days, that's a knockout. Most galleries are happy to sell three or four pieces."

A religiously devout man, Bagley has always believed that divine guidance has helped shape his career, his subject matter and his life. He doesn't know whether he's at the tail end of his career, midway through or only at the beginning of a new chapter.

"Only God knows where I am," Bagley says. "It's not in my hands, but I sincerely believe that some of the best work I've ever done, or will ever do, is still in me." S