Man of Many Faces 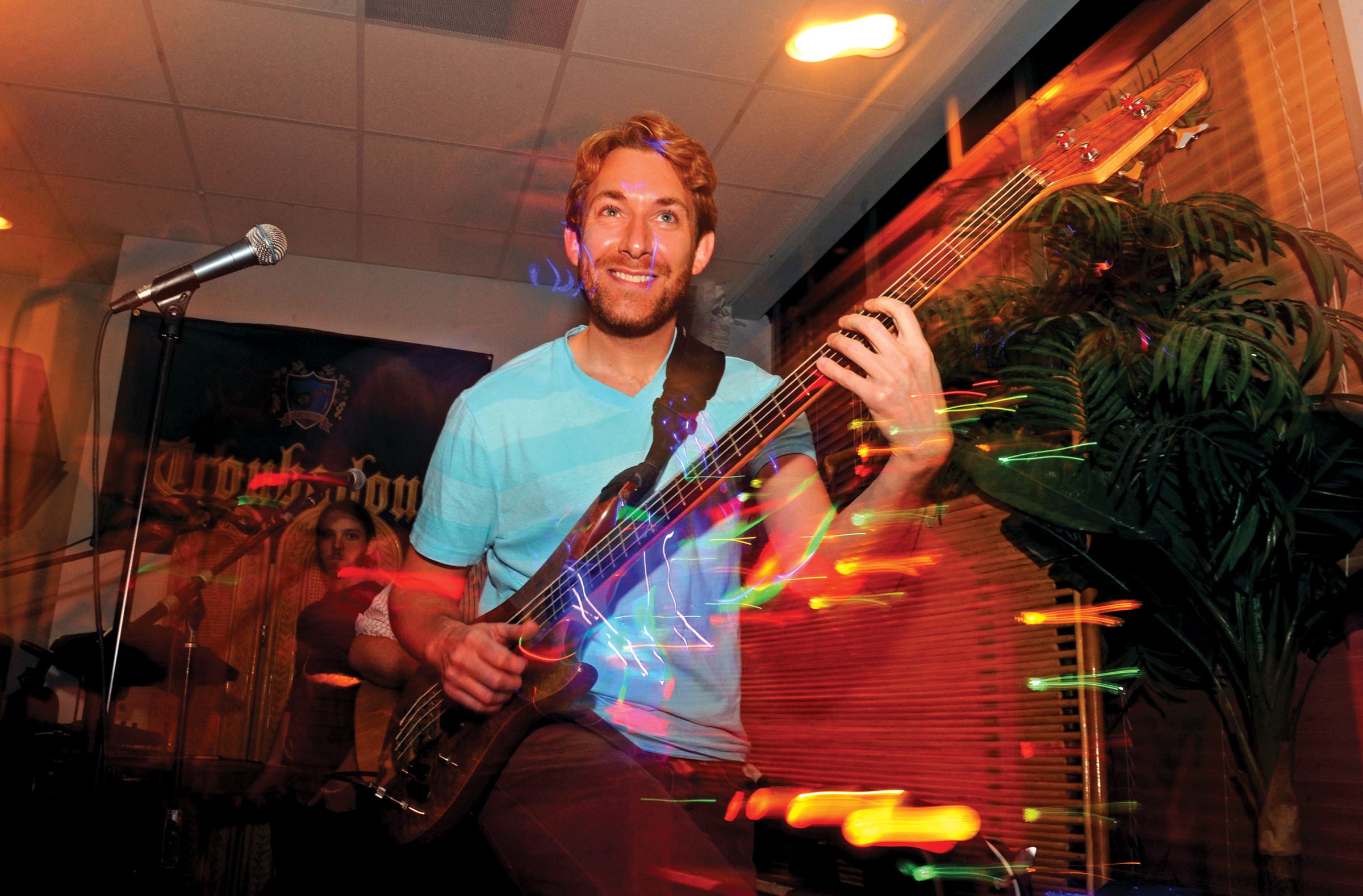 It's Monday night at Mekong restaurant, high-end craft beers are $5 a glass and Todd Herrington's band, the Mekong Express, is playing. The recessed lighting is dimmed down to late twilight, with a string of Christmas bulbs draped across a Brooklyn Ale backdrop.

The guitar-heavy three-piece band is flowing through an epic exploration, starting with Herrington's gently lyrical fret-board bass figure, over which seamlessly connected musical vignettes alternately rock out and whisper, like an instrumental version of the second side of the Beatles' "Abbey Road." Herrington is at the center and the others take solo, providing the visceral heartbeat of the band, laying down lines felt as much as heard.

It isn't Herrington's only band. It isn't even his only Mekong-themed band. The New Belgians — named after the brew preferred by the bar's self-titled chief beer officer, An "Mekong" Bui, who just nabbed CraftBeer.com's "best beer bar in America" title again — still makes the odd appearance. The weekend before, the Express played the West Virginia Camp Barefoot Festival with Herrington's two other high-profile bands, the DJ Williams Projekt and James Brown tribute the Big Payback.

"I've been playing full time since high school," Herrington says. In the late '80s, when he was 14, Herrington played classic rock covers with the Mystic Biscuits with guitarist Frank Jackson and then future local alt-rock sensation singer Regan [Nunnaly Sprenkle]. They were accomplished enough to become the house band at Shockoe Bottom's Moondance Saloon for its weekly open-mic night. Later, he and Jackson were in Buzby, with former Broadway child star Lydia Ooghe ("Les Miserable," "The Secret Garden"). The core of Buzby and Herrington, Jackson, drummer Joel Denunzio, saxophonist J.C. Kuhl then joined with keyboard player Daniel Clarke to form Modern Groove Syndicate.

In Modern Groove's early days, D.J. Williams opened with a solo set. When he formed his eponymous Projekt in 2003, Herrington was a natural choice. "Todd is a man of many masks and faces," Williams says. "If he was not a musician he should be doing voice-overs. It comes out in his playing. He has so many characters inside, and each contains the element of surprise."

"For a long time [2005-2010] you could make a living on the jam band circuit playing instrumental music," Herrington says. "I played about 300 shows a year. ... For a solid four years I only had Sunday nights off."

After over two decades building a musical foundation, Herrington reveals his freewheeling range with his first album, "Things." Recorded in multiple sessions over several years, the lineup is a recapitulation of his musical journey. Lydia Ooghe sings, as does Jonathan Meadows from the Congress. Groove Syndicate compadres Clarke and Trey Pollard play, along with No BS Brass! stalwarts Reggie Pace (Bon Iver), Bryan Hooten and Marcus Tenney. The New Belgians' Brian Mahne plays organ, Brian Jones (Agents of Good Roots) plays drums and Scott Milstead (Carbon Leaf) provides percussion. Frank Jackson, who's been with Herrington from the beginning, is here as well. Simmons and trumpeter Mark Ingraham from the DJ Williams Projekt also are on board. And the album's Kickstarter campaign shot past the fundraising goal of $5,000 by enough to provide for a high-end vinyl edition.

Even in rough-mastered form the songs are polished, including the gently grooving "What We Had," Ooghe's eclectic vocals on "Lullabye," and "Punchtown," a rocking, radio-ready song that evokes the complexity of '80s art band XTC, albeit with Beach Boys harmonies.

"The styles are all over the place," says Clarke, who played a key role in the album's production. "Music is always best when it is in the moment, and Todd is always coming from a natural place. His musical voice is unique."

A one-time visual arts student at Virginia Commonwealth University, Herrington has exhibited his paintings around town, offering them as Kickstarter rewards for major donors. But one of his longest-standing gigs started when he volunteered to be an instructor of English as a second language in 1998. "It was life-changing," Herrington says." Those people come from everywhere, and they are working so hard to build a new life." Even when he's been hours away on a tour, he's driven back to Chesterfield County to cover his classes — and then back again to take the stage.

Tonight, he led one of those classes — the start of a new semester — before playing at Mekong. It's appropriate that the man of many voices finds deep satisfaction in helping other people to express themselves. S

Todd Herrington plays every Monday night at Mekong with the Mekong Xpress, and can be seen with the DJ Williams Projekt, the Big Payback: a Tribute to James Brown, Modern Groove Syndicate, and the New Belgians. A record release party will be held Nov. 8 at the Camel.