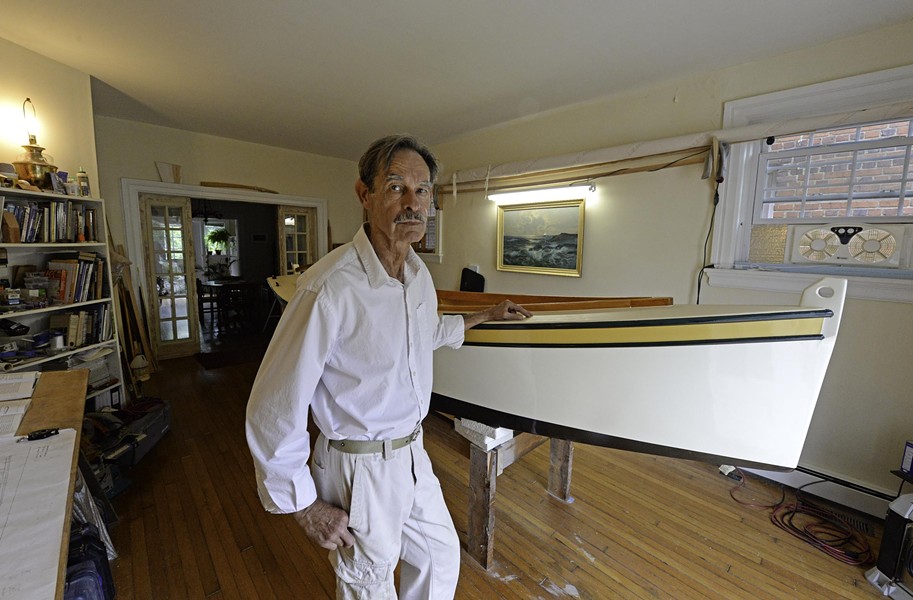 Scott Elmquist Verlon Vrana built a boat in his living room because his bedroom was too small.

Local carpenter Verlon Vrana says the idea came to him the first time he walked into the living room of his new apartment on the Boulevard.

That would be a 14-foot sailboat, built using a pre-Civil War design he found in a book. Three years later, his boat, Dido, was ready to hit the water.

Vrana is fairly certain it's the first time anyone's built a boat in the living room of a Fan apartment. (Style Weekly was unable to find any indication he's wrong.) But he says no one, his landlord included, gave him any trouble. "The Fan is a good place for this kind of stuff," he says. "They're used to eccentric projects, I think."

Vrana, who's worked on renovations in the Fan for 20 years, chose to turn his apartment into a workshop to save money. He picked the living room because it's the biggest one in his apartment.

Until last weekend the boat, constructed of Douglas fir, sat as a proud testament to his work in the center of the room, its mast hanging on the wall. Last weekend he and his friends carried the boat out through double doors and hoisted it into the bed of his pickup truck for a test run on the water. After he gets a feel for it, he plans a three-day journey down the James River.

Would he turn his home into a workshop again? "No," he says, laughing — the dust was hell. "Twice last summer I got sick as a dog from the dust — sanding, the paint, sanding epoxy. And this is all Doug fir."

But he does want to keep building boats. He has significant sailing experience, and cites an article in the latest issue of WoodenBoat Magazine about the explosion of youth boat-building programs. He'd like to start one in Richmond, and while he doesn't use a computer or email, he hopes that anyone interested in helping get a program off the ground will call him at 804-926-4739.

"Richmond has a beautiful river running through it," he says, "The city, I hope, will support my idea of having a boat-building program here."