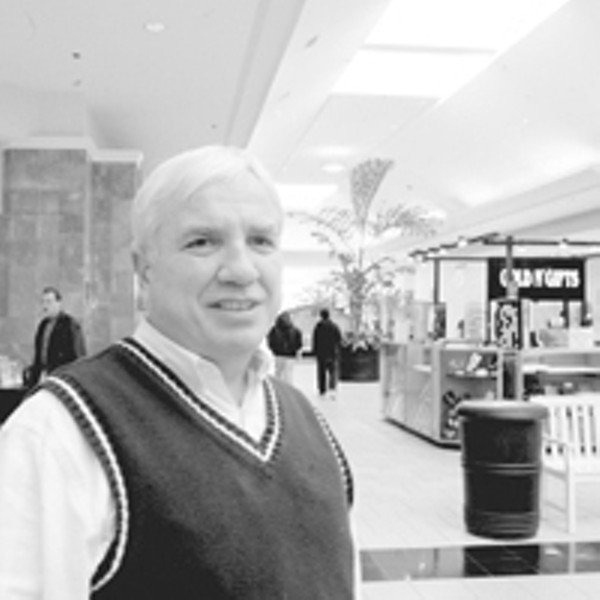 The history of South Side Richmond's malls reads like a dynasty of kings.

Once upon a time, Southside Plaza on Hull Street was the prince of retail, as Richmonders flocked to visit the city's first suburban Miller & Rhoads.

In the 1970s, the new Cloverleaf Mall at Midlothian Turnpike and Chippenham Parkway became the area's first regional mall, stealing shoppers from the Plaza and most of metro Richmond. Shortly after, Chesterfield Towne Center sprouted to the west. By the early 2000s, Cloverleaf had lost all of its anchors. Today it sits nearly vacant.

Chesterfield Towne Center, the current retail king south of the river, is trying desperately to keep history from repeating itself as competitors emerge. Already, competition has intensified with the upscale Short Pump Town Center and Stony Point Fashion Park, the two "lifestyle centers" that opened in 2003. Now the proposed Watkins Centre at Midlothian Turnpike and Route 288, an enormous complex of offices, industrial space, homes and — most significantly — a third lifestyle center, has put owners of the Chesterfield Towne Center on the defensive.

They've launched a grassroots campaign to prevent Watkins Centre from getting the rezoning it needs, arguing that a lifestyle center and big-box cluster can only succeed by cannibalizing existing stores along Midlothian Turnpike.

In January, mall owner The Macerich Co. sent letters to about 40,000 "Valued Shoppers" in the county. The letter, which avoids the mention of any potential problems for the Towne Center, says the Watkins Centre will have a "negative impact on the overall health of retail in the county."

It steers residents to a Web site, www.chesterfieldfacts.com, and to a study commissioned by Macerich that argues there are few "significant tenant opportunities" for a new lifestyle center. The study by Stoffel & Associates looks at 130 typical tenants for lifestyle centers and concludes that most of them already exist at Short Pump, Stony Point and other area malls.

The study suggests some stores that could work well at Watkins would be IKEA, Bass Pro, CompUSA and Babies "R" Us, as well as some discount clothing stores like Marshall's or Ross. And maybe Hobby Lobby and Petco.

"We are not anti-growth, and we're not fearful of competition," Siebenaler says. But the Watkins retail proposal "didn't make a lot of sense as far as what smart growth should be," he says.

The county planning commission is set to consider the rezoning of the 800 acres for the Watkins Centre Feb. 21, after which the Chesterfield County Board of Supervisors will make the final decision on the rezoning. But the county can't dictate or control what types of stores eventually crop up at Watkins.

"There's not a whole heck of a lot that can be done to stop the march of retail progress," says David Urban, a professor of marketing at Virginia Commonwealth University who specializes in retail shopping trends.

There are other forces at work. Chesterfield, with more than 283,000 residents, has the metro area's largest population, but gets far less revenue from sales taxes than Henrico County. Chesterfield County leaders would like to recapture some of the money its residents are spending at malls in Henrico and Richmond. The completion of Route 288 last year has also made it easier for residents to bypass retail on Midlothian Turnpike for the newer environs of Short Pump.

Still, Chesterfield Towne Center has managed well since the malls at Short Pump and Stony Point opened, manager Siebenaler says; sales were more or less flat in 2005. (A block of vacancies mall shoppers may see has nothing to do with the mall's health, he adds: Troubled national chain Retail Brand Alliance Inc. recently closed three clothing stores in the Towne Center, he says, and many leases end in January.)

The mall's success depends on the "healthy real estate climate" around it, Siebenaler says — a climate that will only sicken if the Watkins plan goes through.

Sen. John Watkins, R-Powhatan, whose family owns a sizable portion of the 800-acre Watkins Centre tract, disagrees with the conclusions of the mall's study. Developers already have "a bunch" of retailers lined up that don't have a presence in Richmond, Watkins says, though he wouldn't say which. "They don't want to come to Chesterfield Towne Center," he adds.

Some renovations are being planned, Siebenaler says. VCU professor Urban says he doubts a simple facelift could bring crowds back to Chesterfield. "It's not as though you're going to transform Chesterfield Towne Center into one of these new lifestyle centers," he says.

While the aging Shops at Willow Lawn is undergoing a massive renovation aimed in part at producing the fashionable open-air look of a lifestyle center, Urban says it would be very hard for Chesterfield, with its traditional enclosed layout, to do the same.

Urban does, however, believe the study has a valid point: that the success of the retail part of Watkins Centre depends entirely on "Who's in it? What stores are there?" The retailers that decided to go to Short Pump studied the demographics of the area, Urban says, and they're unlikely to add second locations at Watkins. "How much newness can this lifestyle center really have?" he asks.

Not to mention that destination stores such as IKEA, should they come to Richmond, would prefer to be located on major thoroughfares at Interstates 95 and 64, Urban says, and not a local road like Route 288.

Chesterfield residents have jumped into the fray. About 30 wrote letters (mostly against allowing Watkins Centre) to the county. Others, Siebenaler says, have said, "Well, you killed Cloverleaf. … Why should we care now what happens to you?"

Will Chesterfield Towne Center be killed by the Watkins Centre? "No more so than it killed retail down at Cloverleaf," Sen. Watkins says. S