They sweat. They swagger. They judge lima beans.The faces behind the corny comfort of the State Fair. 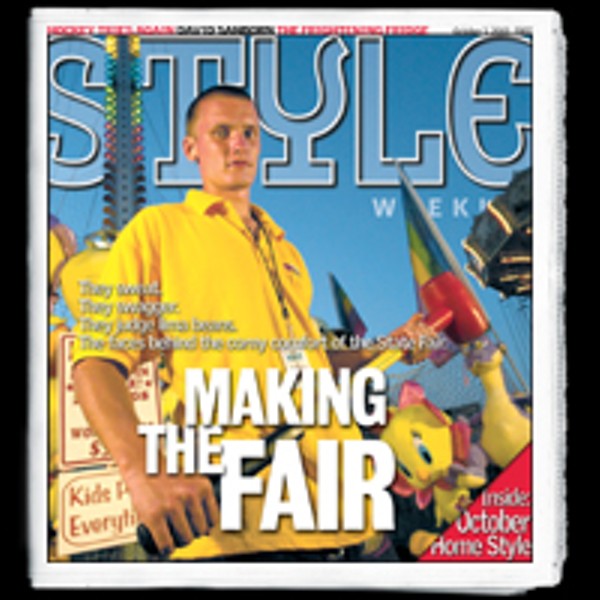 But I am here to stand up and be counted as one of the few, the proud — the crazed? — who absolutely worship the fair for all of its loud, smelly, garish beauty. For sheer kitsch and a bizarre barrage of sensory experiences, for all that is the very antithesis of the oh-so-stylish new malls that grace us to the south and west, for a reminder of what fun was before there were Xboxes and iTunes, there is nothing left in this world quite like a state fair.

As a longtime fair fan, I have keen, sentimental memories of these 11 days. At age 7, I rode in a helicopter that I swear had no floor. I was traumatized for days. Once I wore my plaid kilt instead of pants and then couldn’t go down the giant slide — the only ride I’d even consider because of my motion-sickness affliction that practically requires a barf bag for the merry-go-round. A low point was the time a friend and I spit on people’s heads from the skyride that offered a view from above — I must have been a surly 13. As a grown-up and parent, I’ve checked out the six-legged cow (yes, it really did have six — two coming out between its shoulder blades!), the minilady, pig races, elephant rides and every imaginable food. My all-time favorite, no longer at the fair because of its age and bulk, is the log home — a 1950s house, complete with bedroom and kitchen, carved out of a segment of redwood tree. Entirely too cool.

A connoisseur’s key to deep appreciation for the fair lies in the haphazard juxtapositions that present themselves at every turn. The funky Tilt-A-Whirl ride is next to the authentic living history village. The cheery bumblebee ride is adjacent to the half-sunk inflatable Titanic (Isn’t there something macabre about a fair ride based on a ship on which thousands died?) which is across from the Tech Chick Bar B Que chicken booth that is next to the tent where live poultry are on display. A sales display of plastic, above-ground pools and spas lies between a mechanical-bull ride and Demetri’s Gyros. For throwing a dart at a balloon, you can win a soft, furry prize the carny calls “Virginia roadkill.” It’s just all too wonderful!

The wacky cacophony of sounds, sights and lights swirling around on acres of asphalt could be disorienting if it weren’t so darn fun. Recoil in horror from a rattlesnake handler who says he prefers venomous vipers to the garden variety, or drool over shiny new orange tractors that tempt weekend warriors. There are the backhoe-dug faux trenches that serve as props for the war re-enactors, seven pink piglets feasting on a clearly fatigued mom, and an American Indian food stand that serves gator, buffalo and apple-butter biscuits. You can buy a decal from a booth selling hundreds of cartoon characters throwing up on everything from health food to husbands or catch a glimpse of a Fun-House worker who actually lives in the back of the Fun House.

Yes, there are newfangled attractions that cast questionable cultural commentary — like Big Daddy, the monster truck that you can ride in as it crushes forlorn-looking cars. But what is still so sweet about the fair are the 4-H kids crouched in pens with prize calves, the blue ribbons pinned onto crafts of children and adults who have put their hearts into thousands of stitches, the low-tech bumper cars careening wildly with sparks flying and riders laughing their heads off. It just doesn’t get any better than that. — Elizabeth Cogar