Producer Michael Gottwald's credits include “Wendy” and “Beasts of the Southern Wild.”

Richmond native Michael Gottwald parlayed his childhood love of movies into a major film career. The Oscar-nominated producer’s credits include the 2012 arthouse hit, “Beasts of the Southern Wild,” and 2017’s “Patti Cake$.” Both films were favorites at the Sundance and Cannes film festivals.

Gottwald’s other Sundance premieres were the narrative film “Farewell Amor” and docufiction project “Bloody Nose, Empty Pockets.” The Hollywood Reporter praised “Farewell Amor,” a drama about an immigrant family from Angola, as “a moving exploration of the meaning of home.” IndieWire judged “Bloody Nose, Empty Pockets,” a Las Vegas-set account of a bar’s wild last night of business, as “a grand cinematic deception and a bold filmmaking experimentation.”

“It was a good Sundance for us,” Gottwald says from New York, his home since 2017. “It was the culmination of a lot of years and different kinds of work, coming together at the same time.”

“Wendy” director Zeitlin characteristically crafted his second feature film over a period of seven years. He co-wrote “Wendy” with his sister, Eliza, who’s also the film’s production designer. The Zeitlins loved “Peter Pan” during their childhood in Queens, New York. They turn the story’s focus onto Wendy, a girl who finds Neverland but then, unlike the forever young Peter, feels compelled to leave the imperfect paradise. The movie hasn’t received the overwhelmingly positive reaction critics awarded “Beasts of the Southern Wild.”

If Zeitlin’s years of work on “Wendy” concerned Gottwald, one of the film’s executive producers, he wouldn’t admit it.

“Benh is deliberate in his decision-making,” he says. “It had to take as long as it did. You see the intention behind every element in the film, and why it is the way it is.”

“Wendy” filmed for 60 days of intermittent production in 2017 with additional shooting in 2018 and 2019. Locations included the Louisiana Steam Train Association’s railyard near New Orleans, the Amtrak railway at Lake Pontchartrain, the Caribbean islands of Montserrat and Antigua and caves in Mexico. “Each stage of the film is its own thing,” Gottwald explains. “We had multiple shoots with the kids and the mother creature in the film (a singing, whalelike being). There was a lot of trial and error, but film just naturally takes a long time.”

Shooting on Montserrat with a cast of mostly nonprofessional actors, including many children, was challenging.

“It’s a beautiful place with mountainous, winding roads,” Gottwald recalls. “But any time you’re dealing with kids and a boat and a live volcano, it takes a lot of coordination. Even after you’ve planned and coordinated, you have no idea what’s going happen when you get there.”

Gottwald and Zeitlin have been collaborators since 2003, the year they worked together on Zeitlin’s senior thesis film at Wesleyan University in Connecticut.

“Benh needed a first assistant director,” Gottwald remembers. “I was organized and I wanted to help.” Their creative partnership continued in 2006, when Gottwald went to New Orleans to help Zeitlin make his short film, “Glory at Sea.” In 2009, following work for Barack Obama’s presidential campaign, Gottwald joined Zeitlin in New Orleans again to produce “Beasts of the Southern Wild.”

“We didn’t really know how to make a movie until we invented our own movie,” Zeitlin says recently in New Orleans. “We learned how to do those jobs and now those guys are amazing, professional producers. We grew into what we’d played make-believe at when we first moved to New Orleans.” 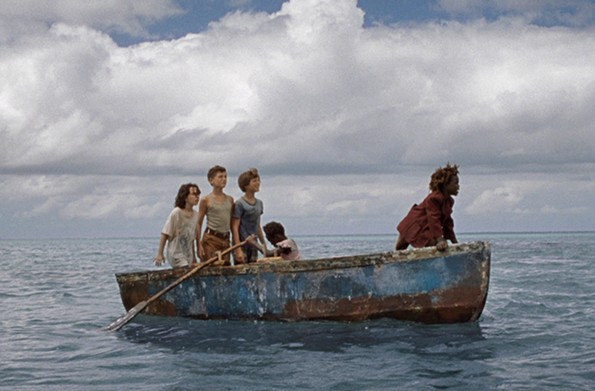 Wallis and Henry, like the cast of “Wendy,” were nonprofessional actors. The “Wendy” cast includes Devin France from Raceland, Louisiana — a 9-year-old when she shot scenes in 2017 — as the film’s title character. Zeitlin credits Gottwald for the casting process he used for “Wendy” and “Beasts.”

“We work in communities where films don’t usually get made,” Zeitlin says. “So, there’s always a process of building relationships. And Michael can go into any situation and people gravitate toward him and trust him. He’s got that sort of goodness about him. Through that we found really amazing actors in south Louisiana.”

In 2017, Gottwald moved to New York following eight years in New Orleans. He’s since split his time between Louisiana and Brooklyn, but now, having recently bought a house in New Orleans, Gottwald anticipates spending more time there.

“It’s a lovely place to make art, to write, to be creative,” he says. “My fiancee [writer and New Orleans native Jean Riess] and I have a fantasy of living in New Orleans in winter and New York in the summers.”

In Richmond, Gottwald grew up in the Westhampton neighborhood and near South Side’s Riverside Drive. His interest in film blossomed during his high school years at the Collegiate School. Two film-loving faculty members — student newspaper advisor and swim team coach David Stott and weight coach and poet C. Mitchell “Skip” Johns — fueled that interest. The late Johns screened movies during lunch period, including such silent classics as “The Cabinet of Dr. Caligari” and “Metropolis.”

“Skip Johns knew cinema and what was special about the medium,” Gottwald remembers. “He was one of the first people I met who loved movies as much as I did.”

The informal screenings served as an inspiring film appreciation course. Gottwald’s other cinema activities at Collegiate included writing movie reviews for the student newspaper and, his first foray into filmmaking, making film parodies of “Dawson’s Creek” and “American Beauty.” Although his movie reviews were inconsequential, Gottwald claims, he enjoyed making the student films. “I really liked putting the films together, editing with the software we had in the computer lab, setting it to music.”

Following his cinematic muse, Gottwald didn’t decide to be a professional filmmaker for years.

“It just kind of happened when I helped Benh make ‘Glory at Sea,’” he says. “I was really just a glorified PA [production assistant]. When the chance to make ‘Beasts’ came along, I chased that opportunity, but I still did nonfilm work after that. It was really only when we formed our company, Department of Motion Pictures, that I actively decided to be a producer. It felt like a moment we should capitalize on. There were other filmmakers with interesting projects to work on, so we did.”