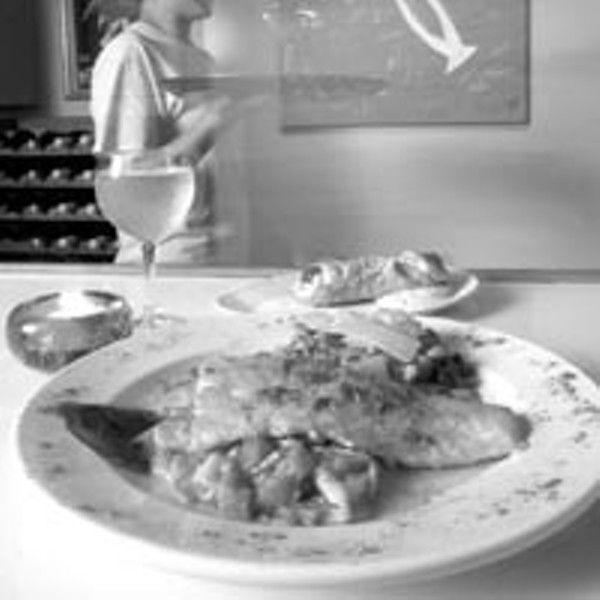 The kitchen retains a distinctly Italian flavor, including a selection of moderately priced pastas, which were a tradition at Pagliacci. The main part of the Spoon's menu, however, is more innovative and eclectic.

For example, a chicken breast is stuffed with artichokes and lump crabmeat and wrapped in a roasted red pepper. The result is a juicy, beyond-ordinary version of an old favorite. Likewise, fresh halibut gets a flavor boost from a crust of green onions and is served on a bed of hash that combines crabmeat and Yukon Gold potatoes.

Veal Milanese is pan-seared (almost blackened), lightly crusted with Italian herb bread made daily by Woodward — like all of the breads and pastries — and accented by fresh lemon.

Bouillabaisse, an occasional special, features a large piece of bluefish along with the usual assortment of scallops, clams and shrimp. Other specials may be seared scallops with lime barbecue sauce or a New York strip steak with roasted shallots and salsa.

A noteworthy side dish, which comes with most entrees, is greens and beans, a combination of kale (or escarole) and Great Northern beans.

Special treatment is also given to the mashed potatoes, which are peeled, crushed and baked to a crisp with scallions and topped with a light Alfredo sauce or sour cream.

Italian grilled cheese is a pleasing combination of prosciutto, fresh mozzarella and basil between slices of toasted artisan bread and topped with marinara sauce. But it tastes more like a toasted ham-and-cheese sandwich than a grilled one.

Eggplant parcels, so named because that vegetable is used to wrap stewed tomatoes, mozzarella and basil, is chewy to the point of being tough, even though it's drizzled with sun-dried tomato vinaigrette and sprinkled with pine nuts.

Tuscan bean soup, available at both lunch and dinner, is a very thick, flavorful blend of white beans, potatoes, onion, leeks and Savoy cabbage, garnished with oregano and parsley.

Dessert, which was a hallmark of Pagliacci, also provides a fitting climax to a meal at The Wooden Spoon.

The only parts of dessert not made on the premises are the shells for the cannoli. Piacente even makes the ice cream, which is served alone or with apple brown betty. The cheesecake is a recipe from Mr. Buono's in Brooklyn.

Woodward, who is 30, began cooking as a teenager in his native Rochester, N.Y., and attended culinary classes at Paul Smith's College in the Adirondacks. He and Piacente came to Richmond four years ago when her family moved here, and Matt took over the kitchen at Expressions at the Cultural Arts Center in Glen Allen.

Because one of Piacente's uncles knows Pagliacci's founder, Robert DeCapri, the young couple was among the first to learn that DeCapri's successor, John Garcia, was closing after a one-year run under the Pagliacci name.

The couple did much of the renovating themselves. The spruced-up downstairs dining room remains nonsmoking, while smoking is permitted in an upstairs bar and dining room.

The new owners didn't touch the outside of the century-old building, including its trademark mural of two children in a kettle, along with the phrase, "There's a little Italian in everything we make." S