Art 180's new project allows the kids to speak out. 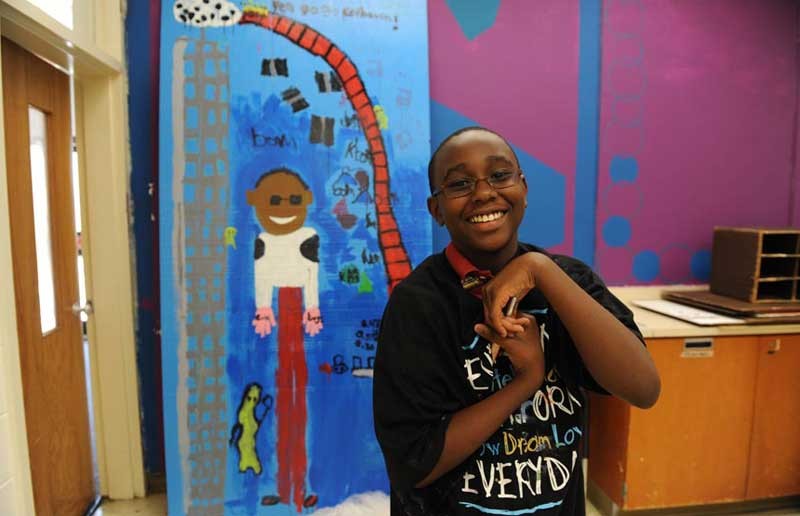 It all started with a very large, unwanted pile of plywood at the Virginia Museum of Fine Arts.

Art 180, a nonprofit that provides creative programs for at-risk youth in Richmond, decided to take the plywood and see what happened. "The way Art 180 often works is we all sit at our staff meeting and brainstorm together," program manager Betsy Kelly says.

The result is the gallery's public art project, "What Do You Stand For." During the summer, 25 sixth-graders from Richmond perched on chairs and tools in front of towering 8-by-4-foot boards at Boushall and Henderson middle schools in order to paint their way through that question. Before they met with the students, program leaders painted self-portraits as examples.

"The first day we came in there," artist and program leader Hamilton Gray recalls, "they saw the plywood boards and the ones we did and there was almost a look of defeat already. Directing them through that was very rewarding."

"I think there's something to the experience of having an adult who is not a family member asking you the kinds of questions that we asked for this project — that we try to ask in some way in all our projects," Kelly says. "Who are you? What do you want out of life? What do you feel passionate about? Entering into that conversation is sometimes frightening to these kids, but also these are some of the best conversations you can have."

On a perfect fall evening in October, "What Do You Stand For" opened to the public at a First Fridays Art Walk. The large art pieces reveal an array of themes, including the love of family, peace and faith, and the joy of a good hairstyle. "We don't show up with a script," Kelly says. "The program leaders have the very difficult task of laying out a project where they don't necessarily know what it is, honestly. Until the kids let you know what's on their minds or what they want to talk about, no one knows what the project is going to look like in the end."

Artist Lucia Lira-Colmenero, 12, stands by her painting, which depicts a cross, roses, dogs and the Mexican flag. "It was hard," she says, "but I can show people how I feel about everything. It is something good because it shows other people that they can show the way they feel. This was a good thing. It makes the world better and you can make friends while you're doing it."

A group of teenagers who are Art 180 alumni also canvass the crowd that evening, taking pictures and interviewing people about the incidents involving juveniles that marred the event over the summer. Questions focus on finding solutions to engage the young people attending in increasing numbers. "Most people agree that there needs to be a place for young people at that event," Kelly says. "Maybe there's not enough geared to them."

Art 180 plans to purchase a Broad Street space that will be run by students and used as a gallery and venue for performances, classes and events. "It could be the space downtown where young artists come," Kelly says.

The next stop for "What Do You Stand For" is Art Karma, ART 180's annual fundraising bash. From there, the exhibit will tour the city of Richmond during the next year, including stops at Rocketts Landing, the James Center, CenterStage and the Monument Avenue median strip.

It's already time for Kelly and the staff at Art 180 to come up with projects for next summer. "I think about what we ask our kids to do sometimes," Kelly says, "and it's scary because they have to look inside themselves and figure it out. They're very brave." S