Firehouse Theatre's "Cat on a Hot Tin Roof" is just about purr-fect. 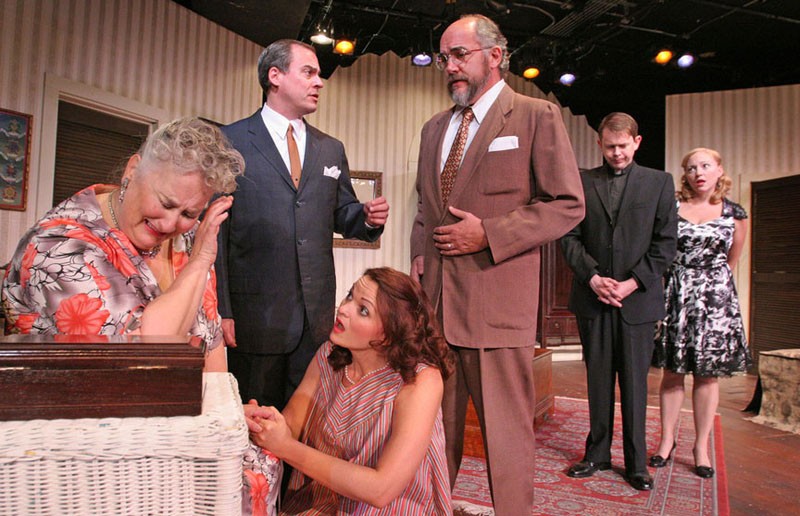 It's difficult not to draw comparisons between Firehouse Theatre Project's "Cat on a Hot Tin Roof," and the company's wildly successful run last season of "Who's Afraid of Virginia Woolf?" Both plays buck the Firehouse's norm of producing recent works, are season openers and employ the same director and two of the same actors. And both shows are examples of exemplary theater.

Tennessee Williams' masterpiece, the 1955 Pulitzer Prize­-winning drama of festering secrets and private desires, centers on the Pollitt family of the Mississippi Delta. Cotton baron Big Daddy has been suffering health issues, and his children and grandchildren have convened at the old family plantation to vie for their own slice of the estate.

At the heart of the maelstrom is Brick, the ex-football star who's become a drunk after the death of his best friend, Skipper. Adrian Rieder's portrayal of Brick simmers with a palpable tension that makes his periodic explosions all the more violent. Laine Satterfield brings measurable sensuality to every move of Brick's lusting wife, Maggie, whether lounging about on a bed or leaning against Big Daddy, stroking his lapels.

Alan Sader fills the stage with presence as Big Daddy, unafraid to be both tender and terrible in the same scene. And even when Big Daddy rips her apart in a brutal speech in act two, Jacqueline Jones' preserves a sense of dignity for Big Mama through her tears. Laura Rikard's Mae and Larry Cook's Gooper have completely fleshed out their supporting roles as Brick and Maggie's competing inheritors.

It would be easy for a play such as "Tin Roof" to veer toward melodrama, but director Rusty Wilson lets the story unfold naturally, allowing the dramatic peaks to stand out all the more. The physicality of the players' acting is nothing short of explosive — Rieder's wild swinging of his crutch at Satterfield and Sader's denial of the prop to Rieder are riveting scenes.

The missing walls of Phil Hayes' plantation bedroom set convey a sense of a home breaking apart, and hint that any utterance might be overheard by spying family members.

If the last two season openers are any indication of what happens when Firehouse decides to stage a classic work of theater, Richmond audiences should beg for more. S

This review has been corrected from the print edition.