Ash Daniel
We're a team of omnivores over here. But even with our meat-eating tendencies, it wasn't hard for any of us to come up with food items worth mentioning in a vegetarian roundup.

Narrowing our selections down to one each turned out to be the challenge.

And while none of us plan to say goodbye to bacon any time soon, we can't help but swoon over these veggie-based dishes.

I don't know how to make Sen Organic Small Plate's vegan pho and it's driving me crazy. I am no slouch in the kitchen. My stepdad is a former chef and my mom is a food writer and photographer. Our dinner table conversations are usually kicked off by some sort of food puzzle: "Can you tell what spices I used in this?" "How do you think this was cooked?" Usually we nail it.

This pho is my tantalizing white whale.

The menu describes a vegan pho broth with fried tofu skin, soy chop, daikon, carrot and oyster mushrooms. The bowl comes with sides of Vietnamese basil, peppermint, cilantro, bean sprouts, lime, jalapeño and Sen's homemade hoisin and hot chili sauces. Spelling it out makes it sound simple. This pho is anything but.

I've brought all of my family and many of my friends to this small restaurant at the east end of Cary Street. We sit across from each other, brows furrowed as we absolutely inhale the rich and complex broth. It teeters on sweet … brown sugar? But there's an umami that lingers. Mushrooms? Star anise?

We dive into the bowl with our chopsticks to fish out — tofu skin? Daikon?

I think we would have more success cracking the code if we didn't inevitably polish the pho off within 10 minutes. It's that good. — Lily Hargis is the daughter of Phaedra Hise. 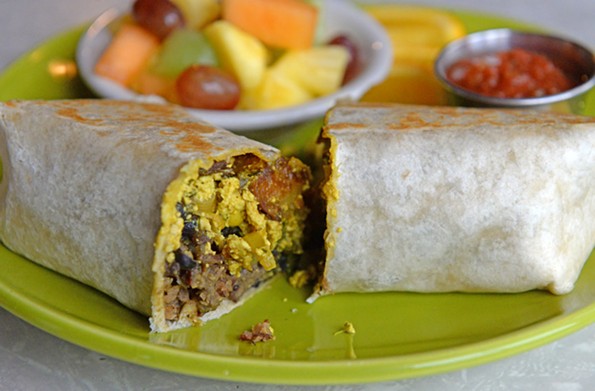 Folks, when I tell you that a solid breakfast burrito can be made without egg — trust me. If anyone could pull it off, it's 821 Cafe with its substantial vegan-friendly offerings.

As a nonvegan, egg-eating, brunch-loving professional, I understand the skeptics. Here's the thing: This mega breakfast pillow sent from the heavens consistently has flavor and that's more than I can say for some purveyors of such eats, both in and outside the city limits. Often these breakfasty concoctions are either too watery or greasy. Blech. Not so with this baby. Every tightly wrapped morsel is packed full of flavor, composed of black beans, vegan sausage crumbles, tofu scramble and potato. The best is that the bits are finely chopped so the mix is even throughout every savory and satisfying bite. That's right, no ginormous tofu blobs that we can all admit are weird to bite into anytime, but especially in a burrito. Bonus, you get a side with this plate and can snag grits, potatoes or fruit. Hint, it pairs well with the Buskey cider they have on tap, which is gluten-free.

Hangovers be damned, this one is served all day, every day! — Hilary Langford 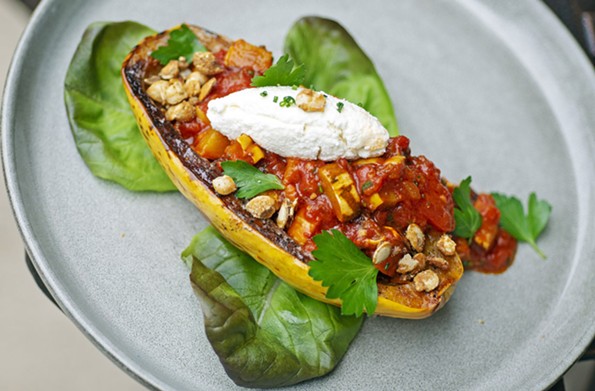 Between the fluffy buttermilk pancakes at Heritage and the inventive, house-made pasta dishes at Southbound, I've been particularly impressed with chef Joe Sparatta and company lately. The ramen bowl hiding on the Heritage brunch menu is divine, and his roast chicken is the reason to order chicken at a restaurant.

Back to Southbound. The roasted honeynut squash ($9) is an appetizer, but it is as robust as an entree, and feels complete as a vegetarian dish. The squash half, sliced lengthwise and skin on, is about the size of a dinner plate. Seeds in the center have been scooped out, and in their place rests a generous dollop of ricotta and a sprinkle of pumpkin seeds, toasted to a crisp, and the fleshy inside of the gourd is velvety and smooth. Pair that with a curried tomato warm salsa that lines the bowl. Each bite encapsulates those winter feeling you come to expect from an excellent January eat: nourishing, comforting and hearty. And I don't feel like I'm missing anything. — Nathalie Oates

True to form in the newspaper industry, I spent my first full day at Style running around from one meeting to the next with photographer Scott Elmquist. On our way back to the office between interviews, my new co-worker offered to treat me to a first-day lunch from the cafe across the street, which I had yet to visit. I thanked him profusely, quickly scanned the menu and selected the portobello sandwich and a bag of kettle-cooked chips.

A year later, this sandwich is still my go-to on days I forget (or just don't want) to pack a lunch. Slivers of crispy asparagus and raw red onion complement the meaty slices of balsamic-glazed mushrooms, and it's all topped with gobs of creamy, piquant Gorgonzola. That would be enough on its own, but the layer of pesto aioli slathered on the ciabatta makes it truly next-level. It's a little sloppy to eat, but it remains at the top of my list of Richmond sandwiches, vegetarian or otherwise. Occasionally I'll pair it with a salad, but seriously, go for the jalapeño-flavored chips. — Laura Ingles

Leave it to a restaurant with a focus on local beef to tackle a vegetarian version of a comfort food mainstay like spaghetti and meatballs and absolutely nail it.

Lucy's in Jackson Ward may have the most direct cattle farm-to-table pipeline in the city — the cows are raised on co-owner Amanda Lucy's family's farm in the Northern Neck — but chef Jason Lucy also serves one of the most unique meat-free dishes going.

For Lucy's non-spaghetti and meatballs, no cows are harmed in the creation of meatballs made of shredded artichoke, spinach and avocado, then fried to a crispy, golden brown. Served over sauteed spaghetti squash with an appealing depth of flavor thanks to caramelized onion pomodoro sauce, a little vegetable stock and butter, the dish gets a final, traditional flourish with a flurry of grated Parmesan. Between contrasting textures, supremely balanced flavors and the heartiness you expect from a plate of spaghetti and meatballs, it's a dish that satisfies on multiple levels.

Rather than relying on a meat substitute, the chef marries an array of vegetables and gives them the star treatment, resulting in a dish that's not only distinctive, but appetizing enough that even nonvegetarians have been seduced by its siren call. — Karen Newton