A hundred years ago, an English architect made his mark by forever changing Richmond's skyline.

Architect Alfred Charles Bossom (1881-1965) wanted to design tall buildings. Trouble was he lived in England where skyscrapers weren't being built at the turn of the last century. So he moved to New York — where, literally, the sky was the limit — and went to work for Clinton and Russell, an architecture firm with a fashionable clientele. In 1912, Bossom got his first stab at high rise design with a commission for the First National Bank here in Richmond. At 19 stories, it would be the city's first steel skyscraper and for 20 years its tallest building.

As the First National building turns 100 this year, the glorious landmark begins a new chapter as an apartment building. Finishing touches to the conversion, designed by Commonwealth Architects, are being made as 154 units are readied for occupants.

To describe the facade at 823 E. Main St. that wraps around the southwest corner of Ninth and Main as elegant is an understatement. It is nothing short of spectacularly monumental with four bays on Main Street and five bays on Ninth Street, the elevations defined by 50-foot, richly carved, fluted Corinthian pilasters and engaged columns.

These colossal piers support an entablature that explodes in classical ornamentation. On the fifth floor, Bossom ups the ante with windows that alternate with decorative medallions. From there, the building rises 10 more stories before reaching a crescendo with the second, even more elaborate, three-story entablature near the roofline.

First National provides a textbook case in how the first generation of high-rise exteriors followed strict, classical proportions and sequence.

Was Bossom, then only 30 years old, showing off in his design for First National? You bet. And while his architectural mentors at Clinton and Russell had confidence in his abilities to pull off this first effort, a more experienced architect, Francis H. Kimball, was engaged to double check his work. New York's George Fuller Construction Co. oversaw the structural steel engineering.

The First National Bank had been established in 1865, at the close of the Civil War and just three weeks after the evacuation fire that destroyed more than 700 buildings in Richmond's business district. Operating initially out of the Customs House (today the Lewis Powell Federal Courthouse) Robert E. Lee was one of its first customers. By 1900, First National was the largest of the city's 18 banks. After a merger, the bank became First and Merchants National Bank, since absorbed into Bank of America. 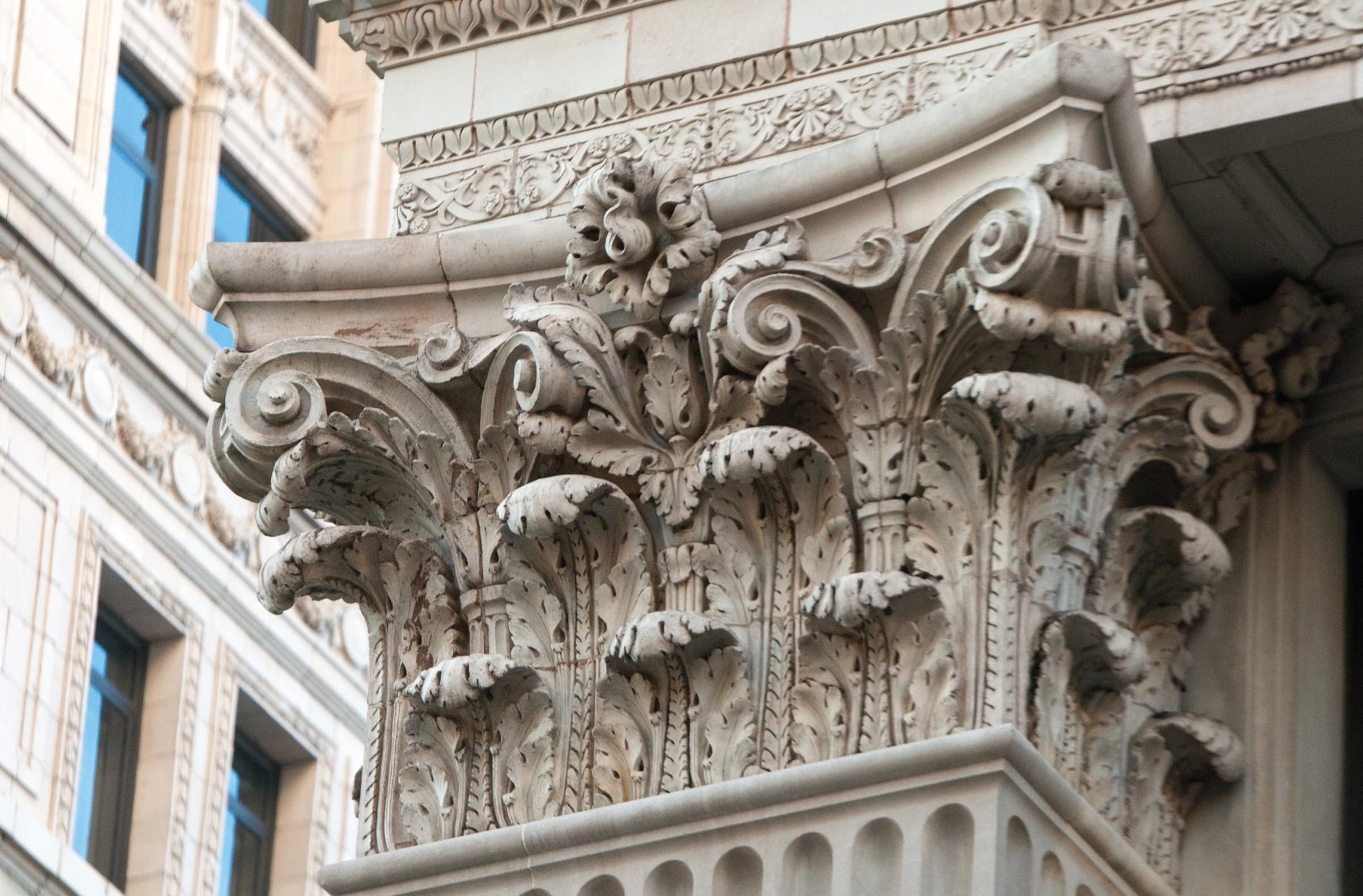 Today residents and visitors enter the freshly scrubbed building under a crisp, black canvas awning that recalls similar entries to upscale residences on Manhattan's Upper East Side. Once inside the lobby, it is clear that Bossom didn't skimp in his treatment of the public areas. The western, marble-clad wall of the elevator lobby is handsomely defined by a blind arcade of Roman arches. Combined with the richly coffered ceiling that has been painted gold and deep shades of green and blue, it's not a stretch to think you're in a Florentine palace. The former banking room, a soaring, light-filled space with large windows along Ninth Street, still retains the clever, glass partitions that were introduced during a sure-handed remodeling overseen a number of years ago by the Richmond architecture firm of Glave and Holmes. This space awaits a tenant.

On the former bank's upper floors, prospective tenants can choose from units that range from 690 square foot studios to 1,636-square-foot, two-bedroom apartments on two floors. Most of the kitchens flow directly into the living rooms to lend a contemporary feel. Views, especially from the upper floors, offer downtown panoramas of the skyline, the James River and Capitol Square.

Overall, Clinton and Russell and its highly talented young recruit, Bossom, would design an architectural body of work in Richmond that remains unparalleled both in quality and continuity. Consider: Two of the other three buildings that share the intersection of Main and Ninth — the Mutual Building (originally a much lower structure, in 1904) and the Pocahontas Building (the former State Planters Bank, in 1923) —were designed by Clinton and Russell. Bossom also designed the Virginia Trust Co. (now Tredegar Trust), with its iconic triumphal arch, next door to First National. And the year after he designed First National, Bossom was also architect for the 12-story Virginia Electric and Power Co. at 702 E. Franklin St.

It is fitting that Bossom's First National building has been converted to apartments because he also pioneered high-rise living here. The Prestwould condominiums and Johnson Hall, a Virginia Commonwealth University dorm that was originally an apartment house called Monroe Terrace, were built in the 1920s and frame Monroe Park.

So in Richmond alone, Bossom satisfied his ambitions to design high rise-buildings. But when he realized, to his chagrin, that his young sons were becoming too Americanized, he decided it was time to return to England. Elected to Parliament in 1931 as a Conservative, he spent his later years in public service, eventually gaining life peerage as Lord Bossom of Maidstone. S