Magical Blend: An All-Female Musical Version of “Alice in Wonderland” Comes to Richmond 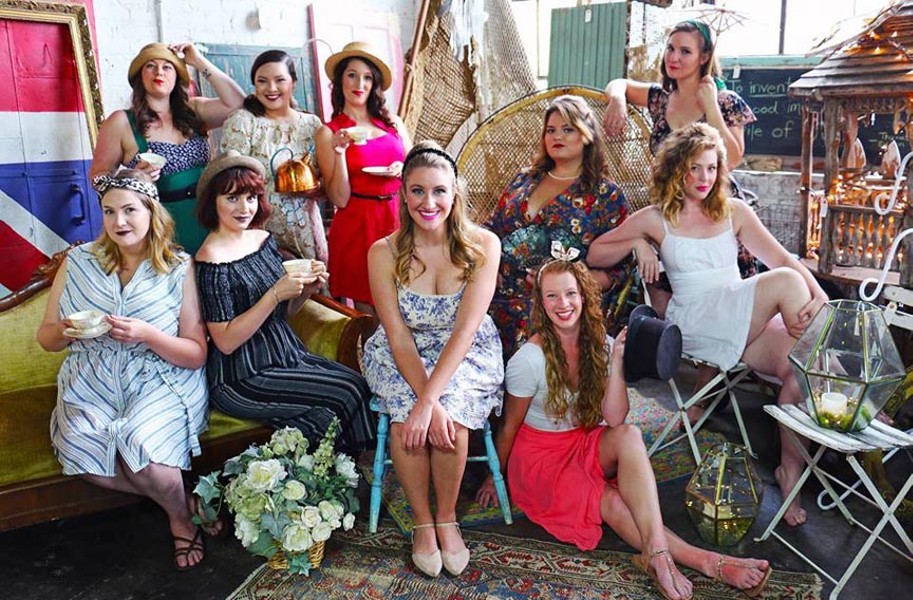 DeeJay Gray The cast of TheatreLab and Firehouse's co-production of "Alice," playing Aug. 12-20 at The Basement

For just two weeks, a journey down the stairs to TheatreLab’s basement space will be a trip down the rabbit hole.

Starting this week, the theater company is staging “Alice,” a new musical based on Lewis Carroll’s classic fantasy novels, “Alice’s Adventures in Wonderland” and “Through the Looking-Glass.” As in the books, the show follows Alice as she’s suddenly thrust into an underground whimsical world of talking animals and nonsense.

“It’s kind of a fantastical mash-up of ‘Wonderland’ and ‘Looking-Glass’ that takes pieces from each of them,” says director Adam B. Ferguson. “There’s definitely characters that people will recognize, your Mad Hatters, your March Hares, but then there [are new] situations to the story, all staying true to the life of Alice that Lewis Carroll created.”

Written by Andrew Barbato and with music and lyrics by him and Lesley Anderson, the show has been performed previously only a handful of times.

“This is the first time Andrew hasn’t directed the show or been directly involved with the production of the show,” Ferguson says.

Ferguson was initially introduced to the show by a friend who was part of the theater company that helped create the musical. He’s tried to bring the show to Richmond stages ever since and says the music was what initially captivated him, jumping among traditional Broadway, gospel and other styles.

The Richmond staging will include parts of the show that haven’t previously been performed, including “tweaks here and there, as well as a song that we’re adding back into the script that they came up with originally, but hasn’t been used since,” Ferguson says.

This production will also be the first to feature an all-female cast.

“I was really drawn to the idea of an all-female cast since the story is about Alice coming into her own and growing up and becoming a young woman,” he says. “To me it’s very interesting to have all of these characters being portrayed by women, because they’re kind of guiding her through this journey of hers.”

Instead of using a traditional set, “Alice” will rely heavily on props and costumes to set the scene.

“It’s a very sparse staging. We use platforms for different levels. Props are used very creatively for various settings,” says Rachel Marrs, who stars as Alice. “It’s mostly suitcases and ladders, so it’s almost industrial, but it has this cool, whimsical feel about it.”

Marrs says the show is upbeat and kid-friendly.

“It’s the traditional, coming-of-age story for Alice. She starts out as sort of a grumpy girl who doesn’t want to grow up, and goes through all of these amazing adventures,” she says. “The music is amazing -- the script is fresh and fun and has a lot of humor in it. I think there’s something for everybody in the show.”

Considering how many incarnations of the story exist -- including the famous 1951 animated Disney film -- costume designer Maggie McGrann says she’s had to decide whether to refer to earlier versions. She’s decided to go for a mix of 1945-1955-era vintage crossed with modern silhouettes.

“We’ve had a lot of fun deciding what to lean into,” McGrann says. “I’ve decided to kind of invent my own category of vintage. Since we’re really out of time and place, we get to pick a bracket of real-world inspiration, and then infuse our own decisions within it. Adam and I worked very closely on establishing a very tight color palette. We are leaning into a sort of tight reference to the Disney movie.”

She says the story’s blend of reality and imagination is how true growth and happiness are found.

“The musical’s going to be really fun and really heartbreaking all at once,” McGrann says. “The best kind of theater, in my opinion.”