Magic Touch: A séance tells the story of P.T. Barnum 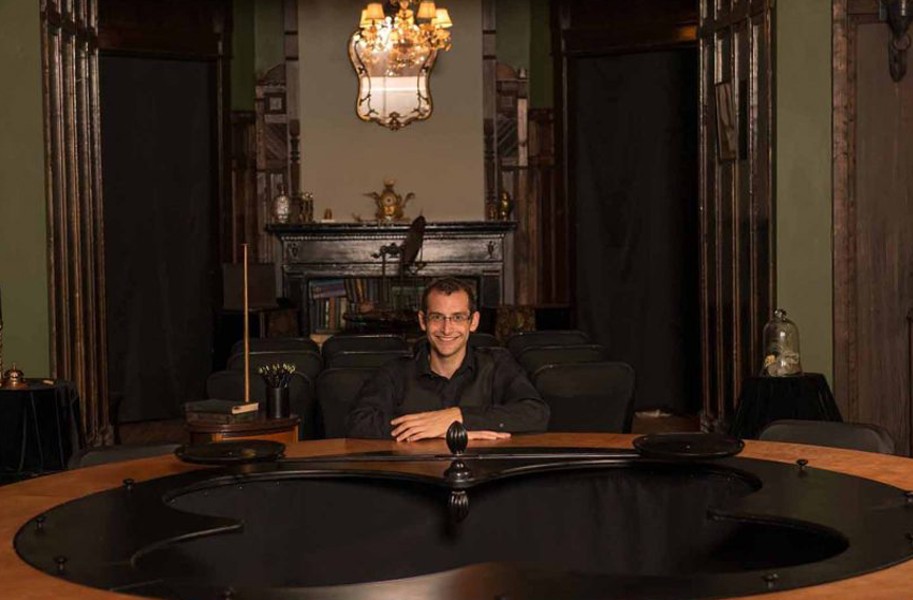 David London was 7 years old when he discovered that he was a magician. By the time he was a teen, he'd found that magic was a great tool to tell stories and explore ideas.

He wrote his first séance in high school, but never performed it.

"I've been fascinated with séances for over 20 years, but for most of that time I struggled with the ethical aspects of actually presenting a séance, even a theatrical séance, for the public," he explains.

It was in 2017 while curating his first major museum exhibition, "Inescapable: the Life & Legacy of Harry Houdini," at the Jewish Museum of Maryland, that he began working on "Humbug: the Great P.T. Barnum Séance." The Branch Museum of Architecture and Design will play host to five performances.

London recalls creating "Humbug" as a way of processing his first full-fledged museum project. But it wasn't just Barnum's museum past that garnered his interest. Rather he wanted to create a show that directly explored the process of curation and exhibition, as well as the display of genuine artifacts versus reproductions, fakes and phonies.

Most of his artifacts came from eBay or directly from collectors, including prize finds such as the miniature wedding album of Tom Thumb, small photos of many of Barnum's Living Wonders and a copy of his autobiography owned by Barnum himself.

"He also had a history of walking the fine line between fact and fiction, truth and lie, which are subjects that piqued my interest as a magician," London says.

Interestingly, Barnum hated séances and spoke against them, noting that they took advantage of those mourning the loss of loved ones. "He considered spiritualists the bad kind of humbug and exposed their methods throughout his life."

"Humbug" first premiered at the Peale Center in Baltimore, housed in the oldest museum building in America, which provided London inspiration to uncover and share Barnum's history as a museum man.

Throughout all of London's performances, he utilizes magic tricks to tell stories and explore ideas. In the first part of the show, illusion is used to illuminate the story of Barnum's life. During the séance, some illusory techniques are used to reproduce effects generated by Victorian-era spiritualists.

Central to the second half of the show is London's elaborate séance table. At 9 feet in diameter, it accommodates him and 12 guests. It was constructed with several moving parts, allowing those seated at the table to move objects to its center to hold a place of focus, as well as to pass objects to one another.

"When most people imagine a séance, the first thing that comes to mind is the séance table," he explains. "It was important to me to have a table which not only lived up to, but far exceeded, people's expectations."

Two levels of seating have been created for the séances. Inner circle guests are guaranteed a spot at the table where they select artifacts from the first half to bring to the table and have personal experiences with. Observer seats are located one row back, just behind the inner circle.

The group then utilizes the artifacts to embark on recreating a Victorian-style spiritualist séance to summon the spirit of P.T. Barnum and his cast of curious characters.

Museums have always been places that foster creativity, tell cultural stories and serve as homes for new and novel experiences, which is why he uses them, London says.

Richmond's series of séance performances are being presented by Firehouse Theater, which has hosted a variety of London's shows over the past four years. When Joel Bassin, producing artistic director at Firehouse, began contacting museums and historic sites around Richmond to find a suitable partner to hold the show, the Branch responded enthusiastically.

"I made the trip to Richmond to visit the museum and immediately fell in love with it," London recalls.

While he hopes the shows teach audiences about the unusual life and career of P.T. Barnum, mainly he wants to foster dialogue about the fine line between entertainment, exhibition and education.

"When most people think of Barnum they think of the circus, but Barnum didn't actually get into the circus business until he was over 60 years old, as sort of a retirement project," London says.

"With so much myth surrounding his life, people are often surprised by the unbelievable truths of Barnum's amazing life."